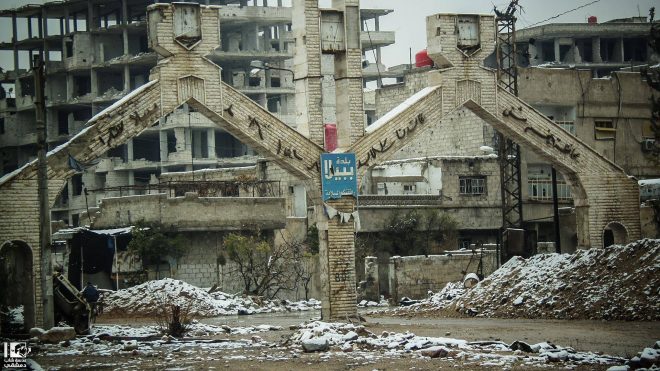 While the regime hurries to impose “reconciliations” on the cities and towns of the capital’s countryside, it is tightening the noose on the southern districts of Damascus and imposing a siege upon them, provoking residents’ fears of starvation.

It appears that the issue of negotiations in the towns and districts of southern Damascus are more complicated than elsewhere, as they appear to be all but halted in this area, in contrast to the capital’s environs that saw a series of agreements which resulted in the signing of “truces” and “reconciliations.”

Activist Eyham al-Omar told Sada al-Sham that “a local united political committee was recently formed to hold negotiations, but it has not yet signed any reconciliation deal with the regime, which is still maneuvering and giving the revolutionaries in southern Damascus a deadline of several months.” Omar continued by saying that the areas of southern Damascus, “have not completed a reconciliation process yet under the pretext of the presence of the Islamic State group and Jabhat Fatah al-Sham (formerly Nusra Front), in addition to fighters of the Free Syrian Army, who number more than 10,000, which makes evacuating them to northern Syria in a single batch difficult for the regime.”

However, while southern Damascus is witnessing a stable humanitarian situation thanks to the Bebeila-Seidi Miqdad crossing, unemployment is spreading among youth in the area, which makes it hard for citizens to eke out a living, despite the acceptable prices of goods.

Omar noted that, “Residents are suffering from difficult living conditions because of their inability to buy food because of rising prices on one hand, and the spread of unemployment and the lack of work opportunities on the other. This is in addition to the great weakness in the work of aid groups.”

He continued: “Residents are afraid of the spread of hunger in the area, as a result of regime forces controlling the entry of foodstuffs through the checkpoint, which they close when they want to pressure the civilians. The traders also control the prices of foodstuff, and they double them when the crossing closes. With regards to bread, it comes in daily to the area so that each person gets one loaf per day.”