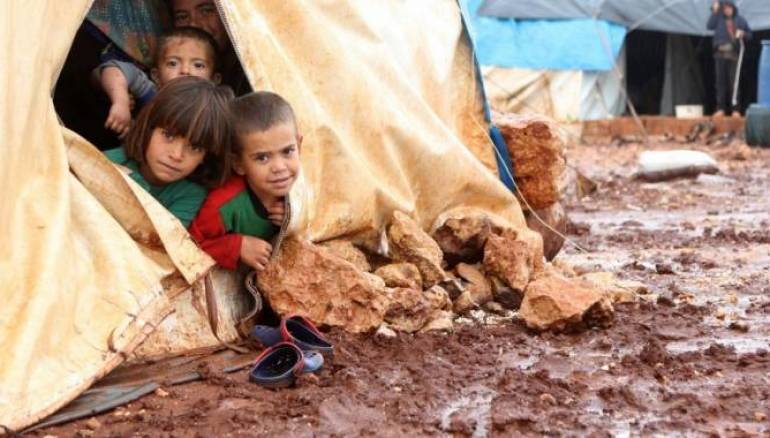 The Syrian winter has increased the suffering of displaced families in camps in the southern Daraa province as opposition parties and humanitarian relief organizations continue to ignore their calls for help, activists said.

At the same time, the regime blockade on the area has also isolated displaced families from their essential needs, according to activist Qusay Horani. He said that the lack of funds and resources from agencies supporting people in liberated areas has worsened the situation, adding that “many families own nothing and only rely on the support they receive form aid agencies, which is already not enough."

Abou Kassem, 51, who lives in the Zayzoun camp, explained: “the situation in the camp is miserable and has only limited services, moreover, winter with cold weather and rain has exacerbated the bad situation as water and mud entered tents.”

He added that families have nothing to keep themselves warm in the bitter cold without any money, pointing out that all the camp's residents are displaced people who had escaped their homes with nothing because of the regime’s bombardment.

Abou Kassem said that in the beginning some organizations provided help to displaced families, but aid has since dropped. He appealed for humanitarian organizations to immediately intervene to provide for displaced people who are surviving in difficult conditions.

"Om Jasser," 45, a mother of four from the Zayzoun camp, said: "We left the countryside of Damascus to this camp, aiming to find our living needs, but conditions are tough on all, as aid and goods are not enough, I have only God to rely on, (after) losing my husband in battles with the regime forces.”

She mentioned that services are almost completely absent and there is not enough food, while residents live with poor medical services and without fuel or means of heating. She called on representatives in the opposition Coalition and their interim government to visit the camp in order to evaluate the needs of the residents.

"Abou Marwan," a humanitarian activist, confirmed that many camps have spread throughout southern Syria near the villages at the Jordanian boarders as thousands of families fled fighting in Daraa, Homs, Damascus and Quneitra.

He explained that all camps suffer from a lack of water and electricity, as well as no medical and educational services, adding that tents are too few and are in a bad condition due to severe weather conditions.

He pointed out: "Aid and relief organizations and associations seem to have become unable to provide any services for the growing numbers of displaced people, due to the lack of funds and depleting most of their resources to cover the ongoing situation the Syria."