Around 350 residents in the neighborhoods of Al-Riji and Ain Ghazal are enduring heavy suffering due to an ISIS blockade amid a lack of clean water, food and warmth, Iqtissad writes 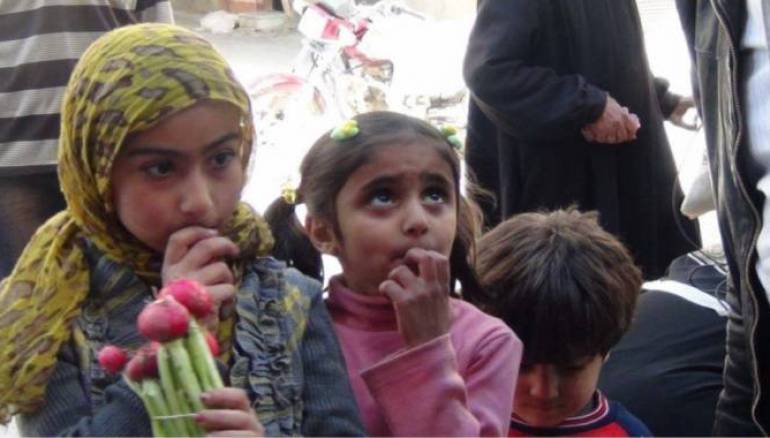 The Islamic State group has blocked a food supply route to the western neighborhoods of the Yarmouk refugee camp south of the capital, worsening the already severe living conditions of hundreds of people, residents said.

ISIS closed the only remaining humanitarian route to the Jabhat Fateh al-Sham-controlled neighborhoods of Al-Riji and Ain Gazal in western Yarmouk after 350 residents, mostly women and children, refused to leave their houses.

The western part of the camp is currently being besieged by both ISIS and pro-Assad forces. ISIS blocks the southern and western sides of the camp, while the regime’s forces prevent movement to areas controlled by the regime-allied Palestinian militias in the west and north.

The sources added that residents in the neighborhoods of Al-Riji and Ain Ghazal are living through tragic conditions due to a lack of clean water, food and warmth, as civilians use plastics and trash for heating and cooking.

The people of Yarmouk have appealed countless times to free them from the ongoing conflict in the camp and allow food, drinking water and other needs to enter their areas.

Umm Alaa, a resident of the besieged Al-Riji neighborhood, said: “We live in oppressive conditions due to siege, I am 50 years old and I have diabetes and I need medications, but the barrier has been closed for more than 20 days, no food, no water, the Syrian regime surrounding us from one side and ISIS from the other.”

Dr. Mamdouh Abou Idris, the director of a medical rescue center in the west of the camp, said: “We are subject to a double blockade that has been forced over the area for almost a month, civilians and the whole area suffers (from a) shortage of medicine and medical needs such as bandages and sutures.”

The doctor explained that many diseases have spread due to unclean and contaminated drinking water, as well as consuming rotten food. He said that people do not care about the condition of their food, which has caused them typhoid fever and bowel infections, as well as the spread of respiratory diseases and allergies due to the melting of plastics in heating and cooking.

Abou Idris says that civilians from 90 families have been punished by the crisis inside the neighborhood, and calls for all parties and institutions help them escape the siege, hunger and disease.