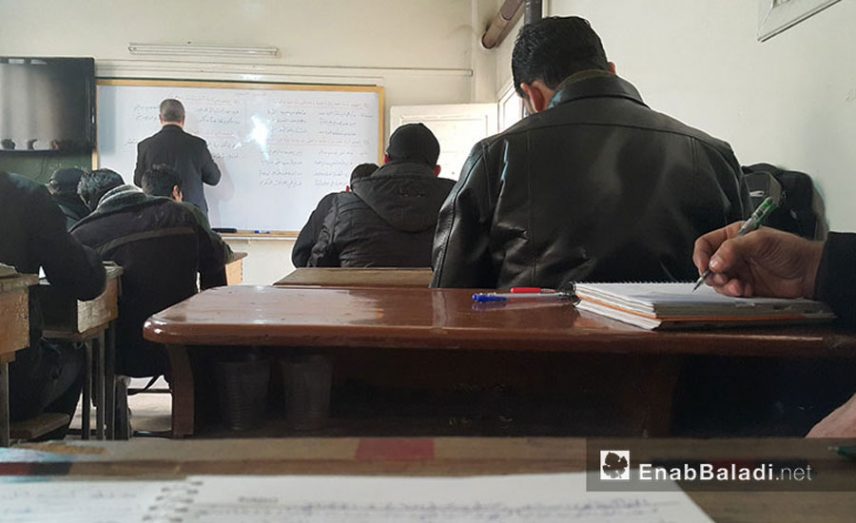 After she lost hope of returning to study in the Damascus University department of literature, Naamat al-Damashqi (25) registered in the French literature branch in the community colleges in the Ghouta suburbs outside the capital. Naamat, who now works as a teacher in Ghouta schools, is one of dozens of people who have returned to school in the Ghouta, mostly graduates and activists following up on education from the community colleges, academies and virtual universities.

Those whom Enab Baladi surveyed believed that this step would help them improve their work with institutions and organizations in the region despite facing major difficulties in distributing their time between study and work.

Before the start of the Syrian revolution, Bayyan Reehan, head of the women’s bureau at the local council in the city of Douma, reached the fourth year in the capital’s academy for geography but was not able to finish her studies. She says that she enthusiastically joined in with the beginning of the protests and stayed away from school, like hundreds of others like her.

Academic and intellectual achievement is one of the ways people are trying to adapt to the circumstances of the war in the Ghouta, according to Bayyan, who began to teach English while taking an online course in local administration with the Arab Reform Initiative, overseen by a Swedish university.

Bayyan believes that any platform available for residents inside Syria is a resource to gain skills and knowledge, saying that “there are many opportunities for activists, and so a large number of them are studying along with their work. There’s a race to acquire knowledge among us.”

According to Bayyan, the activists trying to complete their studies “will qualify them with the knowledge they acquire to carry out their role with the beginning of the reconstruction stage in Syria.”

The community colleges and academies of the branch of Aleppo University in the Ghouta require that the students have general secondary degrees of 2009 or later to apply, but does not accept degrees the student obtained in previous years.

The current academic year which began in October accepted degrees from 2005 as well as degrees from as late as 2000 for women only.

While the colleges and academies require that the student be younger than 35 years old, the current year saw an exception.

The university division of the community colleges includes a number of specialties: English, Arabic, French, math, general sciences, physics, and teaching, in addition to the forensic science college, business administration, accounting, and the medical college with anesthesia and laboratory specialties.

Alongside the colleges, the eastern Ghouta area is home to veterinary, economics and dentistry schools under the auspices of Aleppo University.

Although the colleges and universities are still unrecognized, those responsible for them say they are in continuous communication with international universities and colleges to acquire accreditation.