Sada al-Sham reveals story behind scores of women held prisoner for years, and the attempts by civilians and activists to negotiate their release in the face of negligence from authorities 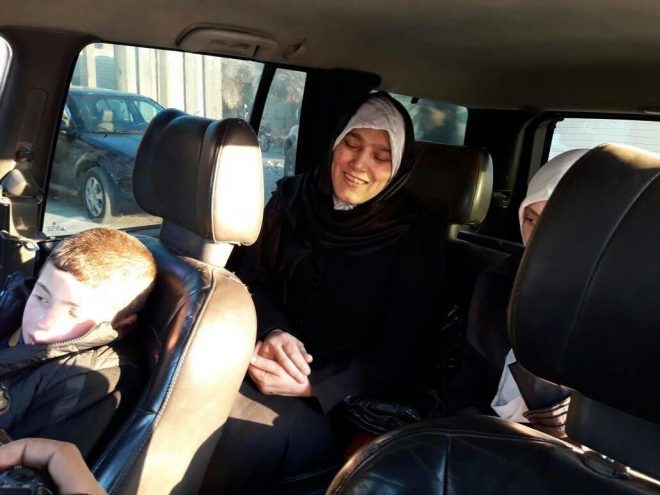 After three years, the curtain has finally been drawn on the issue of families detained by rebel groups on the Syrian coast following a prisoner exchange deal with the Assad regime in the town of Qalaat al-Madiq in the Hama countryside. According to the deal, 54 women held by the rebels will be released in exchange for a similar number of prisoners from the Assad regime’s prisons.

The delay of the deal for a number of years has raised many questions around the details of the negotiations and the party that would implement them, the reason for the regime's intransigence in including any prisoner from the coast within the exchange, and the extent of the likelihood of establishing similar deals in the near future.

The development comes as a surprise after rebel groups held 104 women and children for three and a half years after the offensive "Aisha, mother of the believers," in August 2013, which was waged in the Lattakia countryside and resulted in the liberation of close to 15 villages from regime forces control.

The general director of the ‘Public Institution for Prisoner Affairs’ (or PIPA, a civilian institution working in liberated areas) Zaid Abou Zaid, said that "two months ago the fighters from the coast asked the institute to negotiate the release of the female prisoners held for a number of years. Through communications with channels from the regime, the other party agreed to carry out an exchange operation with the same number of female prisoners and detainees."

According to Abou Zaid, the level of cooperation increased recently between the civilian institute and various rebel groups, and rights activists working with them had taken on the responsibility of carrying out the negotiations. He added the efforts over the next few days would involve more exchange deals, indicating that families of prisoners could contact the institute to record the names of the prisoners and document them to include them within any coming deals.

After the exchange deal, the institute published on its official Facebook page a statement claiming that thousands of messages had flooded the page of the institute. The institute said in its statement that this issue required massive efforts that it was not within its capacity to undertake, and hoped the local councils, public service administration, municipal councils, rights groups, activists, documentation offices, and all factions working on the ground which it was not able to reach would carry out their duty toward "oppressed" prisoners and would document their names through approved lists of the institute, adding its apologies that it was not able to receive the names individually or randomly.

The issue of the prisoners of the coast witnessed a number of changes, with them swapping hands from the Islamic State group to Jabhat al-Nusra before they left the region. However, the high cost of caring for the prisoners and securing food for them pushed — according to sources on the coast — the Jabhat to deliver them to the ‘Al-Shaheed Mustafa Mirza Brigade,’ a Free Syrian Army faction in the area.

Over 2014, the United Nations oversaw the conclusion of a prisoner exchange between the Jabhat al-Islamiya (Syrian Islamic Front) and Iranian prisoners which included a portion of those from the deal; 40 female prisoners and a child were released from among those prisoners, with 54 remaining imprisoned for three years.

Speaking to Sada al-Sham, the military leader of the Mirza Brigade said that "the regime more than once struck the place where the prisoners were being held with warplanes and barrel bombs in the area of Marj Khokha and Salma, before they were transferred to areas near the Turkish border."

The military commander directed thanks to the Salma Operations Rooms and the humanitarian groups that contributed to securing the expenses of the prisoners and protecting them, which amounted, according to him, to more than 200,000 US dollars.

The military commander, who asked not to be named, added that "the families received the best treatment and they were not put in closed prisons — as the regime did — but in houses inside a village close to the Turkish border, where they were given full healthcare and medicine."

Three female prisoners had been released previously and delivered to Turkey as a goodwill gesture, however the regime refused more than 15 attempts to open the door to negotiations, because of a desire to show that the opposition was insistent on arresting women and to increase sectarian tensions.

Regarding the reasons for the lack of any prisoner release from the coast despite popular demands in the area, the commander said that, "the regime insisted on the list that it presented without any amendments." He added, "the desire was to release a larger number of women, however, the regime was hesitant and did not care about the success of the deal, and so we were forced to accept the minimum of our ambitions."

Rebel groups over the past few years have broadcast videos of the prisoners calling on the regime to negotiate for them, and in these recordings they appeared to be in good health. However, the Assad regime — according to the commander — refused mediation from the United Nations and international organizations more than once, despite figures close to them entering the negotiations line, in addition to others including Mohamed al-Sheikh, an assistant to Aymen Jaber, head of the pro-regime Suqour al-Sahara militia.

In the same context, the military commander in the First Coastal Division, Yazin al-Shami, said that "a number of previous negotiating experiences with the regime failed on the coast, especially when the matter was related to fighters or officers from among its own recruits, the opposite of what happened if the prisoner was from Hezbollah or an Iranian militia."

Shami downplayed the chance of possibly concluding similar deals in the coming period, saying that, "the regime waited three years to accept negotiations over women from among its supporters, so how will it deal with the fighters and officers we have?"

It is worth noting that the latest period saw a number of prisoner exchanges between the Assad regime and the opposition forces, with the largest portion involving women, as what happened recently in the eastern Ghouta and Daraa.