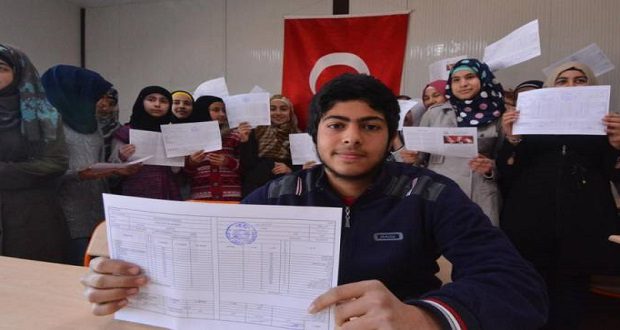 Abu Ali's hopes that his daughter Fatima would attend a Turkish university after his four sons were forced to leave school and work in Turkish factories to make a living have been shattered.

“She was my only hope, but then they issued this decision and broke my heart and killed its last hope,” he said.

Fatima, who had finished eighth grade with honors, can no longer complete her education. "I was top of my class, but now math is the only subject I understand in the new curriculum," she said.

The Turkish government had issued a decree a few days before the start of the school year that the Turkish curriculum must be taught for all first, third, and ninth grade students. This decision was reported on the website of the Ministry of Education in the Syrian interim government.

The new decree increased the challenges facing Abu Ali’s family in educating Fatima. "My father used to walk me to school every day because we couldn't afford to pay the school bus fee, and now he won’t be able to afford a private tutor to teach me Turkish. I have disappointed them all,” Fatima said.

Other Syrian families see the bright side of the decision. Umm Mohammad finds it reassuring that her children will now receive official certificates that would allow them to enroll in universities. “Certificates from Syrian schools are not officially recognized,” she said.

Syrian students who apply to Turkish universities have to sit for a standardized entrance exam regardless of their high school grades.

The new decree did not prevent Umm Mohammad, however, from enrolling her daughter in fourth grade which is not included in the government’s decision.

"The enrollment procedure is long and the most complicated part was getting the signature of the mukhtar who requires that the Turkish landlord be present,” she said, adding that she did not know the landlord personally as she paid her rent to an office instead. “However, I managed to enroll her to give her a chance of a better future,” she continued.

Umm Mohammad, who hopes for a better future for her two children Mohammad, in grade one, and Rama, in grade four, also faces difficulty in educating them. She cannot afford a private tutor to teach them Turkish and depends on their knowledge of the language to help them with their studies. “I try to help by using my knowledge sometimes and by translations at other times,” she said.

The decision also had ramifications for Syrian teachers who work at Syrian schools in Turkey. Wissam, a schoolteacher, fears for the future of her family whom she supports with her work. She said if the decree is implemented in full, all Syrian students will be forced to enroll in Turkish schools by 2018. “This means that Syrian schools will be closed and we will lose our jobs,” she added. Wissam believes that in the future, Syrian teachers will be hired based on their knowledge of Turkish, and she is already taking Turkish language classes so she does not "end up on the street.”

For its part, the Syrian Ministry of Education said that they are working towards mitigating some of the negative effects that the decision will have on the future of Syrians. Deputy Minister Ahmad Ali said “the Turkish government did not discuss this decision with us, but we met with them recently and demanded that Syrian students be taught Arabic language and history in addition to the Turkish curriculum.”

As for the problems facing Syrian teachers, Ali said that they are planning to train them on learning and teaching the Turkish curriculum in groups of 5,000. He added that teachers who will receive the training must already hold recognized degrees in their respective fields.

This article was edited and translated by The Syrian Observer. Responsibility for the information and views set out in this article lies entirely with the author.