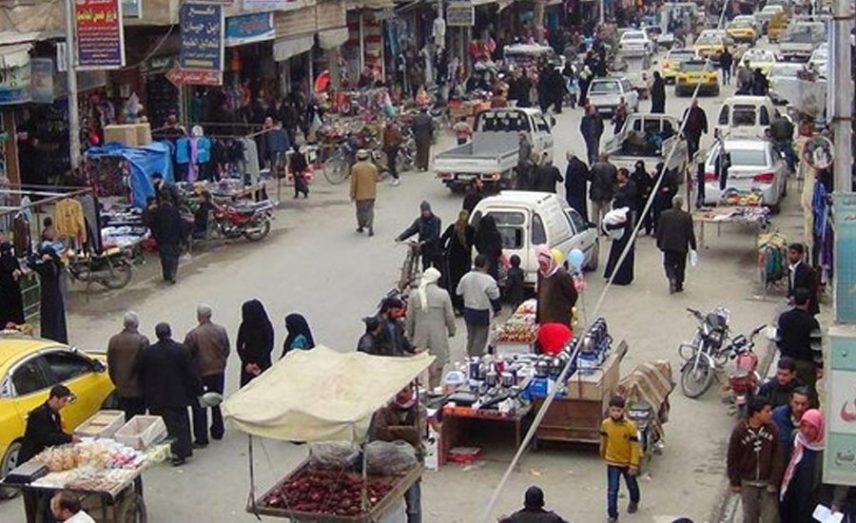 Thousands of civilians in the city of Raqqa and the surrounding villages have been turned into displaced people in their regions with the launch of the Syrian Democratic Forces (SDF)'s campaign, which is led by the Democratic Union Party, on February 17, 2017. The launch was the second step in the third stage of the “Euphrates Rage” operation with the aim of isolating the city of Raqqa from Deir-ez-Zor.

The spokesman for Raqqa is Being Slaughtered Silently campaign, Mohamed al-Salah, told Souriatna: “People’s fear of being prevented from returning has pushed them not to move far from their villages. So most of them have taken to preparing themselves with tents and water tanks to move to farmlands around their villages until they are able to return to their homes as soon as possible if the fighting ends between the SDF and the Islamic State group.” He added that the people “are afraid that what happened to the people of Tel Abyad, Selouk and Ain Eissa will happen to them — they are still subject to long security checks before they are permitted to return.”

Most of the displaced of the Raqqa countryside, who are from the village of Tel al-Simin and the Kaniz area and had been living in camps near the village of Ain Eissa, have returned to their villages and only a small number remain, amid the absence of any support from aid and humanitarian groups. For that reason, the displaced people are depending on themselves, mostly grazing livestock to earn a living.

Meanwhile the prices of foodstuffs in the city of Raqqa have gradually increased, especially over the first two days after the main bridges to the city were targeted. This is due to people’s fear of a siege and the demand for buying items that are available. Salah said that “it is likely that the prices will rise if the situation stays like this, especially since the traders are citing an increase in prices because they transport goods with trucks that are unloaded on the southern bank and then they transport them with ferries and boats to the city in exchange for specific fares which they add to the price of the goods.”

Drinking water has returned after being cut off for two days as a result of the targeting of the bridge and the pumping pipes under it, while electricity is good, with 10-15 hours provided daily.

The Raqqa is Being Slaughtered Silently campaign announced that the international coalition “has pursued a new policy over the last few months in the war against the Islamic State group, focused on targeting infrastructure and public facilities of the cities and towns which the group controls.” It added that “with the beginning of the Syrian Democratic Forces’ ‘Euphrates Rage’ operation with the aim of taking control of the Raqqa countryside and besieging Raqqa, aircraft have started to destroy the main and secondary bridges in the city and its northern suburbs which completely isolated the southern bank of the Euphrates on February 2 as a result of damage to the two main old and new bridges.”

How does the SDF deal with the villages it controls?

The Syrian Network for Human Rights said in a new report the the Syrian Democratic Forces carried out ethnically-motivated arrests and raids at the beginning of 2017 under the pretext of pursuing Islamic State cells in majority Arab villages in the Qamishli and Raqqa countryside.

Abu Amjad, one of the displaced civilians in the Raqqa countryside, said that the Syrian Democratic Army “are a threat to the existence of Arabs in the Syrian Jazira, because they have begun to replace the names of the villages they control and even the roads, street, boulevards and schools, and especially in the Tel Abyad region and the villages and regions. They have cleared out dozens of villages under the charge of supporting ISIS, and have imprisoned thousands of people from the northern Raqqa countryside on that basis. Many of those who remain have been forced to military camps to be conscripted to fight."

The witness added: “They arrested my sister’s husband five months ago and demanded 3,000 dollars in exchange for releasing him, while we live under unbearable poverty. A number are forced to work for 100 lira a day, which amounts to systematic starvation, but no one dares say anything.”

According to Umm Jassim, the Syrian Democratic Forces aim to expel the residents to Turkey by trying to forcibly conscript them to fight the Islamic State group, as well as blockading their sources of livelihood, which results in rising prices and a lack of fuel and of some foodstuffs and medicine, in addition to the arbitrary arrests of people on the pretext of having a connection to the Islamic State.”