The rebel groups’ strict regime of control of public space along with their utter disregard for the security of public life and property proves fatal, as the public take to calling for the regime’s return 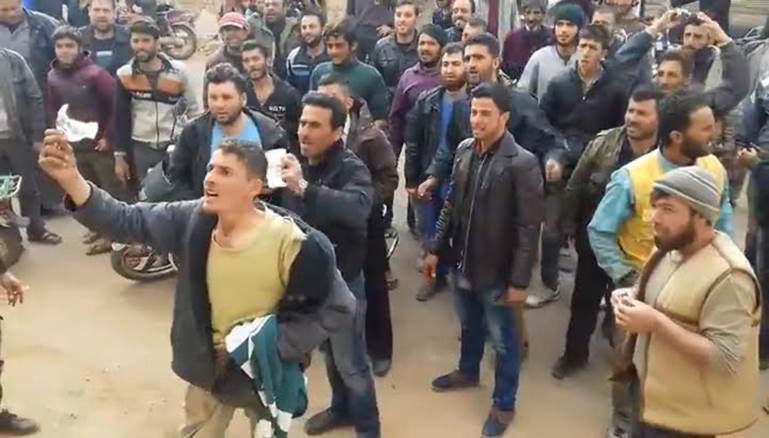 A video clip has circulated on social media showing some people from the town of Tramla in Shashabo Mountain in the southwestern Idleb countryside expressing happiness at the regime’s aerial bombing of the military bases in the town which overlook the al-Ghab plain in the vicinity of the active fronts in the Hama countryside.

The local council in Tramla issued a statement responding to the accusation that people in the town were chanting to support Bashar al-Assad, accusing four people who were described as “weak minded,” adding that orders have been issued to deliver them to a Sharia court. The council has vowed to “strike with an iron hand anyone who tries to compromise the Syrian revolution.”

The town of Tramla, with a population of about 2,000, has been subjected to heavy bombardment from rockets and jets as it houses military bases inside the town, located in northern Hama countryside close to the towns of the al-Ghab plain. People have come out to the streets to demand the evacuation of the bases inside the town and protest against the rebel groups, whom they say “spill civilian blood.” A number of the demonstrators have cheered for Bashar al-Assad, chanting, “Hafez Assad … symbol of the Arab nation.”

Activists have detected the influence on the town of the shabeeha thugs form the nearby villages in the regime-controlled areas in the northern Hama countryside, saying that all the areas outside regime control are targets for their jets and military campaigns. The bombardment of Tramla coincided with jets bombarding the city of Ariha in central Idleb without provoking any reaction from the residents of the “bride of the north,” which has been ravaged by massacres.

Meanwhile, others have considered such developments a legitimate outcome of the complicated situation. The liberated areas have witnessed increased repression of public freedoms, a state of turmoil, rampant favoritism, assassinations, suspicious killings, and the prospect of the return of a Baath-like experience in the liberated areas under a different political system.

What transpired in Tramla is reminiscent of similar developments in various areas in the Idleb countryside. Lack of security is the most salient problem faced by the population of the province, with a prevalence of military checkpoints tasked with arresting fighters from other groups in inter-factional fighting. Acts of robbery with impunity have also spread; there is a vexing lack of laws or executive agencies tasked with maintaining security in the liberated areas, especially on the roads. Assassinations have become daily occurences, with unidentified bodies lying along the stretch through the Idleb countryside to Hama in the south and to the Turkish border in the north, and from the western Aleppo countryside to the Jebel Akrad in Lattakia.

The rebel groups have been focusing on “scraps” according to the media activist Abu Bakr Jebel, while neglecting the basic affairs of civilians, resulting in public discontent as they have to stand helplessly in the face of frequent kidnappings carried out in broad daylight. Abu Bakr told al-Modon that the rebel groups are “concerned with preventing mixing in the universities, schools and hospitals, with how women dress, with preventing the Syrian revolutionary flag from flying in demonstrations calling for civil and democratic rights, while they neglect the maintenance of security, as military checkpoints concern themselves with arresting and stripping fighters from other groups of weapons and raiding their bases inside the cities and towns. In the end, only the civilians are suffering and receive no redress.”

The incident of shutting down Radio Fresh, under the authority of the Union of Revolutionary Bureaus in the city of Kafranbel in the southern Idleb countryside and the repeated confiscation of their equipment on the pretext that the songs they played were the “reason for the delay of victory” and a “manifestation of corruption in society” clearly demonstrate the extent of the security councils’ interference in civilian life. Meanwhile, concerns about public needs, rising prices, and a security breakdown remain unaddressed.

The incident of the Kellawi Hospital in the city of Jisr al-Shughour in western Idleb provided another pretext for the intervention of rebel groups in the medical field as they have placed people in charge of “Sharia security” inside public facilities to prepare “Sharia security reports.”

The media activist Tareq Abdel Haq told al-Modon: “Jabhat Fateh al-Sham arrested the owner of the hospital, doctor Najib Kellawi, who had turned his private hospital into a field hospital to serve the city’s people. The arrest occurred by order of one of the group’s members, known as Khalid Sowedani, from Deraa, who had the doctor arrested on charges of improper appearance and his presence in an illegal situation with two nurses from the hospital staff in his office. However, the real reason behind the arrest appears to be that the manager of the hospital refused to employ Sowedani’s wife, which led to a Jabhat Fateh al-Sham fighter and his wife to enter the hospital and threaten the staff, at which point Sowedani appointed himself manager of the hospital and his wife head of the nurses while the owner of the hospital remained in detention for two weeks before he was released.”

Abdel Haq asked: “Is expelling the manager of a hospital and questioning the honor of his staff without a shred of evidence and solely based on the report of one of their fighters a lawful act? How is allowing the group to shed the blood of other group members and then defending the corrupt ones among themselves a legitimate act?”

Liwa al-Aqsa killed more than 140 Free Syrian Army members from the people of the southern Idleb area and the northern Hama countryside at the start of February in the “Al-Khazanat base massacre.” Liwa al-Aqsa took control of the camp from the FSA, which had lost hundreds of fighters in the process of liberating it. The brigade burned tanks and heavy machinery seized from the FSA member who had acquired them before the “brothers in the right path” in the Hayat Tahrir al-Sham opened the way to facilitate their exit to areas under ISIS control in the southern Aleppo countryside and from there to Raqqa.