The Islamic State's members, imams and Shariah judges are taking their wrath out on Raqqa residents as the militant group suffers heavy losses from all sides and awaits its imminent defeat 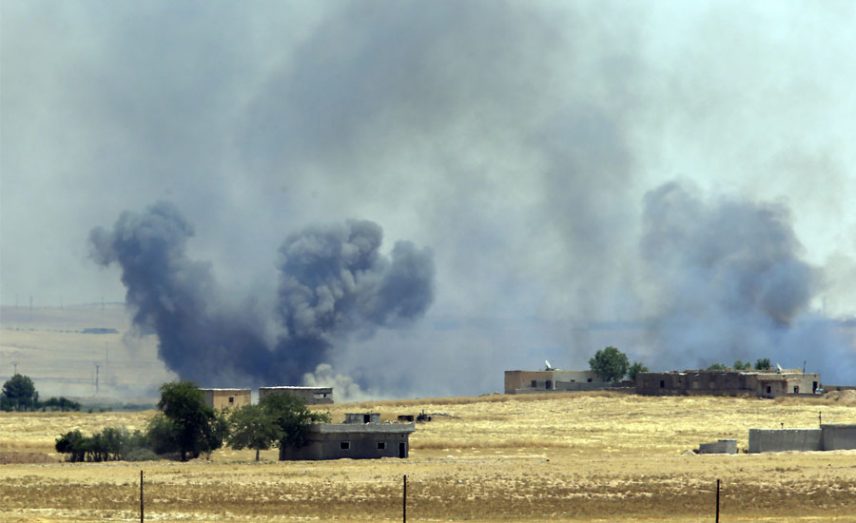 Sheikh Ali, the Egyptian imam of Al-Nour Mosque in Al-Dar’iya neighborhood on the outskirts of Raqqa city, said in his Friday sermon that the Americans had used nuclear weapons against Islamic State (ISIS) fighters who had stood steadfast, to their enemies’ surprise, and he called on Raqqa residents to support their state as the people of Mosul had done.

In other mosques, ISIS imams made similar statements which varied in the degree of obscenity. Over the last few weeks it has become familiar to hear Shariah judges and ISIS members inciting people to join the group using similarly indecent expressions.

Shariah judges have recently become provoked by the sight of men from the city wearing the ISIS-imposed dress without pledging loyalty to the group. “Why are you wearing the clothes of the mujahideen? Take them off and put on women’s clothes. You are not men,” they say.

The angry and degrading language that ISIS members use to address the people of Raqqa reflects their feeling that their end is approaching. Although they do not acknowledge this, they are trying to add more victims to their drowning ship.

The losses which ISIS has suffered recently have affected its fighters differently than previous losses, especially with the approach of the Syrian Democratic Forces (SDF) to just about 15 kilometers from the city in the northeast, along with the Free Syrian Army capture of Al-Bab, as well as their successive withdrawals before Syrian President Bashar al-Assad’s forces.

Alongside losses on the ground, the loss of morale has been enormous. Sources have estimated the losses in ISIS ranks in “Waliyat Raqqa” over the last two months to be more than 350, with most of them falling in battles in the northern countryside of the city and the accompanying airstrikes.

Despite this, ISIS members say that they will fight to the death in Raqqa. Day and night they work on building trenches, raising barricades and booby trapping tunnels on the outskirts of the city which have become — along with some of its connected villages — isolated from the east, west and north. From the south, the Euphrates River has become difficult to cross after the destruction of the two bridges connecting it to the city at the start of the month.

Inside Raqqa, new barricades have appeared ready for street battles which the group is preparing for, while ISIS technicians oversee a network of cameras planted throughout the markets.

About 190,000 people remain in the city of Raqqa. In the province, or in the parts remaining under ISIS control, there are fewer than 400,000 people, including displaced people coming from the eastern Aleppo countryside and some of the villages in the countryside of the northern city.

Near the cities and towns and villages, new camps have appeared, such as Al-Tabqa, Al-Mansoura, Hineda, Debsi Faraj and Debsi Afneen, as residents wander along the nearby desert outskirts or on the banks of the Euphrates.

Throughout the day parents go from one district to another in search of “Diwan al-Jund” to ask about the fates of their sons in the ranks of the organization. When they arrive at the new location of the diwan, which was moved in order to avoid the coalition airstrikes, they do not receive any clear answers. Sometimes, when ISIS members are in a bad mood, the families are expelled by force and threatened. Such is also the lot of the parents looking for the “public and tribal relations” office to ask about the fate of their children jailed in ISIS prisons.

In both cases — indeed, in all cases for people residing in Raqqa — there remains a chance that they will be killed immediately by a coalition airstrike or breathe their last breaths under the rubble. They are living in daily terror of attacks on the ground and from the sky.

Increasing the absurdity of this melancholic scene, is the Hisbah, ISIS' police, pursuing women in the streets so they adhere to ISIS dress codes. At a time when people are looking for walls, roofs or a square meter of area safe from deadly shelling and the destruction of the warplanes, the Hisbah is arresting those who do not have a beard and are measuring the length of the fabric from the men’s trousers from heel to toe.

In silence, and with little attention, the people mourn their dead, whether they were killed in bombardment or in the ranks of ISIS on the fronts.