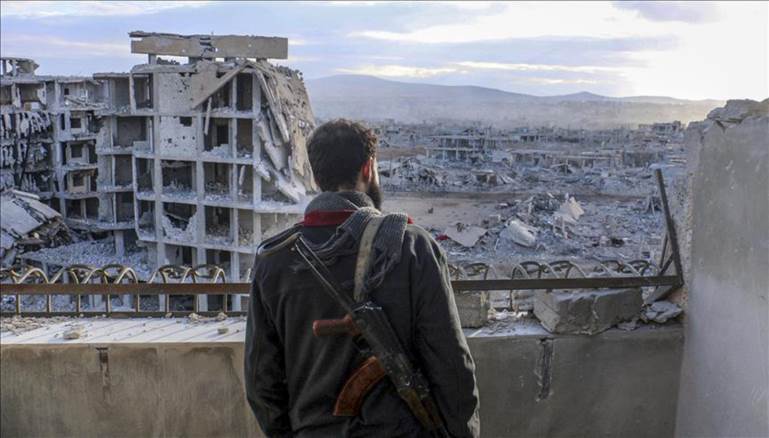 About 400 green buses have transported 14,270 people from the Damascus countryside. The number included some 4,300 fighters who, with light arms, had resisted the regime and its militias for several years.

Daraya’s fighters refused to “settle their status” with the regime’s security agencies, keeping an active front against the regime in northern Syria. In August 2016, 1,700 people left Daraya in 60 buses. Their departure signaled the end of the armed struggle of rebel forces in Daraya, which was known as the “icon of the Syrian revolution.”

The Martyrs of Islam Brigade, the largest rebel group formed in Daraya, began to organize themselves into units immediately after their arrival to Idleb. They trained their fighters to operate heavy anti-tank weapons, something they lacked on their previous fronts in Daraya.

The front in the northern Hama countryside counts as the most important for the displaced fighters from the Damascus countryside, as this would be their last stronghold. The Martyrs of Islam Brigade has waged continuous battles on this front with the aim of liberating Tal Bizamand and the villages of Ma’an, Kawkib and Al-Kabariyah. It has also participated in continuing battles around the city of Aleppo on the “Assad suburb” fronts and its surrounding countryside.

The Ajnad al-Sham Islamic Union group in Daraya, which includes the Al-Meqdad bin Amr Brigade and the Saad bin Abi Waqqas Brigade, continues to operate in northern Syria after its evacuation. The group’s fighters have participated in guard posts on the Kafraya and Foua fronts, before the Meqdad Brigade announced its intention to join the ranks of Ahrar al-Sham.

In October 2016, 28 buses left Qadisiya and Al-Hema in the Damascus countryside, carrying 1,275 people — 650 of whom were fighters from the Martyrs of the Capital Brigade, the Eagles of Damascus Brigade and other groups. The displaced fighters of Qadisiya and Al-Hema sought to join the fronts of the northern Hama countryside, but were stopped in their tracks by a car bomb in one of their camps.

In December 2016, 35 buses left the city of Al-Tal, carrying 2,000 people, including 500 fighters from the Free Syrian Army. The FSA fighters preferred to remain neutral until battles start to open up on the northern fronts. Some of them have joined the Hayat Tahrir al-Sham so as to conduct intensive military courses in preparation for heading toward active fronts. Fighters of Al-Tal had previously belonged to the Al-Tal Martyrs Brigade, the Al-Ghuraba Brigade, the Al-Fatah Brigades and the Al-Moataz Billah Brigades, most of which were dissolved or neutralized.

In November 2016, the largest batch was evacuated from the Damascus countryside, which consisted of 4,000 people from Khan al-Sheikh, Zakiya, and Al-Kiswah and its neighboring areas. This group included 1,100 fighters, who are the most organized after the Daraya fighters. This is due to the fact that most of the rebel groups from these areas are under the authority of forces operating in northern Syria, most importantly Ahrar al-Sham. The groups in Khan al-Sheikh and the environs of its camp include fighters from Drousha, Al-Kiswah, Jdeidat Artouz, Jdeidat al-Fadl, Al-Mezzeh, Kafr Sousa, Daraya, Al-Qadam, Qatna and Al-Deir Kheiba.

Liwa al-Fatiheen works on reinforcement and guard points around the fronts of Kafraya and Foua, and the Ahrar Daraya Brigade is now working under the name Thuwar Suria Front/Abu Dajana Brigades and has split into two factions — one of them working to support Hayat Tahrir al-Sham and the other participating in the Turkmen fronts in the Latakia countryside with the First Coastal Division.

In October 2016, 70 buses left the area of Moadimiyat al-Sham carrying 650 fighters with their families, most of them under the authority of groups from the city of Daraya, including the Marytrs of Islam Brigade and the Ajnad al-Sham Islamic Union. They are currently operating in northern Syria with the Daraya revolutionaries and the Al-Meqdad faction, which announced it had joined the ranks of Ahrar al-Sham. Convoys of displaced people from Moadimiyat al-Sham also carried a number of families and people of Daraya who had previously been displaced from the town to Moadimiya.

In January 2017, 45 buses from Wadi Barada left carrying 2,150 people, including 500 fighters, a number of whom joined Hayat Tahrir al-Sham and Ahrar al-Sham. Other groups who had been working in Wadi Barada, most importantly the Abdal al-Sham Brigade and the Al-Hamza Brigades, have established a new base in northern Syria.