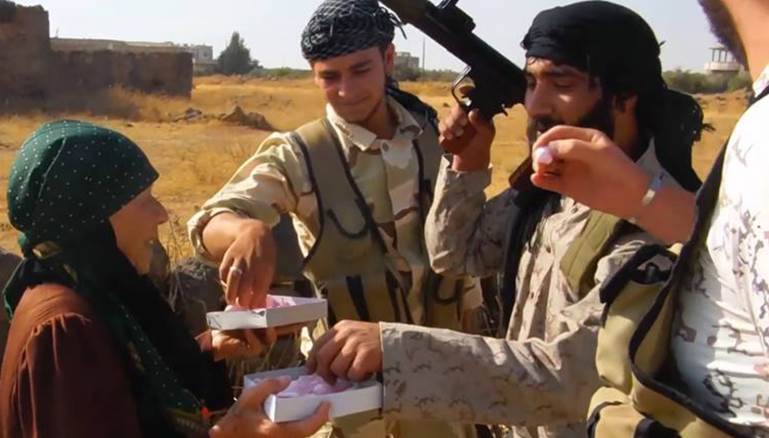 The military tide of armed opposition groups has swelled over the last few days at the expense of the Islamic State (ISIS) in the Syrian desert and in eastern Qalamoun region, extending as far as some of the areas of Lajat in Deraa, such as Housh Hammad. These areas where ISIS deployed its forces but have seen withdrawals following successful opposition operations, in which the biggest Free Syrian Army and Islamist group factions participated.

The Army of Free Tribes rebel coalition announced in a statement on Thursday that it had taken control over the town of Housh Hammad in the Lajat near the Syrian desert and that it had expelled ISIS from the area. It said the organization’s fighters had pulled out toward northern Syria — to the Palmyra and Raqqa environs, specifically, to await the coming battles.

A spokesman in the name of the Omari Brigades, Hamza al-Faraj, told Al-Modon that the “ISIS organization’s losses in the desert and Qalamoun have negatively affected the morale of its fighters and its supply lines” in the Lajat. He stressed that there has been “coordination at a high level between the Omari Brigades and all the factions of the Southern Front who participated in the fighting against ISIS in eastern Qalamoun and the Syrian desert.”

These serious setbacks for ISIS on the fronts extending along the Syrian desert, Deraa and eastern Qalamoun coincide with attacks carried out by groups on other ISIS positions. These desert areas and mountain ranges in eastern Qalamoun are considered one of the most prominent supply lines which connect the Eastern Ghouta with the Lajat and Deraa.

The leader of the Martyr Ahmed al-Abdo forces' operations in the Syrian desert, Alaa Kaheel, told Al-Modon that the ISIS forces had been dispersed after being depleted as a result of the military operations launched by the opposition. He added that the organization had no option except to withdraw toward Palmyra and Raqqa to avoid falling into the encirclement which the opposition had nearly drawn around the area after besieging a number of routes following months of fighting.

According to Kaheel, the military operation began on March 16 “in two simultaneous battles: The first was the ‘Expel the Thugs’ campaign in eastern Qalamoun. During this, the opposition took control of positions in the mountain range. Then we began another battle in the desert under the name ‘We Have Saddled the Horses,' through which we were able to liberate an entire 130-kilometer front to start a second stage of the ‘Expel the Thugs’ battle to fully cleanse the entire area of eastern Qalamoun from the filth of the terrorist group, whereby our forces began to continue into the Homs desert and take control of sites and parts close to Al-Mahsa.”

Kaheel added that the current operations coincided with the second stage of the “We Have Saddled the Horses” campaign, which aims to reach the Damascus and Homs desert areas and the area of eastern Qalamoun entirely, and to break the siege on the eastern Qalamoun region. This “is what we have come close to achieving to a large extent, as the battles are growing larger in the triangular area, that is, the Homs desert, Damascus desert and eastern Qalamoun, to connect them together,” he said.

The opposition forces have relied upon a strategy of fighting for long periods throughout their military operations in Qalamoun and the desert, which has helped drain the resources of ISIS’ militarily and manpower. The opposition forces have launched more than 20 military assaults and have repulsed more than 35 in the last seven months, according to Kaheel, who said that the rebel groups had relied on inflicting human losses in ISIS’ ranks more than trying to control the territory where it is deployed. He said that they had inflicted “more than 650 dead on the ISIS terrorist group while about 500 have fallen wounded — that is, the organization has lost about 30 percent of its forces, which has weakened it.”