Amid heightened discontent among loyalists due to rising soldier deaths and poor social services, the wife of President Bashar al-Assad breaks with regime's usual machismo image to appear in a video promoting the values of motherhood in Aleppo's crippled districts 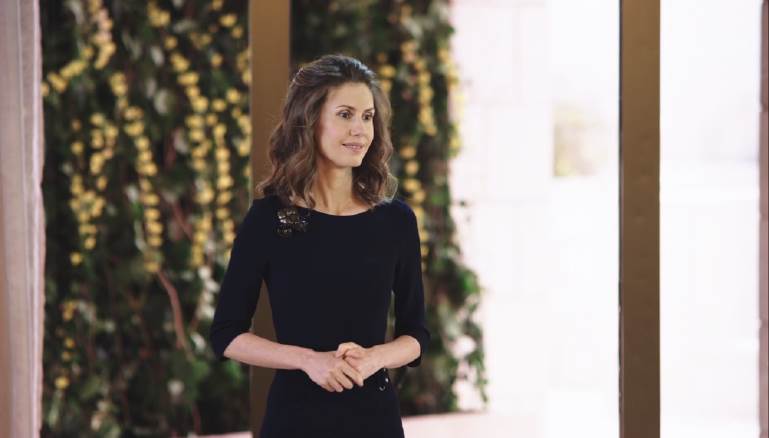 Over the last few months, Syria’s first lady has been playing a new and special role in the propaganda machine of the Assad regime. Asmaa al-Assad has begun to present a brand of rhetoric unfamiliar to Syrians, in a manner that breaks from the masculine and central image of the president as the one, eternal symbol of authority. The new propaganda film, which was presented by the Presidency of the Syrian Republic about the heroism of Asmaa on Mother’s Day, represents an escalation of that role, which she strengthened in parallel on social media, as mother, wife and symbolic personality in local policy.

The title of the film, “Mother of All,” which portrays Asmaa in luxury clothes and stylish shoes among masses of simple women, does not aim to glorify the personality of Asmaa and satisfy her vanity, but rather to shine some gloss and glamor on the propaganda video to accord with its general idea: a celebration by the regime of its victory in Aleppo, which the regime media still sings about months after the end of the fighting there, despite the eruption of violence on new fronts, most recently in the capital Damascus days ago.

From the first minutes of the film until its last, “Mother to All” is the title given to Asmaa by by the loyalist masses, even in the words of the “First Lady” herself and a number of pregnant women who appear, dressed in black, to discuss the deaths of their children “due to the war.”

Here Asmaa offers regime propaganda in relatable, personal speech as part of a policy of “soft power.” She stands in her fixed place among the women sitting around her, who applaud between one phrase and another in the manner of Baath Party conferences. Asmaa dominates the scene with total heroism as the camera focuses upon her, while the women around her are nothing more than frills and “extras” to complete the dramatic and pity-evoking scene, despite assuring her audience that the mothers of Aleppo are the real heroes of the scene and not the victorious soldiers or the regime.

In order for the film to complete the idea of “All,” it pairs two mothers, a Christian and Muslim in a hijab, who lost their sons in Aleppo. Both of them tell their stories before the camera and express happiness mixed with pride after the martyrdom of their sons. Regardless of whether these stories are true or not, and regardless of whether these women are voluntarily appearing before the camera or were forced to, the final result is an exploitation of emotions and the human tragedy in Syria as a whole, specifically the noble emotions of motherhood. No logic distorted by propaganda can claim there is a mother celebrating the death of her son under any circumstance, especially if the reason is duty to the “Mother of All.”

In actuality, the film is nothing more than a bad remake of a propaganda film produced by the Russia 24 channel on Asmaa months ago, highlighting the difference in the level of propaganda production in Damascus and Moscow. The local film lacks intelligence and diversity and tends toward being crude and direct, imitating a failed Syrian soap opera, rather than being a work promoting political figures — however bloodthirsty and dictatorial.

Throughout the film, Asmaa appears far from her casual image in the Russian film, in which her style is simple, without makeup, as she travels between houses of mothers before receiving some of them in the Republican Palace in Damascus. In the Syrian production, she is more formal, delivering a rigid speech like reciting a monolog with difficulty – and without soul or spontaneity – about the role of Aleppo’s women in the regime’s victory against terrorism and against “the neighbor’s troublemaking, thieving, criminal son,” — a reference to Turkey, who supported the revolution against the regime.

It seems that the video was produced before the recent Damascus battle as a kind of obligation, as it was necessary to offer something in commemoration of Mother’s Day, which is appreciated widely by Syrians, especially in light of the growing discontent in the ranks of loyalists about the human toll and a lack of social compensation for families of fallen soldiers. Of course the film does not discuss any of those details, but the mothers of the regime soldiers discuss their joy at the deaths of their sons defending the “Mother of All.”