Communities of displaced families from all over Syria are welcomed to Idleb, where the fusion of life, foods and traditions from all provinces has merged to create a stable microcosm of Syrian life, Sada al-Sham writes 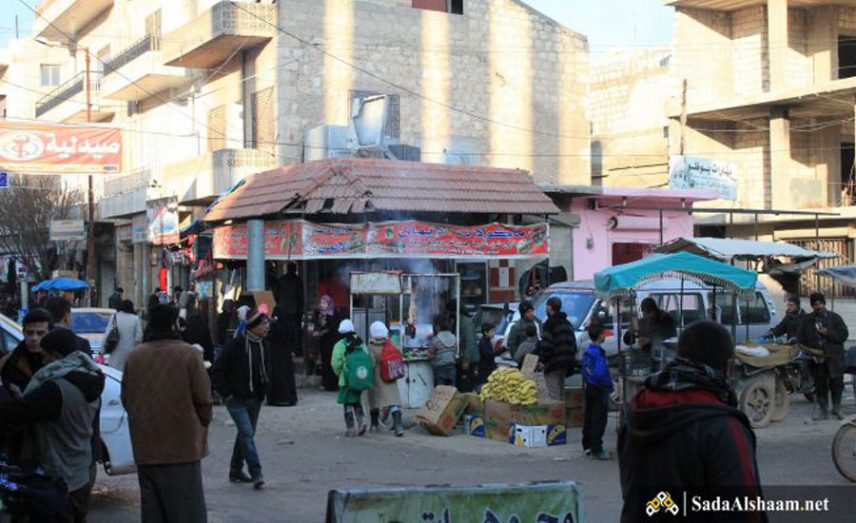 From 1.5 million people living in Idleb province before the revolution in 2011, more than 3 million from various Syrian provinces have come to reside there after it fell totally outside regime control about two years ago.

From that time until today, many changes have affected Idleb, leading activists to give it the name “little Syria,” as here residents originate from different parts of Syria — brought together by diversity and integration at the same time — and all are within a geographical space no larger than 6,097 square kilometers.

After the Assad regime began to carry out operations to displace the people of rebellious areas through settlements and “reconciliations,” a large number of displaced people arrived in Idleb, whether from the Damascus countryside, the Al-Waer district of Homs or the eastern districts of Aleppo, while others have also fled there from the Hama, Aleppo and Lattakia countrysides, and even from Daraa, Raqqa and elsewhere.

With their arrival, the people of these areas have carried with them their customs, expertise and local cultures which have brought a new character to Idleb, whose features are hidden to no one.

Umm Mohamed, one of the “original” residents of Idleb, said that since the arrivals she had learned of a great number of cuisines she had not prepared before, while the displaced people have also affected her views on dress and general thinking. On the level of social relations, marriages between residents of various cities have become prominent inside Idleb province, and it is no longer strange for a woman from Idleb to marry a young man from another area and to live according to his customs and traditions in marriage.

And it does not stop here, as people from the eastern districts of Aleppo have brought to Idleb what might be considered administrative thinking, from their experience in areas outside regime control. They have reopened a number of civil organizations and educational institutions, especially thanks to the availability of educational know-how among residents of Idleb, which has helped them to improve their work.

In terms of work, strange new professions have spread widely, and Idleb province has begun to live through a stage of economic flourishing compared with the time of Assad regime control.

Abou Marouf, who came from Homs, became the owner of a store here specializing in selling halawet al-jibn (a special desert) in Idleb city. He says that rather than changing his profession, he found that people were keen to buy from a trader who comes from city famous for his specialty.

There are also people from Hama who bring a special flavor to life in Idleb through their selling of sweets which are unknown among the locals. Sellers from the central region are famous for al-shaubeit, and people now seek out the Avocado Hamawi shop in the town center to have a large cup of it. Residents now can’t get enough of the taste, according to Tazin, a young man from the Idleb countryside.

We cannot forget the people of Syria’s commercial capital, Aleppo, who did not surrender to their situation after being displaced, but rather returned to their lives and the splendors that they love. Known for their brilliance in trade and economy, Aleppines cherish their ability to set up their activities on any spot of land in which they find themselves. Just as they enlivened the Lattakia market before, they are now active in Idleb province in all fields and with the help of various groups.

The Syrian accents, in all their varieties, have long been the clearest identifier for people of every area, and with the arrival of a large number of displaced to Idleb, a mixing and multiplication of “tongues” has emerged. There have emerged within Idleb sounds parallel to the original accent, with some people mastering more than one to serve them in their daily lives in the midst of diverse backgrounds and appearances.

“Lara,” a child from the city of Homs who is a student in one of the first grade schools, said: “Every day I learn words from my friends from Idleb and Aleppo and elsewhere. Even in my house my family sometimes speak the Idleb dialect and my friends do that with their families too.”

The Assad regime tried to plant feelings of despair and frustration among the families forcibly displaced from the Damascus countryside in an attempt to humiliate them by alienating them from their homes and cities.

However, Hossam, who was displaced with his family and his wife from Qadissiya to Idleb, had his own view on these attempts, saying: “We consider every inch of Syria our land and our home. We have not felt at all strange in Idleb. Actually we are grateful to them, as they are good people in their morals and the way they treat us. We love their city because it resembles us in every way. This the opinion of me and of hundreds of others who have come from the Damascus countryside.”

Despite the few quarrels between residents in Idleb that have emerged being only minor, their extent has been exaggerated by some activists and media which sensationalize issues, presenting small flare-ups as if they impact upon social relations among all the people of Syria’s provinces.

The fact remains that the people of Idleb, who have welcomed the displaced, are still ready to receive those coming from all areas of Syria – a fact reflected in any survey of opinions or any journey in the province.