Residents voice relief at proposals to lift the heavy security presence on city roads, while others fear spontaneous checkpoints which aim to arrest those escaping military service, Enab Baladi writes 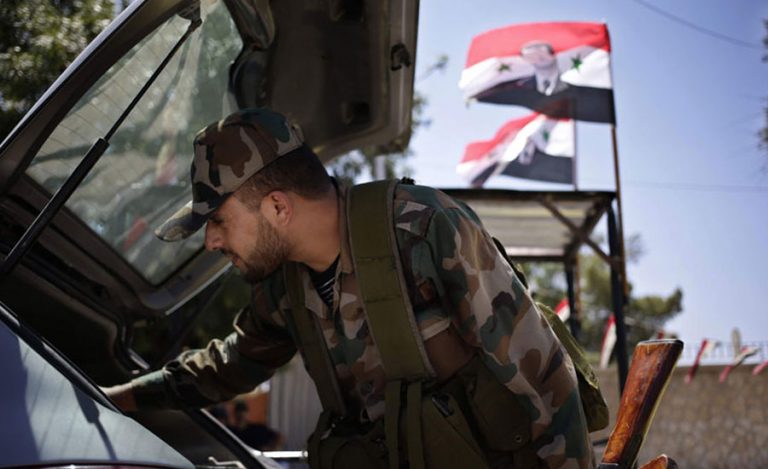 As parts of the country appear to exhibit a “return of security” and the achievement of “greater relief” for citizens, authorities have moved to implement a regime plan to remove “unnecessary” checkpoints from the streets of the capital Damascus and other Syrian provinces.

Optimism in the streets… awaiting promises

Despite the plan being in its early stages, the signs of optimism were apparent in the Syrian street. The new proposal has given citizens hope that their freedom of movement will return and they will see an end to the traffic which has caused roadblocks and inspection points. Locals based their optimism on the words of the Damascus countryside governor, Alaa Munir Ibrahim, in his statement stop the Al-Watan newspaper on Thursday, June 29.

Ibrahim said that the plan to remove a number of checkpoints and cement blocks aimed to open up the streets to “achieve relief” for citizens, especially in areas of the Damascus countryside to which security has returned, as he put it, pointing out that the government will remain only at the “necessary” checkpoints around the capital and at those which “achieve security.”

For his part, Safaa (a false name), a resident of the Zahara district of Damascus, expressed her optimism at the new plan to remove the checkpoints from the streets, saying it was an important step toward relieving what she called the “hardship” of moving from one area to another. She added: “We hope that this can be believed. People are fed up of suffocating.”

Safaa told Enab Baladi that since the security checkpoints were first constructed people have dodged unnecessary journeys between parts of the capital to avoid spending half their time at checkpoints, adding that most of them prefer to carry out their errands on foot or motorbike to avoid the long car lines waiting at the inspection points.

Safaa recalled a story which occurred to her when she was late to the wedding of a relative, saying: “I was forced to get out of the taxi at the checkpoint traffic and go by foot to after the checkpoint, and then ride another taxi, and get out at every checkpoint. That’s how I arrived.”

The number of soldiers at each checkpoint ranges between five to 30, most of them in full field gear, and they stand inside a barrier made of sandbags. Soldiers inspect the trunks of cars coming and going, in addition to checking identification, which has caused the car lines to increase exponentially.

Has the Syrian regime secured the capital?

Syrian regime supporters' fears have risen around its ability to secure the capital from those they describe as “militants” in the event that the security checkpoints are removed from the Damascus streets.

The governor of the Damascus countryside said that the Interior Ministry was coordinating with the concerned security agencies to implement the plan to remove the checkpoints precisely in order to “avoid any breaches,” noting that in a security council meeting a study was made of the respective areas and the extent of the need to reduce the checkpoints in them.

The removal of the checkpoints reflects developments on the ground witnessed over the last year, whereby President Bashar al-Assad’s forces have secured, with Russian air cover, a belt around the capital, through recovering areas previously controlled by the opposition in the Damascus countryside, whether militarily or through what is known as “displacement settlements.”

The regime operations to secure the capital began with emptying the city of Daraya of its residents after a committee representing the rebel groups and Daraya city notables reached an agreement with the regime to clear the city on Aug. 26, 2016, leading to the departure of all fighters to northern Syria.

The regime has pursued the same policy in Barzeh, Qaboun, Madaya, Wadi Barada, Zabadani, Khan al-Sheikh, Qudsaya and other locations in the Damascus countryside, amid rumors that the securing of the capital is “nearly complete”. The Eastern Ghouta and the Jobar district are still in rebel hands, while the Yarmouk Palestinian refugee camp in the capital’s south is under the control of the Islamic State (ISIS).

The “flying” checkpoints spark more fear than the “fixed” ones

While some were optimistic about the removal of the barriers from the streets of the capital Damascus, Abou Mazen, a resident of the Rukneddine district, believed that the plan would be hard to achieve at the current moment, saying that the removal of checkpoints was currently “intangible” for citizens, since removing one checkpoint alone was not enough. He expressed that by saying it was only the “tip of the iceberg,” in an indication that however many checkpoints are removed, the number of those constructed will still be larger.

His only son had another view. He spoke about his friends' “fear” about the spread of “flying” (temporary) checkpoints after removing the fixed ones.

Some Syrians consider the regime plan to remove the checkpoints to be a calculated move with other purposes, such as encouraging oung men who are wanted for military service to have freedom of movement in the streets, and then arresting them at temporary checkpoints.

Mazen, 28, an employee at an engineering company, said that talk about this idea had spread among people and confused the young men who were wanted for reserve service. “The fixed checkpoint can be avoided easily by those who are wanted, but the flying checkpoints are unexpected and can appear at any time and place suddenly.”

The Syrian regime's plan is not limited to removing the checkpoints from the capital only, but also includes Tartous, Lattakia, Homs and Hama. At least three checkpoints have been removed in Hama, two in the Assi Square area in the center of the city, and the third at the Al-Muhandiseen roundabout in the Shreea district.

Similar checkpoints have been removed in the city of Tartous, according to what local loyalist Facebook pages have reported on June 28.

The first military checkpoint deployed in Syria was in Douma city in the Eastern Ghouta on April 24, 2011, when security forces decided to cut off the main road leading to the city in the Damascus countryside after popular protests against the regime and the beginning of the revolution in March of that year.