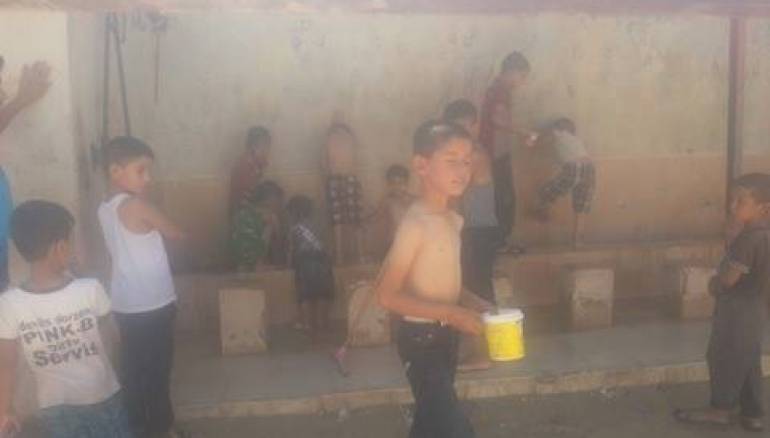 Some 40,000 Syrian refugees are suffering from blackouts during the peak hours of heat in the Sulaiman Shah camp in the town of Akçakale, south of the Sanliurfa province. The power cuts combined with the scorching heat forces most of them out of their tents during this time of the day.

Refugees said they are covering their bodies with water to relieve the heat after power cuts from 1-4:30 p.m. began in recent weeks. On Monday, the times of the electrical rationing were changed to 8-11 a.m.

Speaking to Zaman al-Wasl, Hajj Mahmoud, a camp resident, explained that children have taken to gathering in the Al-Hamamat (Baths) area due to the electrical power. The area includes dozens of public baths where the children swim and try to escape the intensity of heat. With the start of July, temperatures in the area have risen to over 40 degrees Celsius.

Hajj Mahmoud said that between 40,000-42,000 Syrian refugees live in about 6,000 tents under these circumstances. According to his calculations the highest percentage of residents in the camp are from Deir-ez-Zor and Raqqa provinces, followed by people from Idleb and Aleppo provinces.

He pointed out that Sulaiman Shah is the only camp whose administration imposes electrical power rationing on its inhabitants. He added that residents also face a difference in the price of food, as most of the food entering the camp is about 25 percent more expensive than elswewhere.

Camp residents also explained that the medical care in the camp clinic is not the best. They said patients receive prescription drugs a day or even two days after going for a check-up, although at a minimum patients need something to relieve their pain while they wait for the necessary medication.

The Sulaiman Shah camp is located in the Turkish city of Akçakale in the Sanliurfa province. The camp includes 10 districts each with four color-coded sections. At the beginning of the camp is the camp administration and gendarmerie section, and in the middle of the camp is a school and a mall for residents to buy foodstuffs and other necessities.