After the recent capitulation of Turkish-backed Ahrar al-Sham to HTS in rebel-held Idelb, uncertainty remains around further infighting and the possibility of an Ankara intervention, Enab Baladi writes 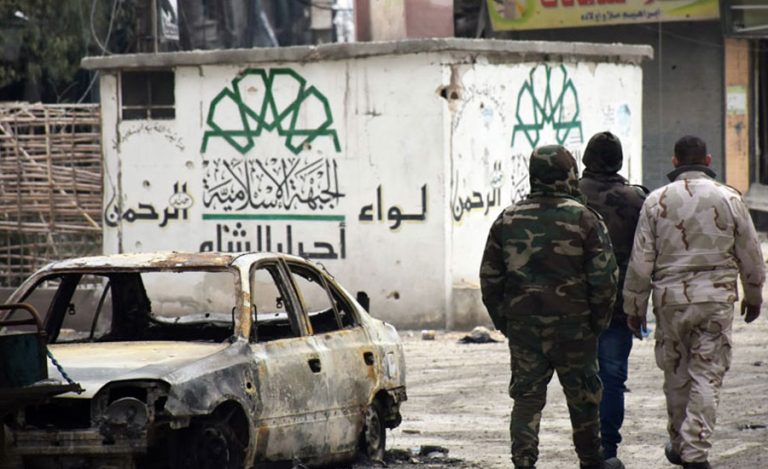 Idleb province entered a new phase after the fighting between its two main factions ended with the Nusra Front-dominated Hay’at Tahrir al-Sham (HTS) imposing its conditions on rival group Ahrar al-Sham, which emerged as a fragile political and military entity.

The agreement, which included a cease-fire and Ahrar’s withdrawal from the Bab al-Hawa border crossing, which is to be handed over to a “civil administration,” and the release of its prisoners, showed that the fighting was largely for control of Bab al-Hawa, which has seen the most violent military confrontations, in order for HTS to incorporate it militarily and administratively.

The clashes lasted three days, July 19-21, with the two sides trading control over a number of areas on the first day, and the military current changing on the second and third day in favor of HTS. There is no precise information about the number killed on both sides.

After the agreement, the official spokesman for Ahrar al-Sham, Mohamed Abou Zaid, said: “Sons of Ahrar al-Sham and its guardians, be certain that the movement will not halt the march for which it emerged and will continue with the help of God.”

He added: “Your structure is steadfast and has not and will not be destroyed, with the permission of God. You are the project, you are the hope. Let each of you be a movement onto yourselves, and roll up your sleeves, for we await greater challenges and higher aims.”

However a number of groups in the Ahrar al-Sham coalition announced after the fighting that they were splitting from the alliance or remaining neutral, as occurred in the village of Al-Rami in the Idleb countryside. Some have attributed this to the absence of a clear charter for the faction, alongside the hesitation and confusion in making decisions, which have shifted over the last few months, most recently with adopting the Syrian revolution flag and the unified Arab law.

In the context of the military confrontations, the outlines of an internal HTS split appeared regarding probable Turkish intervention and fighting against Ahrar al-Sham.

The Saudi preacher Abdullah al-Muhaysini, a member of the Shariah authority in HTS, said that he had not issued a fatwa permitting the fight against Ahrar al-Sham and involvement was banned for Muslim youths, at a time when the province was seeing widespread fighting in its most vital areas.

However HTS media official Imad Eddin Mujahid responded, saying: “The authority has its official pages which publish the positions of its leaders and its shura council, and that which is published on personal pages does not represent anything but the opinion of its owners and their orientation.”

According to information obtained by Enab Baladi, HTS is undergoing a division based on the probability of Turkish intervention in Idleb between one current which wants to end international isolation and another that wants to fight Turkey and the groups it backs, such as Ahrar al-Sham and the Free Syrian Army.

Meanwhile the general military commander, Abou Mohamed al-Jolani, the Sharia judge Abou Abdullah al-Shami and the leader of the Hama sector, Abou Youssef Halfaya, are sticking to their positions on the Turkish intervention and the other factions in the provinces, alongside the three Egyptian Sharia judges, Abou Fatah al-Farghali, Abou al-Yaqzan al-Masri and Abou Shaeeb al-Masri.

Throughout the three days of fighting, there was a complete absence of Turkish statements, limited to the factions Ankara supports known as the “Euphrates Shield,” as reports circulated about its intention to intervene alongside Ahrar al-Sham without any actual movement on the ground.

Free Syrian Army sources said that the fighters it transferred to Idleb city from areas of the Idleb countryside did not exceed 200, mostly from Ahrar al-Sham.

The sources said: “If the fighters went in, they wouldn’t be able to achieve anything at the expense of Tahrir al-Sham without air support from warplanes and artillery, given the area where the fighting has occurred, which is a major center for Tahrir al-Sham and they know the topography well.”

Ankara has included the Nusra Front, which changed its name prior to forming the alliance, on a terror list at a time when HTS has rejected any Turkish intervention and threatened to fight them.

A legal advisor to the Free Syrian Army, Osama Abou Zaid, told Enab Baladi that “the collapse of Ahrar al-Sham and the arrival of Tahrir al-Sham to Bab al-Hawa will lead to the crossing being shut down because of Turkey’s classification of Nusra [as terrorist].”

Abou Zaid said that the crossing was a primary artery to supply the opposition and bring in humanitarian aid, and therefore HTS taking control of the area from the Atmeh crossing to the Bab al-Hawa crossing and to Babsaqa will put Turkey in a difficult position and push it to find solutions.

He said that if HTS reached the crossing, this would be considered a factor accelerating Turkish intervention. Enab Baladi tried to obtain the items of the agreement between HTS and Ahrar regarding Bab al-Hawa, but HTS did not give details and only would assure that it would deliver it to an independent “civilian administration.”

Idleb province is awaiting the developments of the coming days amid fear that it will be turned into a new arena for the “fight against terrorism” under the pretext of eliminating the Nusra Front, alongside questions about Ahrar’s surprise position on the agreement, which was considered a “surrender” and bowing to the demands of HTS.

A media relations official in Ahrar al-Sham’s political wing, Omran Mohamed, said in a post on Facebook that “the campaign of arrests of Ahrar in areas under Nusra control reminds me of nothing but the last days of the groups of Iraq, before Iraq grew dark and ready to hand over to the Rawifid.” (Rawifid is a derogatory term for Shiites)

Activists blamed the two factions for the possibility of international intervention in the province, which is included in the de-escalation plan according to the Astana agreement, under Turkish-Russian-Iranian sponsorship.

The anger has been reflected in popular protests in a number of areas such as Saraqib and Maarat al-Numan, which emerged in the first days of the fighting.