Ibrahim Hamidi explains the decision by Kurdish figures to divide northern Syria into three regions, including Raqqa after its liberation from ISIS 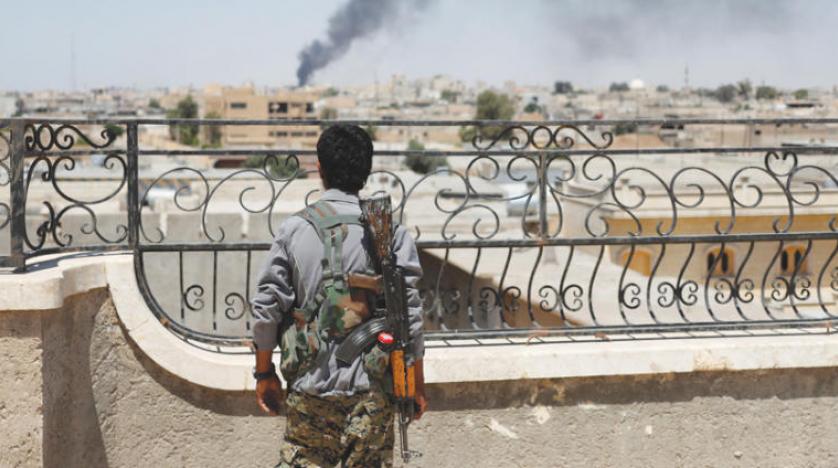 The “democratic federalist election law for northern Syria” and the “administrative divisions law” which were approved in a broad meeting in Ramalan in northeastern Syria days ago showed the expansion of the Self Administration to three regions with six cantons, including Arab majority areas such as Tel Rifat and Al-Shuhada in the Aleppo countryside and Al-Shadadeh in the Hassakeh countryside, from which the Kurdish-Arab Syrian Democratic Forces have expelled Islamic State (ISIS) with American support.

The two laws, obtained by Al-Sharq al-Awsat, also specify a program for the elections, with Sept. 22 set as the date for commune elections in the federalist system, and Nov. 3 to run local administration elections (councils for villages, towns, districts and cantons). Jan. 19, 2018, is set for regional elections and the democratic peoples’ conference in northern Syria. Notably, it asserts the rights of Kurds deprived of citizenship by Damascus to run and vote.

The co-president of the Executive Authority of the Democratic Federation of Northern Syria, Fawza Youssef, told Al-Sharq al-Awsat that Raqqa, which the Syrian Democratic Forces are working to liberate from ISIS, will be administered by a local civilian council and that members will decide if it will be included in the Syrian Federation or not, noting that the matter of Deir-ez-Zor is “still early” because there is a military operation to liberate it.

For his part, a commander in the Kurdish Democratic Union Party told Al-Sharq al-Awsat that the conference held in Ramalan — which involved representatives of federalist units — had decided to adopt the principle of “democracy from the bottom up, from small units to the highest, with the hope that this model will be adopted in all Syria.” He noted the need to search for a formula to strengthen the performance of the unified executive council for the three regions which the federation includes.

The text of the law which was approved in the Ramalan conference includes 40 articles which specify the mechanisms of the election in the Democratic Federation of Northern Syria beginning with the formation of a “high authority for elections” with the voter defined as “every Syrian citizen bound by the areas of the Democratic Federation of Northern Syria and those with a similar status, such as those stripped of citizenship, who fulfill the legal and civil conditions to vote in the elections.”

The issue of stateless Syrian-born Kurds was among the reasons for the reservations of the Syrian Kurds regarding the Assad regime, because of a 1960s census which stripped them of citizenship and documents. The law says that “every citizen and those of a similar status bound by the areas of the Democratic Federation in Northern Syria whose nomination has been officially accepted by the commission” has the right to run in the elections and that “one or more political entities have the right to stand for the elections in one list and the voting shall be completed as it is without amendment or alteration.”

It is expected that the “election of members of the councils of the Democratic Federation of Northern Syria will be completed by direct, secret ballot by the people once every two years. The peoples’ councils in the regions and the democratic peoples’ conference will be once every four years,” according to the text. It adds: “The members of the councils in the Democratic Federation of Northern Syria shall be elected as follows: 60 percent from among the representatives of the people determined by general elections in which all people participate, and 40 percent from among representatives elected according to the principle of consensual democracy from the ethnic, religious, doctrinal, cultural, and social communities in accordance with the demographic density of each region.”

The “administrative divisions law” stipulates formations of regions and cantons “in accordance with the principle of consensual democracy and strengthening the system of democratic self-administration.”

Under the title “administrative divisions for every region” the law stipulates that “the Democratic Federation of Northern Syria” is composed of “three regions, which are: the Jazira region, Euphrates region and Afrin region,” noting that the previous text for the self-administrations which was established years ago was based on three regions — Jazira, Ayn al-Arab (Kobani) and Afrin.

The current law stipulates that the “Jazira region shall be composed of two cantons, Hassakeh canton and Qamishli canton” as it specifies that “the Hassakeh area includes the center of Hassakeh city and the towns, villages and farmlands under the center, in addition to the Shadadeh district, Arisha district, and Al-Houl district,” which are Arab areas from which the SDF expelled ISIS.

With regards to the Euphrates region, it shall be composed of the Kobani canton, which includes two areas — the city and Sirin — and the Tel Abyad canton which includes “the town, villages and farmlands under it in addition to the districts of Ayn Eissa and Salouk,” noting that Ayn Eissa is a major center of displaced people from Raqqa and for the Raqqa civilian council, which is expected to govern it after ISIS is expelled.

Because of its concern about the establishment of a Kurdish entity in northern Syria, Ankara has been supporting factions of the Free Syrian Army and launched the Euphrates Shield operation to take control of areas in the Aleppo countryside to prevent a connection between the Kurdish regions east of the Euphrates River (Hassakeh and Kobani) and the Afrin region west of the river. The Turkish army has tried to launch a new operation to support the Free Syrian Army to advance toward Tel Rifat near Afrin.