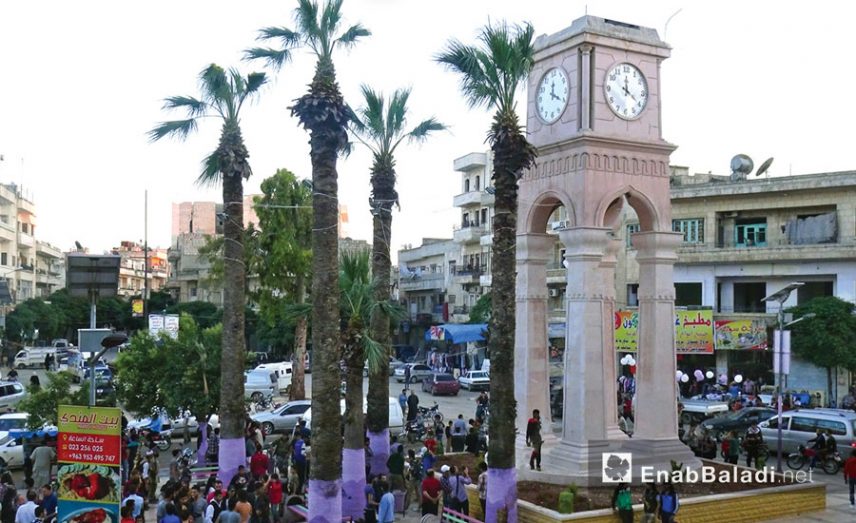 Hay’at Tahrir al-Sham's (HTS) control of Idleb has opened up scenarios for international intervention in the northern rebel-held province, given that the group is on the "terrorist" lists for countries that play an influential role in the Syrian issue.

In parallel with the steps which are being taken on the ground, the great regional countries are reviewing their plans. While the United States and its counterpart Russia try to carry out military action to end the group's influence in the province, the Turkish government is trying to neutralize it through a proposal it put forward on Aug. 22, which includes three items which had been studied with the opposition and armed factions.

The Yeni Safak newspaper, which is close to decision-making circles in Ankara, reported that the Turkish proposal is based on three main points, which are the formation of a local civilian administration authority to manage the city’s humanitarian and everyday affairs, neutralizing armed groups from its administration and "turning Syrian opposition fighters into an official police agency tasked with maintaining security, and the full dissolution of the Hay’at Tahrir al-Sham."

The newspaper said that, "Turkish official agencies are currently communicating with the Syrian opposition and groups active in the city in order to reach a solution which eliminates reasons for a military operation in the province."

The probable operation would be led by the United States, Russia, Britain and France, and preparations are underway, under the pretext of "fighting terrorism, manifested in the remnants of the Al-Qaeda organization and Nusra Front fighters currently incorporated under the name of Hay’at Tahrir al-Sham," according to the newspaper.

It said that "Turkey is afraid that this operation could lead to empowering the Syrian regime by putting an end to the biggest stronghold of the Syrian armed opposition, in addition to fears of a humanitarian disaster occurring on its border."

Turkey's Syrian policy has been floundering for months amid a "tornado" in northern Syria, according to the Turkish writer and researcher Samir Salaha, who said that "Turkey's problem is not just with the rivalry of the groups [the Democratic Union Party, HTS] for control over the regions south of its border, but being subjected to constant accusations, sometimes directed by allies, tying it to some of these groups.”

He said in an article in the London-based Al-Araby al-Jadeed newspaper that "Ankara insists there is a plan targeting its direct national security through the establishment of a Kurdish entity in northern Syria that combines the Iraqi border areas and the northwestern frontier in Syria, and includes the opening of a Kurdish window overlooking the Mediterranean Sea."

“It also considers that Washington has succeeded in disrupting the latest understandings of the Astana tripartite meeting, which called for the establishment of a de-escalation zone in Idleb, opening the way for the construction of a new local force there under the supervision of Nusra Front and its local allies, and raising slogans of the need to eliminate this terrorist organization before proposing any security plan in the city."

The American position on the current situation in Idleb province is no less important than the Turkish position. Considering the minute developments which the Syrian situation has witnessed, we see a contradiction between these two positions, the first outlines of which appeared with Ankara’s statements stating the failure of U.S. plans in the province.

Enab Baladi translated sections of the report published by the Yeni Safak newspaper on Aug. 27 in which the United States used HTS as an excuse to "occupy" Idleb, given that it is an "arm of the Al-Qaeda organization."

The report pointed out that parts of Idleb on the Turkish border would be handed over to the Free Syrian Army, noting that "work has begun to form a local council and to administer the city in all parts of the province."

Yeni Safak likened the U.S. pretexts in Idleb to "the pretext of democracy as it pursued in its occupation of Afghanistan and Iraq," while "giving the PKK legitimacy in Syria," referring to the Kurdistan Workers’ Party which is outlawed in Turkey.

A commander in the Free Syrian Army, Mustafa, said that "America aims to mobilize the Syrian Democratic Forces from the eastern region, in preparation for its subsequent control of all border areas."

He said that "the Americans' plan A is to support the SDF in entering Idleb, and this is rejected by Turkey, who considers [the plan] a threat to its national security and is contrary to the Russian project and its ambitions. It is possible Russia will accept the American project in the event that it does not reach any understanding with Turkey around Idleb."

According to the commander's viewpoint, "the success of the Americans' plan A depends on the rebel groups from Idleb rejecting the program for support and armament similar to the Pentagon's program after five months, because if they agreed it would cut off the path for the SDF."

In the event that the Americans cannot implement plan A, they will move to plan B, as they have two options: Either support an Arab Sunni formation or make a bigger pact with the Russians.

As the third main and active international party in the Syrian issue, Russia is trying to establish "de-escalation" zones throughout the country, but has encountered difficulties, according to the Russian Foreign Minister Sergey Lavrov.

Lavrov said during a meeting with his American counterpart, Rex Tillerson, in the Filipino capital Manila at the start of August that "work to establish de-escalation zones in Idleb will not be easy."

Observers believe that there are severe difficulties in defining the de-escalation areas in light of HTS controlling most parts of the province.

Moscow announced that it is negotiating with the opposition in six provinces for inclusion into the cease-fire, in Aleppo, Idleb, Damascus, Hama, Homs and Quneitra.

Russia has previously overseen a cease-fire in southern Syria with participation from the United States, while it announced agreements in the Eastern Ghouta and the northern Homs countryside in July and August. But the Kremlin considers HTS to be a terrorist organization, and has excluded them from previous de-escalation zones.

The Russian Foreign Minister said that "communications with the Americans around the crisis in Syria are ongoing and we hope to follow up on them."