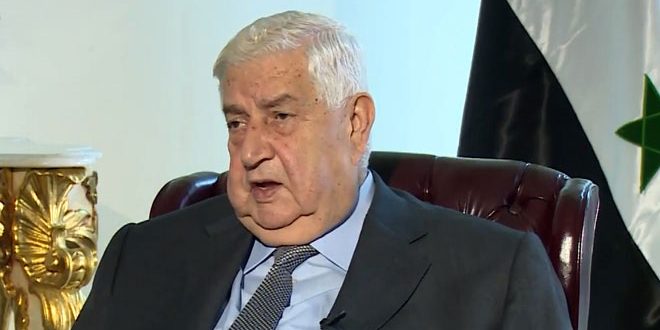 Foreign Minister Walid al-Muallem rejected the Kurdish vote for independence in neighboring Iraq on Monday, saying that efforts to establish a self-administration system for Kurds in Syria was an issue subject to negotiation.

Speaking in an interview with RT, Muallem said: “In Syria, they [Kurds] want to proclaim autonomy in one form or another within the borders of the Syrian Arab Republic. Negotiations and a dialogue are possible on the matter.”

Regarding the referendum in the Iraqi Kurdistan region, Muallem said Syria rejected the issue categorically, saying that Damascus stands for the unity of Iraq. The foreign minister said on Saturday that Syria recognized a united Iraq and stood against attempts to divide it.

Muallem’s position was repeated by Deputy Foreign Minister Ayman Susan, who said on Monday that the referendum for the secession of the Kurdistan region in northern Iraq was “null and void.”

Regarding the American military in Syria, Muallem renewed his rejection of the "illegal" U.S. presence on Syrian territory, adding: “We will knock on every door, and when diplomacy fails, we will look for other solutions.”

Muallem said on Saturday that any presence of foreign forces on Syrian territory without the approval of the government was considered a flagrant occupation and a clear violation of international laws.

Addressing Syrian-Turkish relations, the foreign minister said that the first step which Turkey needs to take in this respect lies in “stopping its support and funding for terrorist groups, and after that we will consider any Turkish offer to improve relations.”

The Syrian government has repeatedly accused Turkey of supporting and arming Syrian opposition groups, calling for international condemnation of the military operation backed by Turkey in northern Syria.

“We agreed on a de-escalation zone in Idleb and we consider this a test of Turkish intentions,” he said.

In the context of the repeated attacks on Syria by Israel, Muallem said that Syria would respond to Israeli raids if they continue, but that the current priority is fighting the Islamic State (ISIS) and Nusra Front organizations.

Since the conflict in Syria erupted in 2011, Israel has bombed Syrian or Hezbollah targets inside the country several times, most recently striking a military position near the Damascus International Airport overnight Thursday.

Muallem also addressed during his interview the issue of Syria’s relations with the European Union, saying: “Security cooperation with European countries requires halting direct or indirect support for terrorists, and lifting the unilateral economic sanctions” against Syria.

Regarding the situation on the ground in Syria, Muallem said that the main battles were “nearly over,” adding: “We are writing a new chapter of the crisis.”

In another interview with the Al-Mayadeen TV channel, the diplomat said that he had felt “a shift in the positions of countries known to support terrorist organizations,” while describing the future role of the EU as “inconspicuous.”

He addressed the issue of reconstruction in Syria, saying: “If Europeans want to participate in reconstruction, they must lift sanctions from Syria.”

Muallem rejected the participation in reconstruction of any entity that had killed the Syrian people. “Syrians and their partners and the countries which did not conspire against Syria will contribute to building it,” he said. The Friends of Syria group this month made the political process a condition for any future international participation in Syria's reconstruction.

Earlier this month, Syrian authorities said they welcomed initiatives from countries and entities which were not involved in the aggression against it, and which took a clear and explicit position against terrorism, to participate in reconstruction efforts.

Muallem attacked the United States, accusing American warplanes of “killing thousands of civilians in the Raqqa and the Deir-ez-Zor countryside under the pretext of bombing ISIS,” adding that Washington “did not have an interest in eliminating terrorism.”

He noted that “United States bases in Syria are temporary and the proof is what happened in the Al-Tanf base.”

Muallem added that Syria was in possession of information that “ISIS fighters were evacuated in American helicopters,” saying the United States was likely retaining “ISIS fighters to use them in other areas.”

Regarding the return of Syrian refugees to their country, the foreign minister said that the “safety of citizens who want to return was guaranteed but we cannot force anyone to return.”

This came after the publishing of a video recording on the internet of comments which were made by a prominent Syrian military officer which included a threat to Syrian refugees abroad that they would face punishment if they thought of returning to their country.

The events in Syria have resulted in the displacement of millions of people inside Syria and abroad, fleeing the consequences of the fighting in terms of the suffering of bombardment and the battles which have overrun Syrian cities.