Activist says runoff from fertilizer and other toxic substances are likely contributors to strange taste and cloudiness of water, Sada al-Sham writes 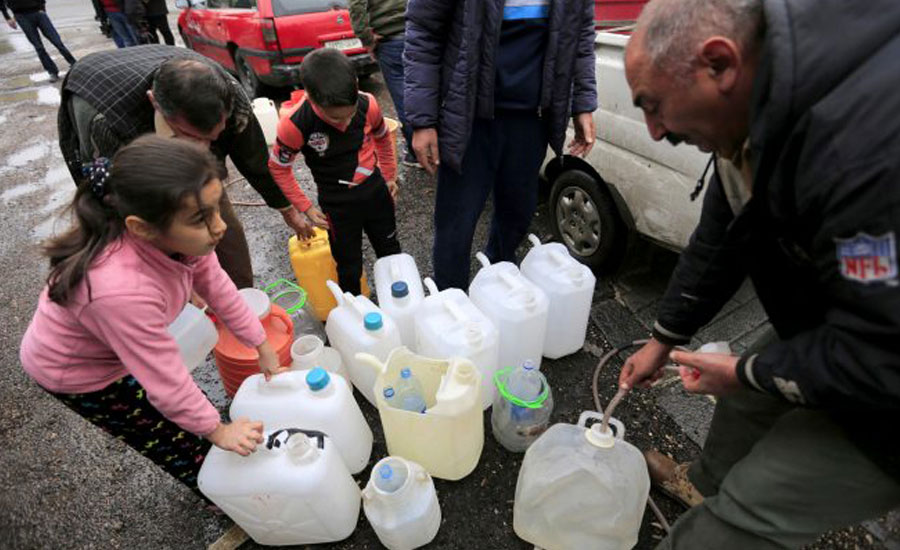 It wasn’t too long ago that residents of Damascus and its visitors were supplied with sweet drinking water from the Ain al-Fijeh and Barada springs in the capital’s countryside. But this sweetness is now absent from most areas of Damascus, with a population of 5.5 million, as complaints have increased about the unpleasant taste of the water and the increased cloudiness, which has pushed them to purchase water cartons from the market.

Saad, a resident from one of the capital’s neighborhoods, told Sada al-Sham: “It’s been years since we drank pleasant water, as [now] there is always a strange taste to it, in addition to the fact that its color is clouded white. We were boiling water, and then cooling it and placing it in the refrigerator to reduce this flavor a little,” the man said.

He added: “There are some who set up filters for this purpose, while others have gone to buy water, although they are few because this is expensive, as the price of one barrel is 1,000 Syrian pounds.”

This situation has worsened recently in terms of the water’s taste and turbidity, and so the old methods residents had been using were no longer viable, as they became forced to buy water from owners of tanks, according to Saad.

Abou Mohamad al-Midani, a Damascus resident, expressed his surprise at the “difference in the water situation between one district and another, as there are districts suffering from a deterioration in the water quality to the extent that it isn’t fit to drink, and others which are better to some extent, and a few others who find their water as sweet as we remember Damascus water being 20 or 25 years ago,” he explained.

He added: “The problem isn’t in the poor quality of the water but also the poor access to it, as we often need to operate a pump to fill the tanks on the roofs of our houses. But in many instances not even the pumps can withdraw the water.”

Complaints from residents have increased recently over the poor quality of water which has rendered it undrinkable for many people, as well as unequal distribution among districts and the weak pressure. But Damascenes have begun to doubt the source of their water after examining its strange characteristics.

Some have begun to fear that the water coming from the wells is not only calcareous but “polluted chemically and bacterially and that it is unfit to drink,” according to leaks from inside the drinking water and sanitation institute in Damascus, which is under the regime government’s authority.

Doctors warn of the danger of calcareous water due to its effects on kidney function or its connection to causing skin diseases in the event it is used for washing.

The activist Omar al-Shami told Sada al-Sham that the poor water situation is not limited to pumping calcareous water to millions of Damascus residents or mixing it with Al-Fijeh spring water in other districts. He explained there are also reports indicating that a number of Damascus wells could be bacterially polluted and that the amount of chlorine added is unable to purify it.

He said that the reasons for this pollution relate to runoff from agricultural fertilizer remnants into rivers and groundwater, while leather tanning workshops which produce a large amount of toxic substances, including lead, arsenic and heavy metals have contributed to the pollution of groundwater. This has been worsened by the mixing of sewage and water networks and groundwater, due to a lack of maintenance and their proximity to each other. All of this has created liver diseases and severe gastrointestinal infections, which have harmed residents, especially children and the elderly.

With the rise in complaints from residents about the situation, the head of the general institute for drinking water and sewage in the Damascus governorate and its countryside, Mohamad al-Shiyah, released a press statement that ended people’s hopes for a solution.

In it he said: “it is difficult to address the situation and there no use and no solution for it because there is nothing to help reduce the amount of lime in it [the water].” But he reassured residents that “the drinking water in terms of health effects has no problems” and that it is “within the approved Syrian standards, apart from the differences in its taste.”