The Syrian government is preventing the entry of aid, including medicine, into the rebel-held district near the capital 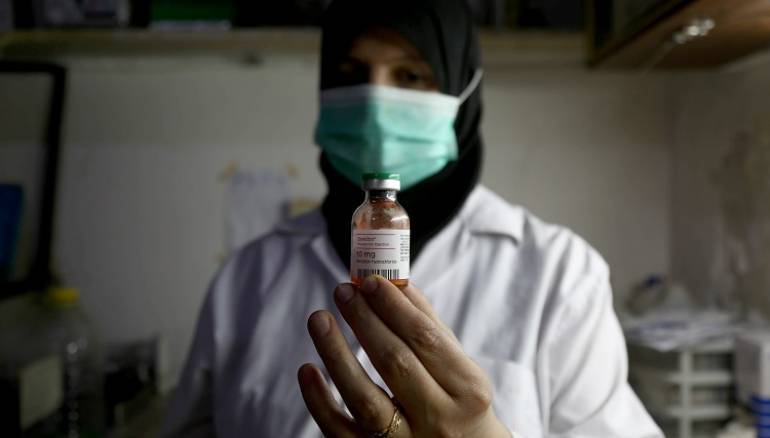 Most cancer patients in the Eastern Ghouta suburbs of Damascus are unable to receive treatment amid a medicine shortage due to the Assad regime’s blockade of the district.

Dr. Wissam al-Riz, a cancer specialist at the Rahma Medical Center, told Zaman al-Wasl that the center is currently suffering from the depletion of chemotherapy drugs, endangering the lives of cancer patients. She noted the total number of cancer patients has reached to 1,200, including 559 in treatment, most of whom are women and children.

Dr. Riz added that the center is the only one of its kind to treat cancer patients in the Eastern Ghouta, and the current stock of medicine only covers the needs of 3 percent of the patients.

She confirmed that 20 patients, including five children, had died in the past three months due to lack of medication and due to regime banning the patients' evacuation from the Ghouta to receive required treatment.

Abou Mohamad, a cancer patient, said he still hopes to get the appropriate treatment to be able to live and raise his children. He told Zaman al-Wasl, “today I receive reduced treatment, I could not resume my chemotherapy due to the blockade and now I am given intravenous doses a few times less than before due to lack of these doses.”

"In such circumstances, hope remains the only cure for cancer patients,” he said.

According to Dr. Riz, managers of at Rahma Medical Center have repeatedly contacted aid organizations located inside and outside Syrian territory, in addition to some members of the political mission and several humanitarian associations. But their cries for help have gone unheard.

"We try to make our patients heard and neutralize [or remove] them from the conflict, especially since 80 percent of them are women and children, and they have nothing to do with what is happening on the ground," she said.

The Rahma Medical Center was established in mid-2013 to treat malignant tumors and cancer. The center provides free treatment for most cases in the Eastern Ghouta.