It is expected that the city on the Syrian-Iraqi border will host a large battle between ISIS and regime forces in the coming days, Sada al-Sham writes 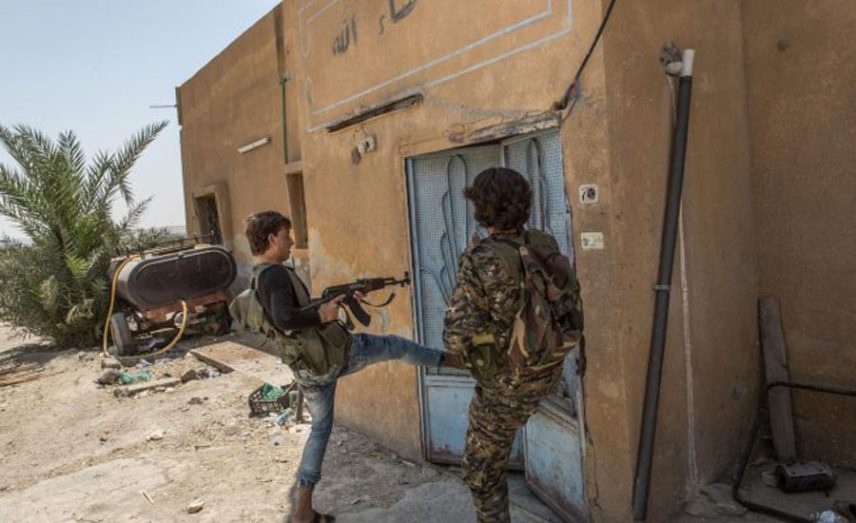 Pro-Assad forces and the Syrian Democratic Forces' fighting against the Islamic State (ISIS) group continues in the city of Deir-ez-Zor and its countryside amid competition over oil fields, city centers and the race to reach the border with Iraq, specifically the city of Albu Kamal, the last major stronghold of the hard-line group in Syria.

The SDF, which is backed by America, has taken large swaths of land from ISIS through fighting or under-the-table agreements, while regime forces have met fierce resistance from the group in the districts of Deir-ez-Zor city.

ISIS fighters withdrew with all their light and heavy weapons from the Al-Jazira area east of Deir-ez-Zor toward the city of Albu Kamal on the Syrian-Iraqi border. It is expected that the city will host a large battle between ISIS and regime forces in the coming days. Meanwhile, the Kurdish-led SDF has taken areas where the group’s fighters have withdrawn.

Sources said that the withdrawal came as a result of a secret agreement between the SDF and tribal sheikhs in the area, which provided for the the group to withdraw from wide areas of the Al-Jazira region north of the Euphrates, including the Al-Tanak oil field in eastern Deir-ez-Zor, in addition to the Al-Omar field which the group surrendered to the SDF days ago. With these developments, these forces are positioned just about 17 kilometers away from the Syrian-Iraqi border in the province’s eastern countryside.

The Russian Defense Ministry has previously accused the SDF and the international coalition of collaborating with the organization against regime forces, and has published images of American vehicles deployed in areas under the group’s control.

Both the regime and the SDF are racing to control the last ISIS strongholds in easternmost Deir-ez-Zor, and the city of Albu Kamal on the Syrian-Iraqi border. The regime forces have launched a military campaign around the T2 base south of Deir-ez-Zor, which it took control of after seizing the strategic Hawijat Sakr area.

Regime forces had taken control of the industrial district in the city of Deir-ez-Zor and entered into fighting for control over the city’s districts which remain under the group’s control, most importantly the Al-Hamidiyah district, as clashes continue to rage between the two sides.

The regime forces operations in Deir-ez-Zor coincide with a successful advance in the province’s south over the last few days, through which it took control of the city of Al-Mayadeen, and is now focusing its sights on Albu Kamal on the Iraqi border, which is the last major ISIS stronghold in Syria.

Regime forces backed by Russia are trying to reach the city through a military operation from two sides: The first the city of Al-Mayadeen east of Deir-ez-Zor and the second from the T2 base in southernmost Deir-ez-Zor on the Iraqi-Syrian border.

The Euphrates is considered the dividing line between the SDF and the regime in the province, which has seen clashes between the two sides in a number of areas on its banks, the latest being the SDF seizing the village of Dhiban from the Syrian regime.

Iran is counting on the city of Albu Kamal as it acts as a connection between Iraq and Syria, which could facilitate the opening of a safe path for from Tehran to Iraq and then Syria and Beirut through Albu Kamal.

Civilians hope for return to home in Raqqa

Meanwhile, people of the city of Raqqa are looking to return to their homes and lives which have been mostly destroyed as a result of months of war against the ISIS group, during which coalition planes dropped thousands of tons of munitions on the city.

Some residents of the Al-Mashlab district on the eastern outskirts of Raqqa have tried to return to their homes, but the SDF, which is in control of the city, opened fire at them, wounding many. Residents say that the Al-Mashlab district has been outside ISIS control for more than four months and there is nothing preventing their return, but there are bases and housing for Kurdish militia forces there as the area is free of mines.

Activists say that there are a number of districts in the city which have been free for months and cleared of mines after the withdrawal of ISIS, such as Al-Mashlab and Al-Daraiya, but that the SDF has not allowed residents to return. They believe the real reason for preventing the return of residents is to provide a chance for militants to loot and steal inside the city.

Some sources say that the SDF forces have looted homes and stolen generators which were providing the area with power, as well as clearing out stores in the industrial area near the Al-Mashlab district.