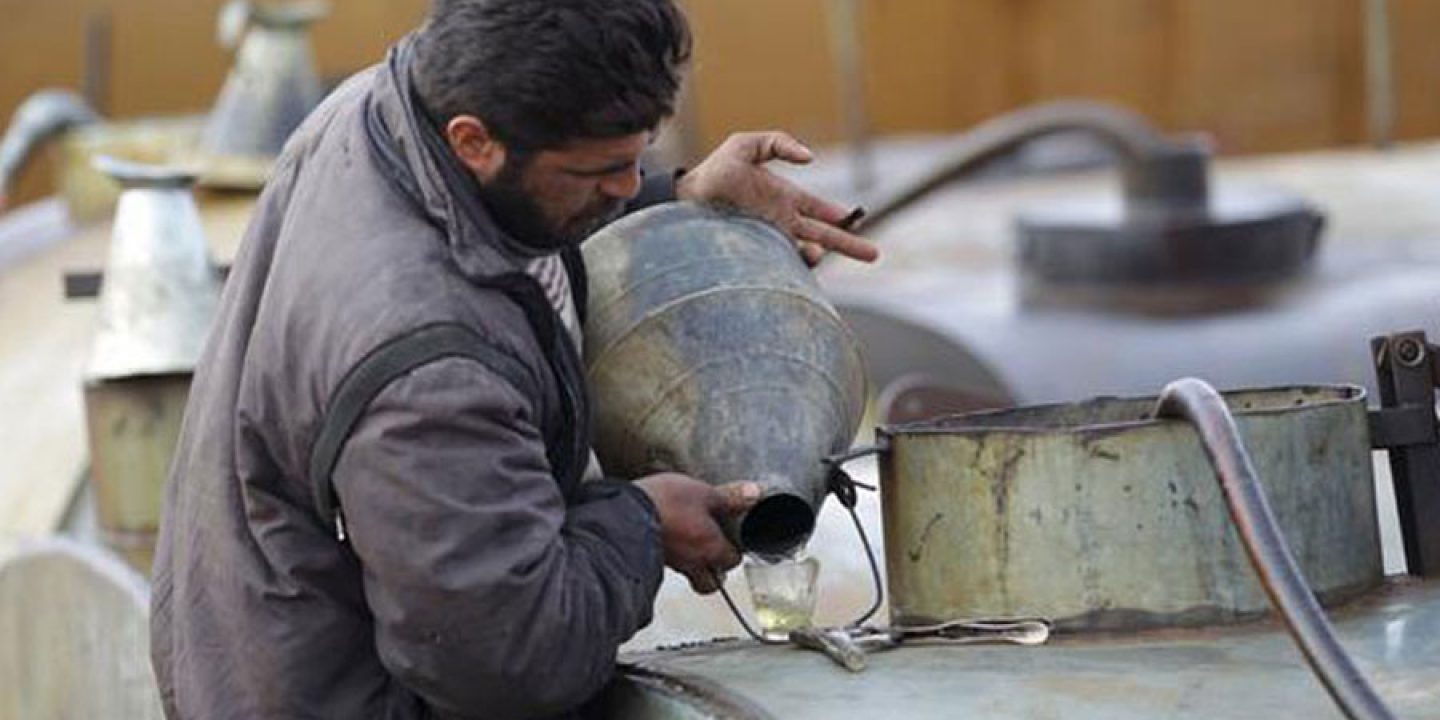 The geographical map for the (Kurdish) Self-Administration’s federalist project in Syria’s northeast has neared completion with the seizure of the city of Raqqa from the hands of the Islamic State (ISIS) group.

The region, beginning from Hassakeh province in the farthest northeast, up to the city of Manbij in the northern countryside of Aleppo, to Raqqa and the countryside of Deir-ez-Zor in the south, is awaiting a new transformation based on local administration elections, expected to be held some time in November.

Faced with this reality, questions have been posed about the economic sources on which this project depends, which will be the economic backbone of the area if the map continues on its current path, to ensure the Self-Administration is in a position of self-sufficiency and to ward off the specter of economic deficiency.

Speaking with the independent analysts and the Self-Administration’s own financial and economic officials, Enab Baladi has attempted to identify the economic resources which will be the central pillar of the region, and the steps proposed to utilize them.

According to some officials, the areas of northeastern Syria will depend largely on oil and agriculture resources. Prior to 2011, this Al-Jazira region was considered the breadbasket of the country, as the national oil reserve depends on dozens of wells present there.

The Al-Jazira area includes strategic oil and gas fields, including Rumailan, Al-Shaddadi and Al-Jabsa, which the People’s Protection Units (YPG) took in mid-2012. Most recently, it took fields in the countryside of Deir-ez-Zor in September, including the Koniko and Al-Jafra. The number of oil wells totals 1,322 in the Rumailan field.

The fields are run by the Rumailan Oil Field Administration” under the Self-Administration’s energy directorate, whose tasks focus on crude oil production and treatment.

Enab Baladi spoke with the co-deputy of the energy directorate, Samar Hussein, who said that the number of wells currently in operation was limited compared with the total number of wells in the fields.

She added that the largest number of wells had stopped operation and were in need of a number of materials to renovate and repair them.

Regarding the sale of oil produced by the fields and the revenues they earn for the Self-Administration, Hussein explained that the directorate was not concerned with matters of oil disposal or sales.

Sources told Enab Baladi that the Self-Administration had commenced the export of oil from the Rumailan fields to Iraqi Kurdistan, and from there to global markets, at a volume of 60,000 or 70,000 barrels a day.

Previously, the Syrian regime had granted permission to the YPG to operate the fields in exchange for a portion of revenues and oil, but ambiguity remains over the current state the deal between the two sides.

Alongside dealing with the Syrian regime, a portion of the Syrian oil and gas is sent to northern Iraq through illegal smuggling routes, where it is mixed with Erbil’s oil.

However the official in the energy directorate denied that oil is passing through these pipelines, saying that “there are definitely no transport pipelines for the oil in any direction, and most of the oil pipelines have been destroyed or damaged by terrorist groups.”

75 percent of area’s economy is agriculture

The agricultural economy currently comprises about 75 percent of the area’s economic map, with livestock occupying about 15 percent, as well as trade through commercial crossings, whether deeper into Syria or to Iraqi Kurdistan, passing through the Semalka crossing or through Jarablus to the Euphrates Shield areas, according to the deputy of the Self-Administration’s economy directorate.

He said that the agriculture sector had priorities, led by the cultivation of wheat, which produced in recent years between 550,000 and 600,000 tons, in addition to the production of barley and legumes.

He noted the presence of agricultural plans in the coming stage for the production of wheat to reach about 65 percent of the planted area in the region, in addition to 15 percent vegetables, cotton and legumes. There are also ongoing studies to determined how to achieve self-sufficiency in basic agricultural products, especially wheat and seeds.

The Self-Administration’s budget for 2016 was 2.7 billion Syrian pounds, based primarily on a number of sources, most prominently oil and gas and agricultural resources. This was accompanied by customs fees imposed on goods which enter the Al-Jazira region from Iraqi Kurdistan.

Given the importance of wheat as a basic staple for the area, the Self-Administration has prevented the export of the grain to neighboring regions, while allowing barely and legumes to cross to Iraqi Kurdistan and Turkey, as well as neighboring regions inside Syria.

The deputy said that the economic directorate had granted permits to transport into the Syrian interior, including the governorates of Damascus and Aleppo, and another portion to the Bab al-Salameh crossing to Turkey passing through the city of Manbij.

Abdel Moneim al-Halabi, an economic expert at Gaziantep University in Turkey, said that the “areas under the control of the so-called Self-Administration are areas with major agricultural capacities, but the policies pursued in the region, in addition to subsequent developments which a number of these areas have undergone, have resulted in losses of large sections of human resources, labor power and expertise in the agricultural fields as a result of displacement, especially among young people.”

Halabi told Enab Baladi that the Self-Administration is dependent on its oil resources, “and likewise the huge fees it received through checkpoints and illegal crossings, and on the commercial transport to areas, even to areas under its control.”

The Self-Administration also depends on foreign support from the United States and some Western countries, as well as Gulf countries under the guise of the role which they play in the so-called “war on terror,” according to Halabi. The expert said he believes “the military situation will not last long in the Self-Administration’s favor, and is a temporary solution, even if it lasts another few years.” He pointed out that those responsible “will not be interested in developing the capacity for regional autonomy under their control as they are interested in obtaining returns from a variety of sources, most of them illegal.”

With regard to oil, Halabi said that “all the operations in this sector are currently conducted through staff which was previously working under the regime’s agreement, with assistance from Western consultant experts.” He added that “the regime is reaping great benefits comparatively without having to bear the security and logistical burdens needed to utilize the oil in these regions, considering what it was subjected to in terms of military and security developments beginning in 2012.”

In a separate development, the Kurdish Asayish (security) forces seized banks under the Syrian regime’s control last week, in a surprise step which raised a number of questions around its reasons.

Halabi said that “the banks are not an economic force, but the financial and economic services sector is based on the surrounding economic, administrative and financial situation, and the confiscation will not have any effect on where this goes, and is a means of military pressure more than anything else.”

Deficiency in electricity and industry

The Self-Administration’s dependency on energy resources in the coming stage will be subject to a difficult reality regarding its access to electricity.

The energy directorate official Hussein said that the Al-Jazira canton needed 500 megawatts, while the amount produced by the gas turbines in other areas no more than an average of 50 megawatts, which goes up to 60 megawatts in the winter.

Hussein said that 25 of these megawatts go continuously to supplying the water stations and mills, and the remaining portion is distributed, with a portion of electricity withdrawn from the Tishreen Dam in a controlled manner.

Regarding the dams, the official said the Self-Administration “cannot depend on the dam’s electricity because it is produced from turbines which require portions of water in the dam’s lake to operate, and the Turkish government has reduced the water’s flow in the main stream by diverting water into a number of tributaries which were previously dry.”

The industrial sector suffers from the same conditions, as the industry is characterized by a shortage of raw materials and the necessary equipment and parts, which are obstructed from entering into the area by a blockade imposed on the region from all sides.