As young men are pursued by the Assad regime to serve on the active fronts, many Daraa residents are instead vying for the benefits of joining a new Iranian-led militia 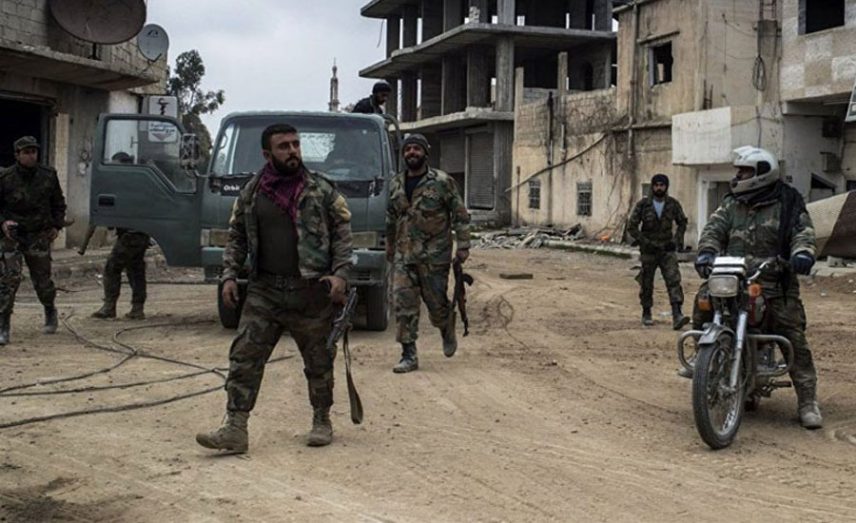 Iran has continued its attempts to expand in southern Syria despite international agreements aimed at curbing its role in the area, amid the latest Russian-American deal which provided for the end of fighting in the city of Daraa and for President Bashar al-Assad’s forces and allied militias (foreign and local) to withdraw from the Jordanian border.

The influential countries in southern Syria consider the arrival of Iranian militias to the Jordanian-Syrian border and the border of the Israeli-occupied Golan Heights to be “a red line,” which has necessitated direct interventions. Despite this, Iran has continued its expansion as part of the encirclement which it has pursued in recent months.

Daraa in recent days has witnessed surprising competition between Iran and Assad’s forces around the conscription of Syrian young men from the province, as well as the formation of a new force, Brigade 313, which is under the authority of the Iranian Revolutionary Guard.

Safwan al-Jamaat, one of the people who joined the brigade before fleeing to areas under opposition control, said that the process of conscription to the new formation largely targeted those wanted for mandatory and reserve service in the Assad forces.

He told Enab Baladi that he enrolled out of fear of being sent to the fronts in other provinces, as those who joined this formation would stay deployed in Daraa where Assad’s forces could not pursue any of its members.

Despite the Iranian-led brigade only being around for a number of months, it has attracted more than 200 young men.
Jamaat said that members who were conscripted for the formation were young men from Daraa who were known to work on behalf of the regime, who were currently promoting the force based on its benefits, and the salary which its members received.

Jamaat said that all those who he had met from the force were Syrians, but members had repeatedly told him that the formation was directly under the command of the Iranian Revolutionary Guard.

Enlistment takes place at the Brigade 313 headquarters in the city of Izra, and new members receive an ID which has the logo of the Revolutionary Guard, ensuring his ability to pass through Assad forces checkpoints. Two weeks after joining, recruits are enrolled in training camps in Izra and Al-Sheikh Maskin.

Jamaat said that those in charge of the new formation repeated talk about what they called “the successful Lebanese experiment of Hezbollah” as it seems they aim to repeat this experience anew in southern Syria.

From another angle, opposition groups have voiced indifference toward the new Iranian measure in the south, as one Free Syrian Army commander, Youssef al-Zoabi, told Enab Baladi that confronting Iran has become a reality for rebels, no matter what name their loyal forces they work under.

He told Enab Baladi, “There is no difference between the enemies, whether they are called the Syrian army, Hezbollah, or the Republican Guard, or any name of the dozens of foreign militias.”

Regarding the Iranian focus on conscripting Daraa residents and placing them into battle with other residents of their province, the commander said that any fighter alongside the Assad forces is “a traitor no matter his nationality and whatever his origin.”

He said that the rebel groups had previously fought fighters from Damascus, Idleb, Homs and elsewhere, “all of them from rebelling areas … they represent themselves and do not represent these areas at all, and the issue will not change if we confront one from Daraa. We will not hesitate to fight them.”

Speaking on the necessary steps for the opposition to confront the Iranian expansion, the commander said that they were adhering currently to the “de-escalation” agreements and the southern Syria truce and were relying on the regional role in this context.

He said that since the truce was announced, the rebel groups had received Jordanian assurances that the agreement will include Iran, adding that its militias are forbidden from approaching southern Syria. “We are waiting for a decisive regional position toward this new formation which is a violation of the agreement,” he added.

The possible future scenarios, according to the commander, remain limited to the military option in the event that political solutions fail to end Iranian ambitions in Syria, specifically in the south.

The arbitrary arrest campaigns which Assad forces have carried out with the aim of conscripting into their ranks in Daraa has pushed hundreds of young men to flee to areas under rebel control or to travel outside Syria. Now a new option has appeared before everyone, which many residents see as a surprise in its time and place, but it could bear a much larger project than it appears today, as the opposition contently watches on.