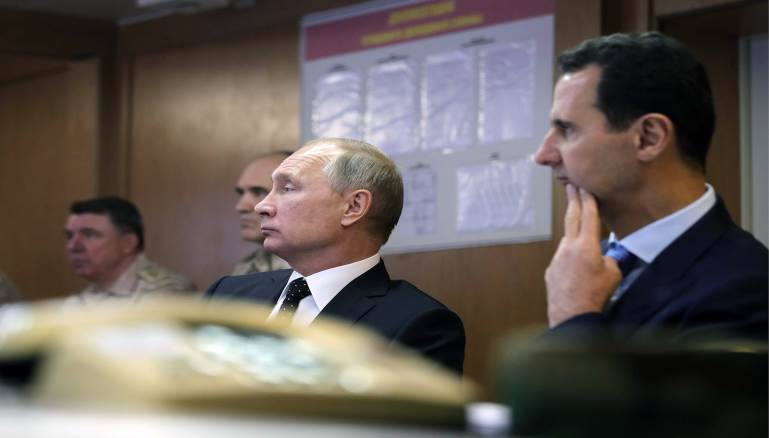 On the sidelines of the Carnegie Center Middle East second annual conference, “A World on Edge: What to Expect in 2018,” Al-Modon met up with the director of the Carnegie Moscow Center Dmitri Trenin to follow up on a conversation that began a year ago around Russian aims in Syria and the world from the Kremlin’s perspective.

The discussion began with a recent statement from U.S. National Security Adviser H.R. McMaster in which he said that in America, “Geopolitics are back and they are back with a vengeance.” Was this influenced by Russian policy which has long seen the determinants of world politics from a geopolitical perspective?

Trenin believes that this is correct. But the United States as a hegemonic force, at least since the end of the Cold War, was able to exercise a “Pax Americana” from the perspective of the world recognizing its dominance, and this is now changing. It was a rare period in human history, in which one country was dominant essentially over the whole world. But, as with everything in human affairs, there is a point where that hegemony will end.

Initially, the global financial crisis of 2008 overthrew the image of American capitalism as high capitalism. This occurred, according to Trenin, because of the Chinese, who were at that time convinced that the “Beijing consensus” was opposed to the “Washington consensus” as an economic model. In 2014, Russia intervened in Ukraine and in 2015, it intervened militarily on its own in the Middle East. This was the first time since the end of the Cold War in which a great power has done so, this far from its borders, without the consent of the United States, and without it being a part of a U.S.-led alliance. This overthrew the United States’ hegemonic position in the East and in the world.

In 2016, from the view of the Kremlin, Russia launched a counterattack which America called a “blatant aggression” on its sovereignty by Moscow to influence the results of the American elections. From the Russian point of view, Moscow did not do anything that the United States has not done before.

We live in a different world, according to Trenin, where great powers such as China and Russia, and other powerful countries in their own regions, are trying to achieve their specific interests and policies, as is the case with Turkey, Iran and Saudi Arabia. The United States cannot fully control all small developments in this region, and this is another major change.

This is in addition to a revolution in the concept of deterrence, as with North Korea, a Third World country which is backward in every sense of the word but possesses advanced lethal weapons with which it threatens the United States.

Trenin does not believe that Russia is an adversary the United States, if we look at gross domestic product and other issues — Russia is much smaller, and it is not the Soviet Union. But Russia has returned as a major power recognized by other great powers and it wants the United States to deal with it as an equal.

Russia has spent $1.5 billion on its operations in Syria, which is not a large sum, according to Trenin, and has been able to reduce its spending to this extent by relying on smart tactics and smart military strategies, coupled with a good understanding of the political realities, a very strong will, and great domestic support to Putin. Russia does not need to think of itself as a great power or an equal power on the level of the United States. Serious people in Russia do not believe that.

Russia has achieved what it planned to implement in Syria, despite it taking a long time and operations not always unfolding as political leaders hoped. The Russians achieved militarily what they planned: The defeat of the Islamic State (ISIS) and bombing the opposition into coming to the negotiating table. What Russia now needs is to transform its military success into a diplomatic strategy. But the diplomatic phase is harder than the military, in which Russia was clearly the dominant military factor, while others were weak and moving in the margins, as was the United States, which did not try to overthrow Assad and wanted to avoid war with the Russians in Syria.

In the diplomatic phase, Russia needs to deal with Assad, who has become stronger and does not want any major political change in the way Syria is run. “Russia has less influence over Bashar, because he survived and has become bolder, thanks to the Russians, but this is now history, and Bashar is no longer a president in trouble and subservient to the Russians as they say. Assad is in a stronger position.”

Trenin has devoted a whole chapter of his new book, “What is Russia up to in the Middle East?” to the Russian war in Syria, taking advantage of his background as a former officer in the Red Army and his knowledge of the decision-making circles in the Kremlin.

Iran, Russia’s ally in the war, was a circumstantial ally and does not necessarily need to be a close partner on the diplomatic level. Iran has its own ambitions in Syria which Russia does not share. Russia is not supporting Iran’s strategies for the region and so the relationship could change between the two sides. Unlike in the military stage, the differences are more important now, as Russia must now deal with other players in the region, like Saudi Arabia, Israel, Turkey and Qatar. Israel will not be happy with the Russia-American de-escalation agreement in southern Syria because it fears Iran’s Shiite militias coming near the Golan Heights.

The relationship between Turkey and Russia is very complicated and they have clashed previously in Syria, which led to months-long antipathy, which was contained in the end but is something not forgotten. The Turks have their own interests, at least with respect to the Kurdish issue. Russia hopes that the Kurds will be a party to a settlement, and it is not possible to exclude them. The Russians prefer a sort of independence for the Kurds, as in Iraq, but understand Turkey’s “legitimate” security concerns and Russia does not want Turkey to be undermined by Kurdish rebels.