Several Kurdish bodies are vying for a place at the negotiating table ahead of the National Dialogue Conference in Russia's Sochi, Al-Modon writes 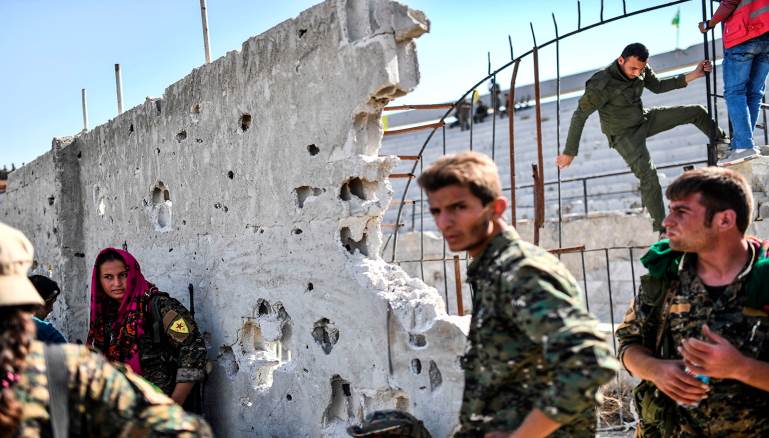 Kurdish sources said that the Syrian Democratic Forces are continuing to conscript young Arabs and Kurds in an operation it described as “volunteering” within the “Border Guard” forces.

The guard’s general commander, Seyamand Walat, announced the formation of the force two weeks ago, confirming efforts to establish a North Syria Army with a strength of up to 100,000 fighters. The new army plans to include forces from the Border Guard, the People’s Protection Units (YPG) and allied forces who participated in fighting the Islamic State (ISIS).

Walat said that conscripts were receiving support and training from the U.S.-led international coalition forces with the aim of protecting the areas within the borders of the Federation of Northern Syria, in addition to Raqqa, Tabqa, Manbij and Deir-ez-Zor.

The Border Guard forces are supplemented with Self-Administration forces trained at the Martyr Ghanem al-Dhiab Academy south of Hassakeh, with 240 members graduating as part of the first batch.

The Kudish Self-Defense Forces had issued a decision to extend the term of “self-defense duty” from nine months to 12 months.

The Self-Defense Forces has training camps in Kobani, Afrin, Manbij and Al-Darbasiya and a developed military academy in the city of Amuda. The first batch of officers graduated at the end of August 2017. However, the talk about the formation of a border protection force was not followed by a statement or clarification from an official body outlining what borders this force would protect. It appears that the promotion of this news is part of the media campaign concerning the nature of the representation of the Democratic Union Party (PYD) and its allies at the Sochi conference.

A statement issued by the Kurdish National Council called on the PYD to stop imposing dominance by force of arms on the Kurdish street. The statement on Friday condemned what it described as exclusionary and authoritarian practices carried out by the PYD and called for the release of political prisoners.

The Council’s most important fears may be losing its role as a political representative for the Kurds in the Sochi conference, especially after YPG commander Siban Hamou's announcement on the Russian agreement for the Self-Administration to participate in Sochi after he returned from his visit to Moscow weeks ago.

The Kurdish issue in Sochi is no less complicated than other issues. The regime and behind it Iran do not hold Kurdish cards at Sochi. Meanwhile, Russia, Turkey and the United States are discussing the Kurdish role in northern Syria.

Despite the intersection of Russian and Turkish interests in confronting the American endeavor, Russia is sticking to Self-Administration participation in the Sochi conference, which could stir the ire of Ankara, which is trying to impose its allies on the Kurdish National Council and Kurdish political figures, such as opposition figure Abdul-Basit Saida, who it wants to represent the Kurds in Sochi.

Advisor to the joint presidency of the PYD, Sihanouk Dibo, said that the participation of the Democratic Union Party, Self-Administration and political forces representing the “will of the peoples of Rojava and northern Syria” had a great chance. Dibo told Al-Modon that “Turkish traps could not prevent this. Certainly the Turkish regime’s feeling that it can prevent our party and Self-Administration representatives from attending the Syrian negotiation meetings is burning the Turkish cards. Russia and America have forced Turkey to walk on Syria’s moving sands.”

The Council statement, which called for international forces to stop the PYD from dominating the Kurdish street by force of arms, conscripting young men and establishing artificial courts, also calling for the Kurdish position to be unified, came after the meeting with the Turkish Foreign Ministry. The PYD will not accept the Council statement and has not prevented it from attending Sochi. It does not present itself as a Kurdish force but as a representative of various segments of society in northern Syria and has prepared its representatives on this basis.