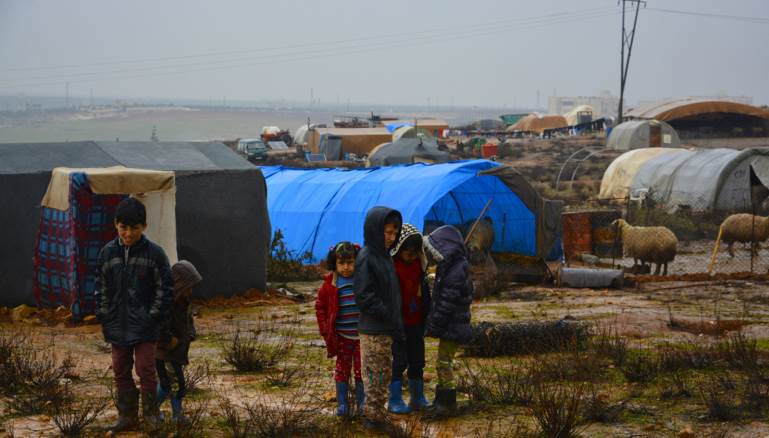 Regime military operations in the countrysides of Idleb, Aleppo and Hama have forced thousands of civilians to leave their homes and villages in search of safer areas. Despite the air and artillery strikes affecting most of the Idleb countryside, the displaced people are dispersed with their meager belongings across agricultural land on the outskirts of cities and towns which lie just a few kilometers from the front lines.

Assad forces and their allies are still striking populated areas in the environs of clashes on a daily basis, west of the Hejaz Railway and around the Damascus-Aleppo International Highway, from the town of Murak and the villages of the northern Hama countryside, up to the cities of Khan Sheikhoun, Maarat al-Numan, Khan al-Subl and Saraqeb in the southern and eastern Idleb countryside.

The flow of refugees continues unabated after regime forces eased the crossing of the Islamic State (ISIS) organization from the villages of Uqayrbat toward the eastern Hama countryside and the southern Idleb countryside. The group took control of the Rahjan and Badiya areas after heavy clashes erupted, which drained rebel groups. This coincided with the beginning of regime military operations which resulted in it seizing, with ISIS, wide swaths equivalent to about a third of Idleb province.

The Hama, Idleb and Aleppo countrysides have witnessed major displacements, forcing most fleeing civilians to abandon their possessions to reduce weight, in hopes that the military operations will end and they can soon return to their homes. However, the regime forces looted what remained of civilians’ possessions and furnishings after their military machine crushed most of the towns south of the Abu al-Duhour air base. Regime forces carried out summary executions against civilians who did not leave their villages south of Aleppo, while east of Hama the ISIS organization began its ritual of burning some civilian property and destroying the graves of their ancestors on the justification it did not accord with Islamic Shariah.

Some displaced people were killed and their cars destroyed as they fled. The civilians departed under various types of shelling over main and side roads, despite airstrikes day and night. The road between the city of Abu al-Duhur and Saraqeb was a lifeline for civilians, but helicopters struck it with barrel bombs and naval mines. Displaced people who owned livestock have looked to agricultural land to lay down their belongings and set up their tents in the open air. Informal camps and shelters were set up around the villages and cities of Idleb, such as Saraqeb, Sarmada, Atmeh, Salqin, Jisr al-Shughour and Ariha, as well as along the road between Maarat Masrin and Sarmada and the towns and villages west of the Aleppo and Hama countrysides.

Given that some of the camps have been set up over private property, some have been forced to move, or pay as much as $200 for a square kilometer, despite some of the land being common or public land. Abou Saeed, a displaced person, told Al-Modon: “I was forced to move the tent after setting it up because the land was private property and I don’t want to appeal to civil organizations — none of them have come to the camps in around Idleb city, and because I’m new to the area I don’t know where the offices are. The groups should come to us, not the displaced people going to them. I bought a used tent at a high price, but it’s worn out and the rainwater leaks inside. My family left the southern Aleppo countryside as a result of the heavy battles. When I returned I tried to take some items from my house, but the regime had taken control of the village.”

A portion of the displaced people are spread in individual camps inside the administrative borders of the cities, while others are trying to find vacant apartments without success, as most of the houses are rented out at high prices due to the previous rounds of displacement from the Damascus, Homs and Aleppo countrysides and the continuing displacement from Deir-ez-Zor and Raqqa.

Previous waves of displacement have exhausted most of the humanitarian groups working in Idleb province, and the Salvation Government and Coalition Government are overseeing administration of civilian affairs, with the number of service organizations estimated at 290. Some small camps have been set up west and north of Idleb. There has been no quick response from charity groups because of the increasing number of displaced, nor notable work on distributing basic necessities such as tents, water, heaters, food or clothes.

The difficult living conditions inside the city have not prevented residents from working voluntarily to secure donations for displaced people. But despite the decline of education and the lack of students, abandoned schools have not been opened to receive displaced people inside them. The rainstorms which strike the country have drowned displaced camps as a result of water leaks which have made living conditions into a disaster.

Umm Hassan told Al-Modon: “Where are the humanitarian groups? Some come to take pictures and that’s it, and then after that some food comes which is not enough for four tents.” She adds: “I have been here for two weeks with my girls and their children. I lost my husband in the bombing on the eastern Hama countryside, and without any provider I rely on selling sheep's milk and chicken eggs to secure basic needs. Everyone knows the situation of the informal camps, especially in the eastern Saraqeb countryside.”

An aid drive has been launched under the name “Greater Idleb Campaign,” and is overseen by seven civil society groups, including the Turkish IHH group and the Kuwaiti Rahma organization, in which aid baskets, meat and some clothes and blankets have been distributed to families in apartments and buildings. The campaign is expected to begin another stage to include informal camps.