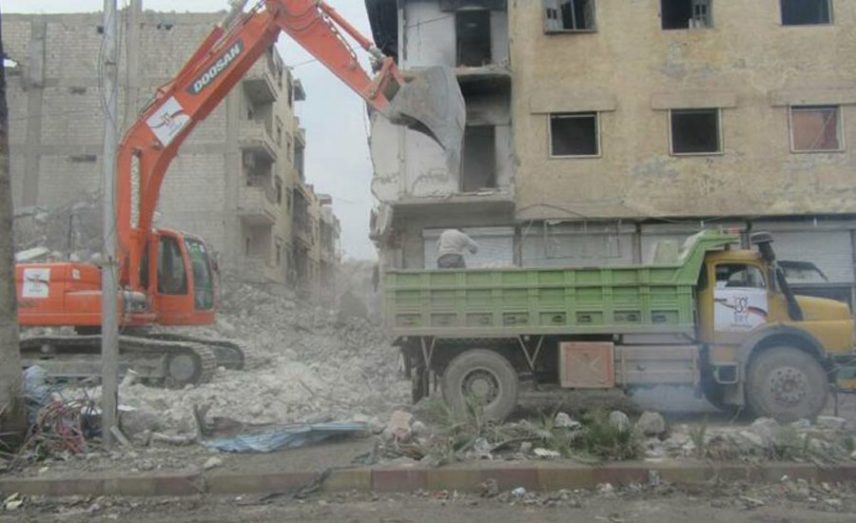 Residents of Raqqa are facing numerous hardships brought upon by the destruction of most of the city’s buildings and the accumulation of rubble in the streets, as many areas also lack access to basic services like electricity and water.

In light of the deterioration of the city’s services, the Raqqa Civil Council said in a statement that organizations have begun to coordinate with it on working to clear rubble, according to a plan to divide the city into sectors in order to facilitate and speed of work.

Work began on rebuilding Raqqa on Jan. 15 with the aim of restoring life throughout the city at a swift pace, with support from the reconstruction committee and committees of the Raqqa Civil Council.

The head of the construction committee in the Raqqa Civil Council, Ibrahim al-Hassan, said that the organization “is trying, within its priorities, to restore the electricity lines and water networks and to clear rubble and repair health centers, schools and bridges.” He added that “the city has been divided into eight sectors for reconstruction, beginning from the Al-Mashlab district east of the city toward the center.”

The blockage of roads by the rubble of destroyed buildings and bridges is one of the biggest problems affecting residents of the city and its countryside, as bombardment has destroyed most bridges, especially those at the main entrances to the city. This includes the southern bridge, which connected the city to the areas south of the Euphrates, and the Al-Sawamah bridge, which connected it to the northern areas.

With the main road cut off from the western side, residents are forced to pass through a long agricultural road which now lies in bad shape due to the crossing of thousands of cars and trucks daily.

Khalil, who works in a workshop to clear rubble, said: “Work has begun to repair communications towers in the Athar Harkala area, while satellite dishes have been set up at the tower close to the post office and the clock tower in the city.”

He added: “The towers which were not bombed need repair and electricity to be provided through generators or batteries to return to work.”

Residents also suffer from difficulties in securing water, as they are forced to buy water from private tanks at a price of 250 Syrian pounds for each 200-liter barrel. One NGO is distributing water for free to residents, but the quantities distributed are insufficient given large amounts of water needed. Most of those returning to the city are in severe need of a great deal of water, especially after being displaced for more than six months, and so they are waiting for the repair of the main pipeline, which feeds the whole city from the main water pumps at the old bridge, which were damaged as a result of airstrikes.

Lack of electricity is one of the main problems residents face inside the city, not just because of the difficulty of repairing the severely damaged internal network, but also due to the difficulty of connecting the Euphrates Dam due to the Al-Mansoura Dam going out of service.

Electricity had previously reached Raqqa through its network being connected with the Al-Farousiya station on the northwestern outskirts of the city, which fell outside the Islamic State (ISIS) group’s control about three months ago.
Electrical current produced by the Euphrates Dam currently feeds areas and towns of the eastern Tabqa countryside, up to the town of Al-Mansoura about 35 km west of Raqqa, as well as the towns and villages of the western countryside up to the Al-Rasheed farm west of Raqqa.

Regarding the Raqqa dams' production of electricity, one of the officials in the repair workshops, who asked not to be named, said that “the Euphrates Dam near the city of Tabqa is working with three turbines, producing about 300 megawatts, of which part goes to regime-controlled areas in the eastern Aleppo countryside as well as the Hassakeh line.”

The source said that the major damage sustained by the city’s infrastructure, including the electricity network, will prevent electricity being supplied in the near future, adding that there are other obstacles facing repair, such as mines and tunnels near the Al-Mansoura Dam.