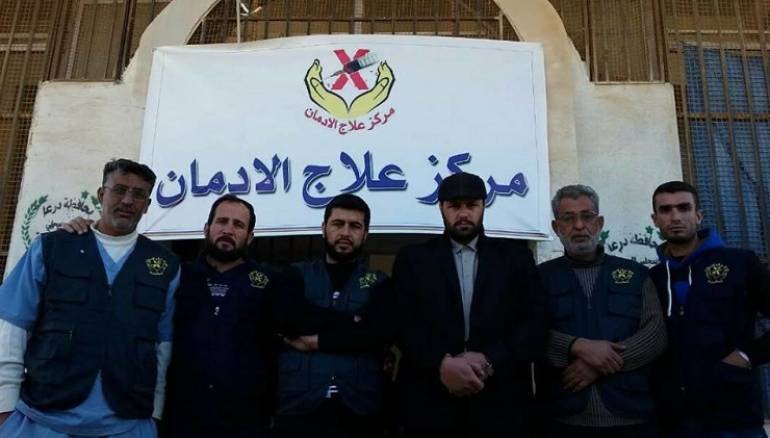 Seven years of Syria's war has imposed repercussions that are more serious than the war itself. Some of these consequences have stormed society with the aim of weakening, dismantling and eventually destroying it.

Abou Bakr al-Hasan, spokesman for the Jaish al-Thawra rebel group, said that the spread of drugs in Houran falls within the framework of the Assad regime's plans to destroy the younger generations, relying on the Lebanese militia Hezbollah, which transports drugs from Lebanon to the liberated areas.

Hasan told Zaman al-Wasl that through investigations conducted with arrested traders, it was found that the line of cargo went from Lebanon to the Syrian south through regime-controlled areas, with Assad’s security and military checkpoints facilitating passage.

He added that "a large number of smugglers, traders and promoters were arrested and transferred to the House of Justice [Dar al-Adel] in Houran, the only judicial body authorized to prosecute and track down these traders." The spokesman highlighted the determination to fight the phenomenon and to punish those who spread these killing toxins into our society.

The House of Justice has its say

The head of the public prosecution in the House of Justice, Judge Jihad al-Khatib, reported that the court recently destroyed 2.5 million pills, in addition to 100 kilograms of hashish, which was confiscated after the arrest of several cells distributing the narcotics.

The judge said: "The court occasionally conducts arrests of drug dealers in cooperation with rebel factions and the security offices of the revolution,” stressing that "these campaigns had a significant impact in combating this phenomenon."

Khalid continued, saying: "We have developed an ambitious plan to raise awareness and guidance and the rehabilitation of addicts, but we could not implement these measures on a large scale. We also started implementing raising awareness campaigns through preachers in mosques and started cooperation with some psychological support institutions operating in the liberated territories. We also addressed detainees and prisoners with educational classes about the seriousness of drugs and their destructive effects.”

He confirmed that "a law on drugs that criminalizes dealing, promotion, trafficking and smuggling of drugs has been prepared and drafted,” adding that “this law took into consideration the medical needs within strict legal provisions while at the same time imposing severe penalties for those who violate this law."

Khatib pointed out that the fight against drugs is not the responsibility of the House of Justice alone, but it is a participatory and cooperative responsibility for all society’s institutions and sectors.

Journalist Jawad Abou Hamza reported that the campaigns aimed at uprooting this phenomenon are continuing, such as "No to drugs" and "Do not kill yourself. No to drugs," adding that the campaigns started after the Free Syrian Army arrested a drug gang in the village of Maraba east city of Daraa in July of last year.

Abou Hamza, who participates in running one of the campaigns, confirmed that the war against drugs continues to witness fierce clashes between rebel factions and drug dealers. Last August, a drug dealer killed and injured two police in a clash near the town of Naseeb on the border with Jordan.

He said that awareness is constructive for the younger generation, but he saw that "there is no alternative to activating the role of the judiciary more, and increased security against the promoters of these toxins. Syrian youth has become victims of the traders of death in all their forms."

The Al-Iman Rehabilitation Center was established to help addicts recover within the framework of fighting narcotics. The center opened on May 3, 2017 in Al-Tayba, east of Daraa, and was welcomed by the population. According to Al-Iman’s administration, the number of new arrivals to the center has seen a continuous increase.

Hamza al-Huwaidi, an officer at the Al-Iman, said: "The center has been set up to treat victims of drug addiction and to curb the spread of drugs among society.” He added that patients are treated according to the standards of the Physicians Across Continents group.

He pointed out that more than 30 people have been treated at the center since its opening, while the number of visitors is around five a month.

Huwaidi believes that there has been an improvement after the establishment of the center and the voluntarily arrival of patients seeking treatment, adding that the security and military campaigns carried out by some rebel factions in addition to awareness campaigns and seminars held by the center with civil society organizations has also played a positive role.

For his part, Abdullah al-Zoubi, the head of the Tayba Local Council, said that his administration provides the center with services and community police to provide security. He said that patients are addicted to a range of narcotics such as Captagon, cocaine and heroin, as well as opiates.