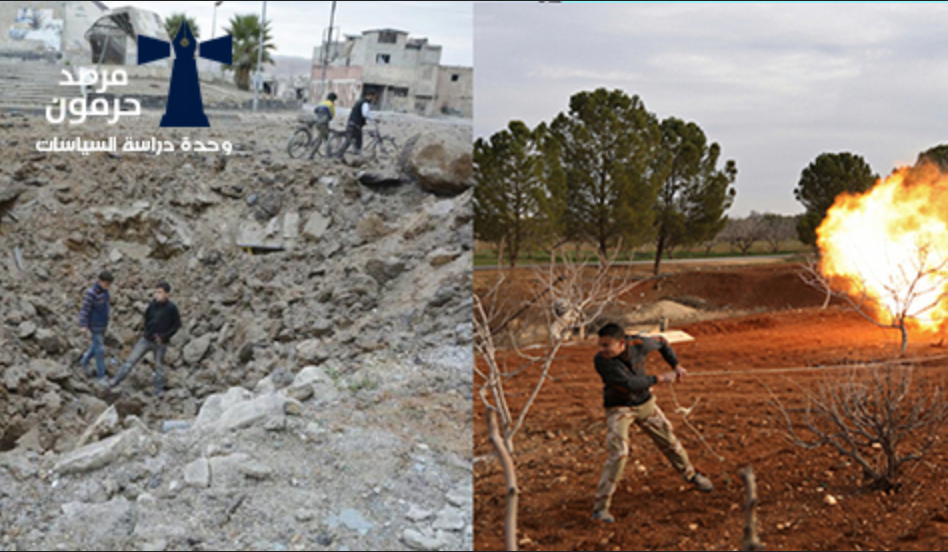 Some 1,982 people died inside Syria in the month January, 33 percent of whom were civilians (652 dead), including 166 children.

Battles and shelling contributed to the deaths of 59 percent of the casualties, with warplanes causing about 34 percent of fatalities and explosives ordinance accounting for about 5 percent (96 dead), most of them in Idleb and Deir-ez-Zor.

Meanwhile, Deir-ez-Zor still tops the provinces in terms of number of deaths, as about a third of the deaths (648) occurred on its territory. However, 90 percent of them were military, distributed between regime soldiers and the militias fighting alongside them, the fighters of the Syrian Democratic Forces, and Islamic State (ISIS) fighters. Victims died in the ongoing fighting to eliminate ISIS in the eastern countryside of Deir-ez-Zor.

Idleb province was the second most violent, with about a quarter of the deaths (481), 60 percent of them military and 40 percent civilians. The increase in deaths is attributed to the war which the regime waged on the southern and eastern countryside of the province. The Damascus countryside ranked third, where 18 percent of deaths (350) occurred, with 63 percent of those civilians, most of them in the Eastern Ghouta. The reason behind the terrifying rate is the continuous land and air bombardment on the cities of the Eastern Ghouta by regime forces.

Elsewhere, the two ignited fronts in Aleppo were responsible for most of the 15 percent of total deaths (294), 66 percent of them military. Fighting is taking place in the southern countryside, which is subjected to an attack by the regime forces, and in the northwest, in the Afrin area, which is subjected to attack by Turkish forces and Free Syrian Army groups fighting alongside them, since Jan. 20.

The issue of deaths takes us to the scene on the ground, and we start with ISIS, as we observe a continuing relative stalemate in the balance of powers in the eastern Deir-ez-Zor countryside. The war is still ongoing against parts of the area that remain under ISIS control, but without notable progress. However, there is progress in other areas in the interests of ISIS, which has returned again to the eastern Hama countryside, the southeastern Idleb countryside and the southern Aleppo countryside. Over the course of about three months, the group took control of more than 80 villages there after it had vanished from the area. We likewise observe a revitalization of the extremist group in the area of Yalda and Al-Hajar al-Aswad south of the capital Damascus. We noted in our previous report the transportation of hundreds of the group’s members into the Hama countryside and to southern Damascus via regime-controlled areas.

A fierce, ongoing battle between regime forces against Islamist groups and Free Syrian Army factions is taking place in the southeastern Idleb countryside and northeastern Hama countryside, with the regime advancing swiftly at the expense of these groups. Hay’at Tahrir al-Sham gave up areas and villages without a fight, resulting in regime forcers taking more than 400 villages and more than 700 being killed, including 140 civilians. Hospitals of eastern Idleb area are all out of service, with the Saraqeb local council declaring a disaster area after it was subjected to dozens of air raids and the use of internationally banned weapons. The most prominent military development in this period was the control of regime forces over the Abu al-Duhur air base, which had been under siege for years.

In the Eastern Ghouta, a fierce assault by regime forces and their allies has continued without pause. A statement by the local council of the city of Douma summarized some of the results of this assault, saying that over the first 20 days of 2018 the regime and its allies had carried out 869 air raids on the towns and cities of the Eastern Ghouta, seven of them with cluster rockets. The Civil Defense said Harasta was hit with 18 rockets carrying napalm. The Civil Defense in the Damascus countryside said 218 civilians were killed in under a month, including 54 children and 35 women. It had announced an agreement to a cease-fire during the Vienna negotiations (the Geneva track) before the Sochi conference, but it did not last, or rather did not start.

Moving to the epicenter of the new military conflict in the Afrin region, Turkish forces and FSA groups allied with them initiated a battle 10 days before the end of the month, with their declared aim to expel the Kurdish People’s Protection Units (YPG) from the area. This came after an undeclared green light from Russian and America forces, whereby Moscow withdrew its forces before the military operation. Meanwhile, Washington said that the scope of its forces and the force it was supporting included the eastern region only and did not include Afrin. FSA forces advanced with the support of Turkish warplanes in some areas amid heavy resistance from the YPG. In the initial death toll, the Syrian Observatory for Human Rights said 42 civilians had been killed, half of them women and children, over nine days of direct fighting.

The direct reason which pushed the Turkish command to enter into the battle was the American decision to train a 30,000-strong Kurdish “border force” to defend the northern and eastern border of the Al-Jazira region which American forces control.

Politically, this month has witnessed two events, first the new round of United Nations negotiations — which occurred in Vienna this time — and the National Dialogue Conference, as the Russians called it, in Sochi. Vienna, as with the Geneva meetings that preceded it, ended without result. The Assad regime is intransigent in its position in limiting the discussions to the issue of terrorism and refuses to talk to the opposition delegation on the justification of the Riyadh 2 statement, which called for a political transition without President Bashar al-Assad.

The outlines of Sochi’s failure began to appear early on, whereby a broad spectrum of political and military opposition and civilian actors and opposition figures inside Syria and abroad agreed to reject the conference and warn about its dimensions and purposes. The High Negotiations Committee refrained from attending, as did the National Coalition and the Coordination Council and all major opposition figures, which led to the weakening of the conference and its failure. Contributing to the disappointment was the American and European position of refusing Russian domination of the Syrian issue and its efforts to capture it outside the Geneva track.

The main outcome of the conference was the formation of a constitutional committee of 150 figures from the regime and opposition, which will be represented through the Turkish delegation (Ahmad Tomeh and his group who refused to leave the airport protesting the Russians not adhering to their promises) with the United Nations appointed to administer the committee, in the custody of U.N. Special Envoy Staffan de Mistura, who announced that this constitutional committee shall become a reality in the Geneva talks.