Strategically placed on the Iraqi border, Iran is eyeing ways to obtain as much property as it can in the eastern province, according to Ayn al-Madina 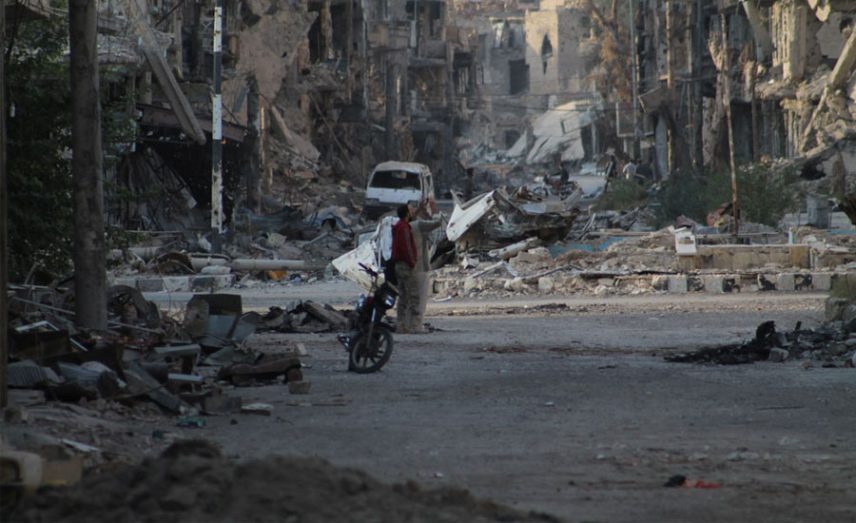 In mid-February, the Assad regime issued Law No. 3 for the year 2018, concerning the removal of rubble from buildings that have been damaged for normal or abnormal reasons, or are subject to laws stipulating their destruction.

The regime has tried through this law, according to a number of its officials' announcements, to lay the legal groundwork for Syria’s reconstruction phase, despite the complications surrounding this issue.

Given the property problem in Deir-ez-Zor province and in light of the current political dispute in the country, where Iran controls several areas in Syria, Deir-ez-Zor has strategic importance on the geopolitical map because it connects areas of Iranian control in Syrian and Iraq.

While Iranian militias control an area south of the Euphrates in Deir-ez-Zor, Iranian officials control a number of regime institutions, to be understood in the context of providing legal cover for Iran’s project in Syria in general, including in Deir-ez-Zor, which aims to reshape the region politically, socially and culturally.

Part of the occupied residential areas in Deir-ez-Zor province is owned by the municipality, and another is made up of individuals' holdings, as it is entered into the administrative system as state land in the province’s cities.

Lawyers say that the "emiri land" (state land) in Syria is still subject to Ottoman law for state property transfers. The civil code says that state properties are those which are owned by the state and the right of disposal may be exercised upon them. In Syrian courts, holdings are treated like land of the owner.

Holders can rent and sell the right of disposal to other individuals, but this buying, selling and renting is not recorded in the property registry. It is arranged through contracts certified by the public notary and then is not subject to real estate categorization. This includes residential buildings built on land owned by the municipality, however a decision to reverse this was issued in 2010 and is yet to be implemented.

In light of the new situation, the complications of the property problem have increased, as a not small number of property owners have lost papers proving their ownership, whether registered in the property registry or confirmed with the public notary.

In addition, property registries and documents of the relevant institutions have been lost, such as with the municipality and public notary, which, as recently rumored, will make it hard to prove the identity of the property owner.

Despite the law issued allowing for relatives of four degrees distance to prove property ownership, the regime’s control of the area south of the Euphrates will impede the return of opposition members, while the poor security situation will hinder the return of another segment of citizens.

So for those who cannot return it will be difficult to achieve this condition, which will make it easier for regime authorities and Iran’s local arms to sell or buy the property.

A number of real estate specialists say that the Assad regime, through this law, could end the residents' right of usufruct and possession if they cannot prove their ownership in accordance with the law for political and security reasons, thereby nullifying their legal right to demand their rights later. The specialists say that the regime will pave the way for this by issuing other laws later.

In addition, further complexity is added by the intervention of successive authorities across the province in the property issue, especially the Islamic State (ISIS) organization, which adjudicated a number of property issues related to land ownership and disputed property that were concluded before the revolution, giving the property back to previous owners who had sold it to the new ones.

There is also the issue of many properties in areas outside regime control being sold without legal documentation, which makes them essentially disputed properties, as well as pro-regime militias taking control of properties from members of the opposition and civilians who left the province.

There have been reports about Iranian companies beginning to buy and sell property through local intermediaries.

Despite the lack of clarity of details of these operations, the appointment of Abdel Majid al-Kawakabi — a former official for the coordination office of the Lebanese group Hezbollah in Aleppo — as governor of Deir-ez-Zor, has stirred fears this may occur through manipulation of the implementation of Law No. 3, which says in its articles, including articles 4 and 2, that the governor is the one who specifies the damaged real estate and building areas in the administrative unit, and that he is the one who forms a committee for classifying damaged buildings and proving their ownership and the ownership of private possessions and rubble.

This would make it easy to pass some decrees and to speed up the issuance of documents for buying and selling in favor of Iran’s plan.

The Assad regime and Iran’s targeting of Deir-ez-Zor goes back to 2014, when a large number of the Al-Shairat tribe were displaced to Palmyra city as a result of a massacre carried out by ISIS.

The regime exploited the issuance of personal “loss compensation” cards to a number of Al-Shairat members, giving Syrian identity cards to Afghan members of the Fatimioun brigade who are deployed today in the province.

What is happening today is the completion of this project, without any consideration for the social implications which will enter the region into violent sectarian conflict.