A Syrian government official tells al-Watan that the rights of citizens in the Ghouta will be protected. 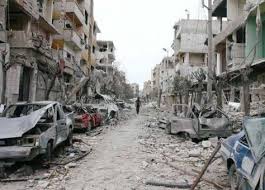 The attorney general for the Damascus countryside Mohamed al-Hamoud said that the judicial documents in Al-Nashabiyeh were missing and were currently being searched for, while judicial files in Kafr Batna had been found but were dispersed and would today be collected, categorized and sorted. In statements to Al-Watan, Hamoud said that all judicial documents had been found in Harasta, adding that they had been preserved in a storehouse until militants left the area.

Hamoud added: The situation with regards to judicial documents is going well, while searches are underway for missing ones. He said that the rights of citizens would be protected. He said that it was not currently possible to give a ratio or number of missing files as the search was still underway.

Hamoud said that courts of these areas did not stop working but that they had been transferred to other safe areas, adding that there was no timetable for their return to their original areas yet.

Hamoud added: We will activate the courts in these areas as soon as the state institutions enter. He added that he did a tour yesterday to survey the situation of these courts with regards to work to activate them.

Hamoud added that the countryside’s department of justice was ready to receive any citizen who was a resident of the Ghouta to facilitate their affairs whether jurisdictional such as divorce and marriage or other matters, such as civil or criminal, especially given that the courts of these areas are still working and receiving citizens of these areas.

In Mliha the court building was heavily burned and subjected to major damage and therefore it needed work before it could be put into use, and that this also went for state institutions in the area, Hamoud indicated.

With regards to the sale transactions which took place in these areas, Hamoud said that the law was clear and that citizens should consult the judiciary in these cases and deal with the issue according to the legal procedures.

Hamoud said that there was no fear of pressure on the courts as the judicial team was ready for these matters and was working even during official holidays to facilitate the affairs of citizens and to protect their rights.

Hamoud said that during the coming days the issue of the missing files would become clear as the search was still ongoing, especially with regards to the notary public files.