Some of Damascus' most prominent buildings have been lit up for the cause, SANA reports 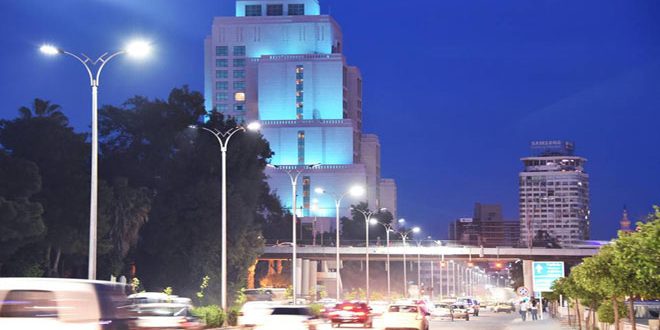 Some of the capital city of Damascus' main buildings were lit up with blue lights in support of Autism Awareness Day.

The event is a part of the “Damascus Colored With Hope” campaign, which was launched on the occasion of the International Day for Awareness of Autism by the Syrian Organization for the Disabled (AAMAL).

The campaign will also include recreational activities and workshops on early detection of autism.

Al-Hejaz Railway Station, Damascus Citadel, Dar al-Assad for Culture and Arts, AMAAL’s headquarters, the Radio and Television Corporation building, the Four Seasons Hotel and Dama Rose Hotel were lit up with blue lights on Monday on the occasion, according to an AAMAL statement.

This lighting will continue until April 9 to spread hope, solidarity and awareness of the disorder.

One in 86 children are reported to have autism around the world each year.

The next week, according to the statement, will witness the launching of “ The World in Their Eyes” event, which includes a short film show in Al-Buraq stores, which details the daily life of autistic children aiming at increasing the ability to understand the disorder and absorb the children with autism.

Workshops on early detection of autism, in cooperation with the Ministry of Health, will be set up on April 10-11, in addition to launching the hashtag of “Damascus-colored-with-hope” in solidarity with persons with autism.

AAMAL is a non-profit local organization that was established in 2002 to improve the lives of disabled persons through building knowledge and awareness, providing treatment and rehabilitation, and integrating them actively in society.

On April 2, the world celebrates the International Day for Awareness of Autism in order to shed light on this disorder and its indicators. The United Nations has called on this year for empowering women and girls with autism, as well as defending their rights and strengthening the fight against the discrimination they are subjected to.