Schools and universities are being swept up in competing political programs, My Grapefruit reports 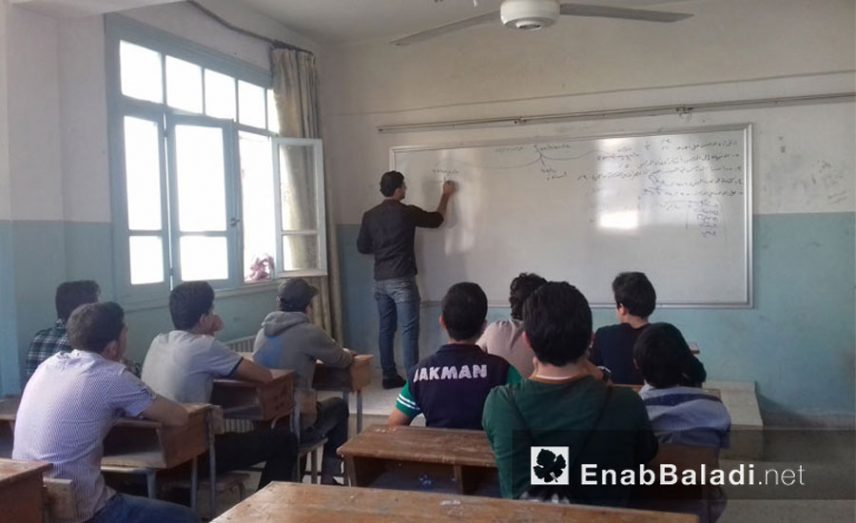 The fluctuation of the political situation in Idleb has reflected on different sectors of life in the governorate. Education has been one of the most affected, with the existence of three ministries of education, each seeking to tighten its grip on schools, universities and all educational institutions with their students and cadres.

Education in Idleb is fractured between three governments: the pro-Nusra "Syrian Salvation Government," the "Interim Government" and the government of the regime, creating several problems. The biggest of them is the absence of a unified educational curriculum and the absence of a formal authority that is responsible of payment and supervision.

Although the Syrian Interim Government has gone a long way toward organizing educations in areas beyond the control of the regime, facing challenges in scarcity of funding and paying staff salaries on time, a large number of schools in Idleb remain affiliated with the regime’s government and receive their salaries from the regime’s Ministry of Education.

As for the Syrian Salvation Government, which was formed in November 2017, it has not acquired the legitimacy to lead the education process so far. It has merely adopted an initiative and held two conferences attended by those close to the initiators of the initiative, but it has imposed itself, appointed its ministers and begun to take control of the region administratively, serviced fully under military control.

The Salvation Government is accused of being backed by Hay’at Tahrir al-Sham (the Nusra Front) and is trying to pull the rug from underneath the Etilaf Interim Government. The Aleppo Free University has been witnessing a conflict between the two governments when the Salvation Government attempted to take over the university by appointing Dr. Ibrahim al-Hamoud as president of the college instead of Yasin Khalifa, who is still in charge.

Since December, protests and sit-ins have been held by students, refusing to accept the Salvation Government's takeover of the university.

Despite this dispersion, all educational institutions are teaching the amended Syrian curriculum by deleting the subject of Baathism and symbols of the Syrian regime and its ideas, keeping scientific materials and information, while the source of the certificate varies according to the subordination of the school administration.

Teachers of the Idleb Free Education Directorate complain about the lack of support given to them for their work. They give themselves the greatness, humanity and nobility they offer to a generation that is threatened with loss if it does not have suitable educational conditions.