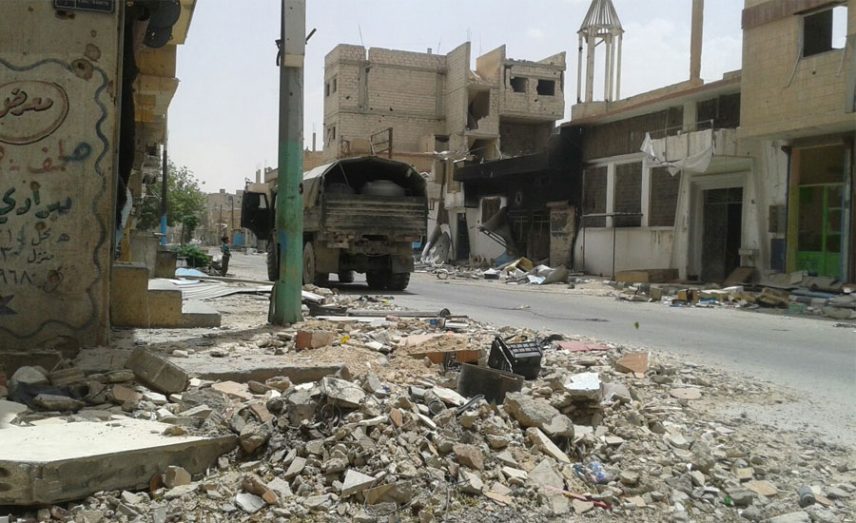 No sooner had the Syrian regime and Shia foreign militias, with Russian air support, taken over the city of Palmyra east of Homs than militia members proceeded to loot the city’s houses that were still vacant of residents and share silent power with the official forces there.

Since they took control of the city in March 2017, Syrian regime forces have proceeded to loots its homes while preventing its residents from returning, whether they are pro-regime or pro-opposition, in what seems to be a response to orders from its Iranian allies, who have worked since entering the city to settle the families of its militias in civilian homes and take over some military bases for its fighters.

Meanwhile, the Russians have been content to place a number of their generals and soldiers as observers over the activities of the regime and the Iranians who are present in force there, especially given that the area is rich with resources such as phosphates and oil, in addition to the city’s geographic and historical significance.

Abdullah Abdel Karim, director of the Al-Badiya Network 24, which is concerned with covering news in the Syrian Badiya (desert) area says that the forces currently in control of Palmyra city are local and foreign militias with different loyalties, spread between regime forces, such as the Hasan al-Watan and National Defense forces, and others whose numbers are many times higher than those of their counterparts, who have highly religious Shia ideologies and take their orders directly from the Iranian Revolutionary Guard command in Syria.

These are the Iraqi Hashad al-Shaabi militia, Abu al-Fadal al-Abbas, the Iraqi Islamic Resistance, Iraqi Hezbollah, the Afghan Fatimioun and the Iranian Al-Zeinabioun.

The fighters of these militias have taken the houses of civilians inside the northern and western districts of the city of Palmyra according to Abdel Karim.

The number of Russian forces inside Palmyra does not exceed 300, including generals, soldiers and Ukrainian mercenaries working for the Wagner security group with the aim of curbing Iranian influence and limiting it to the city and its natural resources facilities.

Abdel Karim explains: “Despite the low number of Russian forces compared with their Iranian allies, they are the decision makers in everything in the area.”

The number of residents of Palmyra city at the start of 2011 was about 110,000, according to the regime government census.

With the eruption of the Syrian revolution, the residents of Palmyra, like other Syrians, had a role in that peaceful mobilization and then were repressed by the regime's military machine, and the rebels left the city.

It came under the control of regime forces and their security branches until mid-March 2015, when the Islamic State (ISIS) carried out its first battle to take control of Palmyra, which ended with regime forces withdrawing and leaving civilians alone to face ISIS while warplanes continued bombing at random.

This forced most residents to leave. The Syrian regime's forces, backed by allied militias, regained the city for the first time in mid-2016, with ISIS then briefly taking it over again.