Humanitarian conditions are deteriorating rapidly as the displaced are caught in limbo, Al-Hal reports 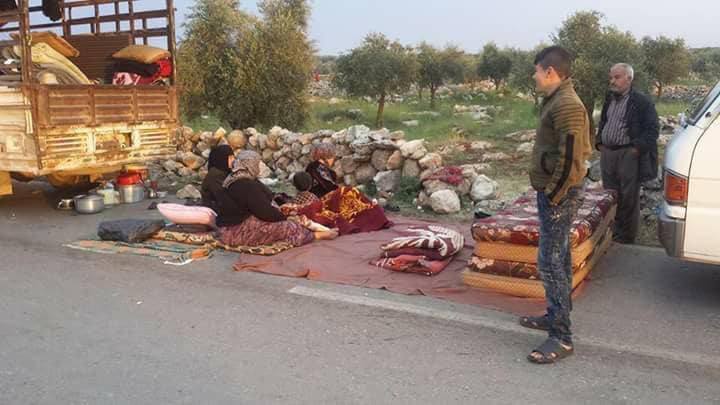 Thousands of displaced people from the town of Afrin, stranded at the Qimar checkpoint, have been facing difficult humanitarian conditions for about a week.

According to a civilian source from the region, "Thousands of people displaced from the city of Afrin, after the Turkish army and opposition groups took control, are stuck at the Qimar village checkpoint and are waiting for the factions to allow them to return to Afrin city."

"Dozens of vehicles carrying IDPs [internally displaced people] from Afrin have been waiting to cross the checkpoint for seven days," said Sulaiman Shekho, a resident of the area. "The displaced people are taking shelter on the land, suffering from the loss of food and drinking water. In addition, some babies and newborns' condition has worsened because of the difficulty of providing care and securing their supplies."

Meanwhile, activists and journalists on social networking sites launched distress calls to provide assistance to the displaced as soon as possible, and to provide the necessary supplies of water, food and medicine.

Sources close to the Kurdish Self-Administration have confirmed "the administration's quest to establish a new camp in the region which may accommodate a few thousand of the displaced, who are between 250,000 and 300,000 and are distributed in the areas of Al-Mashba, the villages in the province and the towns of Nabal and Zahra," Shekho said.