SDF efforts to keep control of the northern city are in doubt, Ayn al-Madina reports 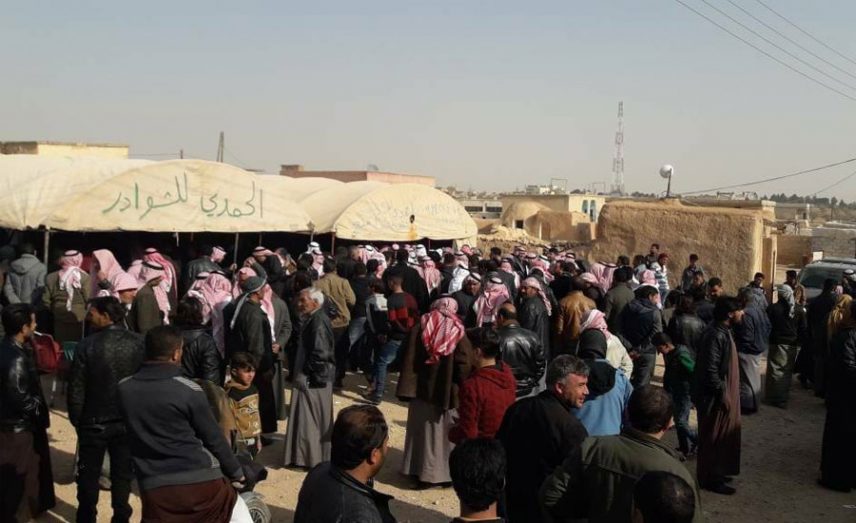 Like a hive of bees, officers of the international coalition in the city of Manbij are working to empower their control and the control of their allies, the Syrian Democratic Forces (SDF), on the majority Arab city, which has become the focus of events in recent weeks.

Four officers accompanied by more than 12 members of the American special forces and an SDF group toured Manbji and its countryside to visit homes of tribal sheikhs in order to influence the tribes in their favor in light of talk of an upcoming attack by the Turkish army and the Free Syrian Army on the city.

The intensified tours of the coalition officers, and previously American officials, in Manbij and its countryside have not yet born fruit apart from loose promises from the sheikhs of the tribes, most of whose members are in FSA coalitions in northern Aleppo, specifically Jarablus and its countryside in the area which has become known as the Euphrates Shield.

The tribal sheikhs and their centers of influence are concentrated south and east of Manbij, where the Al-Bowabna and Al-Damalkha tribes are concentrated and to the north where Albu Sultan, Ql-Bani Adeed and Bani Saeed are, with the same names in the city where the tribes still have a pivotal role determining its fate within any transitional process. The tribe is the local administration for the whole area in in light of the absence of the rule of law and state.

Since the SDF took control of the city with support from the international coalition, the tribes have seemed to play a bigger role in confronting the repeated attempts of the SDF — and behind it the Democratic Union Party — to take full control over the city’s institutions and isolate it from its Arab environs, whereby it has attempted to include it in the Euphrates region of the Self-Administration as a part of the intended federation of northeast Syria.

The role of the tribes in this regard revolves around imposing a different reality which the SDF did not plan for the region. It has worked to form groups under its authority within the SDF, through which it can be said that it has been able to impose its aims. It has also prevented the SDF'S attempts to conscript women into military camps through democratic slogans and otherwise, and has worked to control this as a conservative society.

The tribes have also worked secretly to organize themselves as entities able to undermine SDF rule, with the evidence of that being the mass demonstrations and major strikes in the city and the calls for accountability for killings, as well as demands to expel the SDF from the city and hand over its administration to Arabs and the tribes, after two young men were killed under torture by SDF intelligence at the beginning of the year.

The tribes impose their say

The tribes’ uprising began after a number of actions, most notably compulsory conscription and the killing of two young men after they were imprisoned, as well as an attempt to blur the Arab character of the city by giving PYD people control over most of the city’s institutions.

A recurring point in the history of Manbij and its tribes since the beginning of the Syrian revolution until now was the peaceful demonstrations against the forces that had controlled it — under FSA control, residents protested in order to clear the schools of the rebel groups’ bases, and at the time they were able to open a number of schools to educate their children.

With Manbij moving under Islamic State (ISIS) control, the challenge was bigger for the city’s residents. However, they confronted an encyclopedia of horror and fear, which ISIS issued to the world, with flying demonstrations in the city rejecting the killing and arbitrary executions against civilians under various pretexts and excuses. The protests have continued since the SDF took control of Manbij after a “phony war” as the people of the city describe it. The city which the FSA, ISIS and most recently the SDF have rotated control over was and still is holding peaceful protests while awaiting a future that does not seem clear.

Going back to the role of the tribes in the mobilization that has occurred in the city since the start of the Syrian revolution, it can be described as a vacillating role. Most tribal leaders were previously enjoying support from the Assad regime or, more accurately, they were under their authority through benefit that were given them, especially presence in the parliament and some other forms.

The tribe and the revolution

With the beginning of the revolution, some tribal sheikhs played the role of shabiha or the role of spectator in the repression of the protests. However, as soon as the city was liberated from Assad regime control and thousands of people joined the protests, many tribal leaders were forced to flee to Aleppo and other areas.

The major participation of tribal members in the revolution and then their joining the ranks of the FSA created a major upheaval for the tribal system. Tribal sheikhs and notables were exchanged for others who supported the revolution and offered a great deal of support, but that did not last long. During 2014 and the time ISIS controlled the city, the character of the tribes was changed once again and their members fled to Turkey and to the north.

The ISIS group within its religious propaganda media strategy and its policy of enticing to power, attracted a number of tribal sheikhs in Manbij and its countryside, however the group’s decisions and behaviors pushed the tribes away from any role in supporting it in the region, and the tribal sheikhs and notables’ participation would be limited to periodic meetings, as a way of avoiding the group’s oppression and out of fear of its punishments.

Today, it can be said that the SDF does not have any popular base in Manbij city. Manbij society supports the entry of the FSA, while some tribal sheikhs support the return of the Assad regime. They agree in rejecting the SDF presence in Manbij, however the future that surrounds their city inspires everyone’s fear.