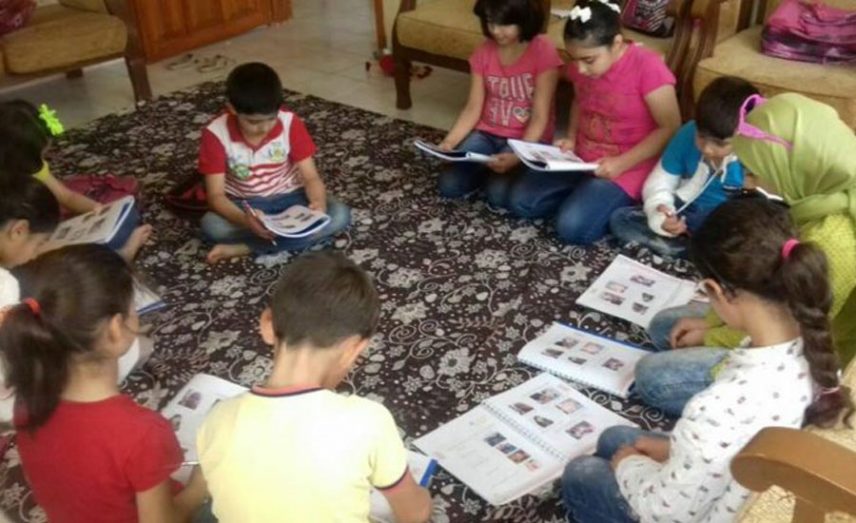 The Athar Organization for Education and Development has launched a “Homeschooling” project which aims to end children dropping out of school as a result of the ongoing conditions in the blockaded northern Homs countryside. Many schools have been destroyed and some parents are not sending their children to schools out of fear of bombardment.

The project has set up training sessions for women in the al-Houla area of the Homs countryside. The aim is to provide training for mothers so they can qualify as teachers and take on the responsibility of educating children who have dropped out of school. In exchange for providing education, each teacher will receive incentives and money from the organization.

The director of the project at the Athar Organization, Wafaa Rawan, told Souriatna: “The project aims to get women qualified and to supply them with the necessary skills to revive the educational situation in the Houla area, which has seen students dropout and damage inflicted on educational facilities during military operations on the area, in addition to providing 100 women in the region with work opportunities.”

The Homeschooling project is comprised of two sections — the first aims to train women and to improve their educational skills with a two month course. The second section sees the now qualified women, providing education for 1,500 children in the Homs countryside who have dropped out of school.

Many women have applied to join these sessions and the Athar Organization has formed a council to study the applications. The council is composed of organization members, the local council in Houla, and the Free Education Directorate in the Homs countryside.

Around 700 women applied, and 100 were accepted. They were selected according to criteria and conditions, including that the women be the breadwinner for their families, not currently working and have at least a secondary degree.

Wafaa added: “The training courses offer information on the teaching curriculum, as well as life skills, protection, interaction and vocal communication and its importance to the child,” adding that “interactive education aims to generate creative ideas for the children and motivate them to learn.”

The head of the Houla local council, Osama Jokhdar said: “Every women will teach 15 children aged 14 years or younger and who are within a 500 square meter area of them. Two categories of education were adopted: The first includes educational material from first grade to third, and the second comprises of material from the fourth to the sixth grade.”

The UNICEF curriculums for emergency cases was also adopted. The schooling will last five months during which time school materials will be provided for the women and children with the aim of giving them the greatest access to academic benefits.

Man Mohamed, one of the trainees, said: “I’m currently on a training course with the other women and later I’ll teach a group of children in my area in exchange for a salary from the organization. This way I was able to secure a source of income while at the same time participating in the education of children.”

The Athar group announced at the start of March the end of the “Homeschooling” project in the Turkish city of Gaziantep which had lasted for five months and educated 200 Syrian children living around Gaziantep in cooperation with the Midad Foundation.