While under siege in Ghouta, Um Sameeh would serve 200 meals a day, writes Ain al-Medina 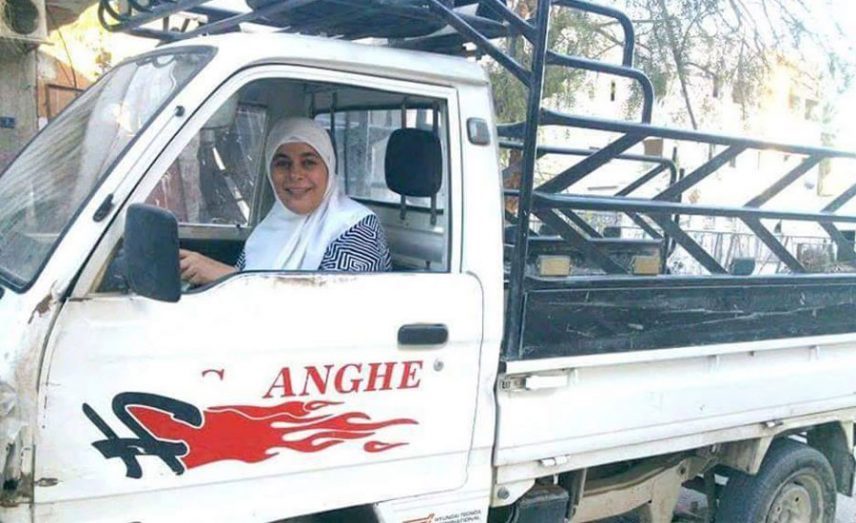 After years of working hard and under siege in Ghouta, Umm Sameeh fled from her kitchen, with other Syrians who were displaced, to the northern city of al-Atarib.

In Ghouta, Umm Sameeh dedicated her life to her work. As is usual for those who have the spirit of the revolution, she did not appear on media except on rare occasions. Her work spoke for her and made rich material for the many writers who discussed her, without ever seeing her. Since arriving in al-Atarib, she has rolled up her sleeves to finish the work she started.

Umm Sameeh also refused to speak with all media organisations who contacted her, as she is now, as always, working, and has no time in her life to talk.

Umm Sameeh summed up the concept of struggle when she rejected her nomination for the Arab Woman Award, responding: “I want to feed people and save them from death. What do awards mean? Is this revolution about awards?”

Everyone in Ghouta knows Umm Sameeh. All children, families and poor people know the smiling face of this Palestinian woman, who has believed in the Syrian revolution since it began and has been arrested by Syrian security forces three times.

In April 2013 security forces also arrested her son, Sameeh Bahra, a medical student who was helping the wounded and securing medicine and assistance during protests. Umm Sameeh was left with the memory of his dream of one day becoming a neurosurgeon.

In 2014 she started “The People of Suweida’s Kitchen to Assist the People of Harasta,” which then became the One Hand Foundation.

Umm Sameeh oversees all aspects of this project, and she is the only woman among a staff of men whose respect and trust she has been able to gain. The foundation’s work has grown and now distributes food to hundreds of families beyond the Harasta region and has reached other areas in eastern Ghouta.

Umm Sameeh would ride alone on a Suzuki, moving among the rubble and checkpoints to delight a child with a meal or a gift. The foundation has taken care of nearly 160 orphans, in addition to organizing smaller projects for the residents of Ghouta. In spite of the siege conditions, Umm Sameeh remained, continuing with her most valued mission of helping children who have been deprived of their childhood and are bearing the burden of the siege after the Assad war machine turned them into orphans and in the best cases into men before their time.

Umm Sameeh bade farewell to Ghouta on Mar. 22, 2018, serving her “last plate,” as she called it, in a voice soaked in tears and vowing to return.

Umm Sameeh does not own a house in al-Atarib and she lives on the move, continuing the work she started in Ghouta. She started her new kitchen just two days after arriving. She was assisted by the development center and some volunteers in buying kitchen equipment and distributing the food which the people of Ghouta had tasted for years. She had been serving 200 meals a day — in addition to the distribution of bread and vegetables, adopting orphans and supporting small projects.

In the presence of Umm Sameeh, we are all ashamed and proud at the same time. She is a Palestinian who has struggled all her life, and stood with those who were blockaded and displaced, indifferent to exhaustion, arrest and hunger. She may have wanted to tell us that the central issue lies in this moral position against tyranny and oppression wherever it exists. We must finish the journey so that we do not taste bitterness and become paralyzed with inability. We must survive and try to cling to victory for the revolution — and for life.