To the delight of residents, storytelling is being kept alive in cafes in Damascus writes SANA 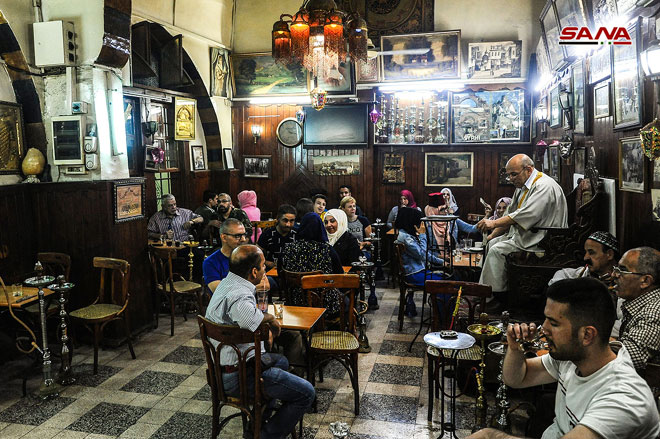 Storytellers (al-Hakawati) and poetry recital have a long history in Damascus. This type of performing art was part of its culture and its cafes long ago.

It was very popular and part of Damascene entertainment, deepening moral values and showing exemplary behavior through the stories of heroes in folklore.

Despite the fact that the phenomenon of al-Hakawati has declined in the daily life of Damascenes, some people are still keen to visit some of the cafes that have preserved this heritage as a hangover from the past.

This month, al-Hakawati is part of Ramadan. At night, al-Nofara, the 500-year-old café located in the old city of Damascus, will be keeping this tradition alive.

Abu-Sami is a Syrian storyteller. He performs at al-Nofara cafe. He sits in the center of the café and wears his traditional Damascene clothes with a small sword in his hand to thrill his listeners.

Most of his stories often feature historical or fantasy characters and events; stories of people doing good deeds where reality is mixed with fiction.

Abu Sami told SANA’s correspondent proudly that not anyone could be a storyteller; it requires rhetoric, fluency, narrative skills, and the ability to capture the audience’s attention and engage them through the process of narrating the story.

A number of customers in the café asserted that al-Hakawati has its own spirit and distinct amusement they couldn’t find on social media.

According to them, the era of TV and social media doesn’t reflect the beauty and the grandeur of the past and al-Hakawati tells his story with relish in a way that mirrors the heritage of the past.