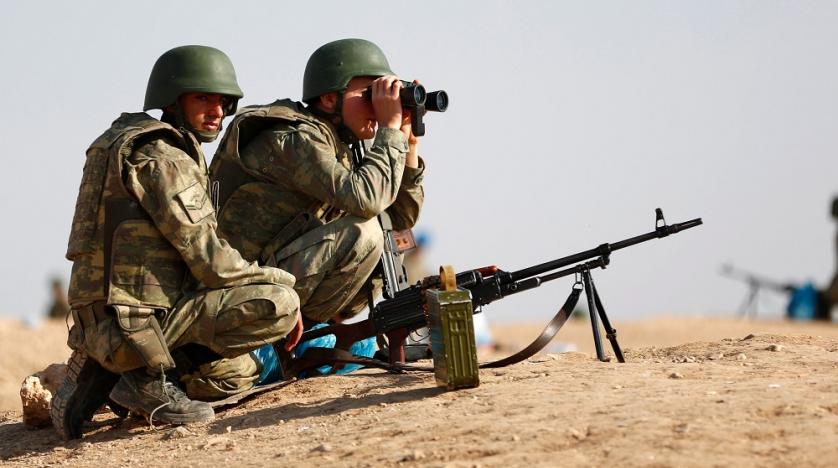 The influential foreign players wield in Syria is taking shape in agreements and intense contacts to secure their interests in the country.

A series of negotiations have been held between the Russian and Israeli militaries over the de-escalation zone in the southwest and how to keep Iran away from Israel’s border.

In the northwest, the Turkish army began deploying military patrols in the Manbij countryside near areas held by the Syrian Democratic Forces (SDF) as part of a roadmap reached with the United States on June 4.

Tens of kilometers away, Turkish forces and Syrian opposition factions are preparing to enter Tall Rifaat city to replace Syrian regime forces and Iranian militias in line with a Turkish-Russian agreement.

Amid these negotiations, a mysterious air strike targeted the Iraqi Iran-backed Popular Mobilization Forces in the Deir Ezzour region on Monday. No one has claimed responsibility for the attack, with regime fingers pointed at Israel, which normally does not comment on such strikes.

In the southwest, the Syrian Observatory for Human Rights reported air raids on an opposition held region in Daraa ahead of an impending regime offensive. The retaliation came on Tuesday when opposition groups shelled the Sweida region for the first time since 2015. The US had earlier this week expressed its concern over the regime’s imminent offensive in the southwest in an area that is within a de-escalation zone, warning that it will take the appropriate response against the violations there.

These warnings and regime reinforcements coincided with talks between Israel and Russia over southern Syria, revealed information obtained by Asharq Al-Awsat. They focused on the withdrawal of “Hezbollah” and Iran-backed militias to between 20 and 25 kilometers from the disengagement line in the Israeli-occupied Golan Heights. Regime forces would be deployed in their place along with Russian military police patrols. Some 12,000 opposition members and their families would be relocated to Idlib.

Israel, however, demanded in the latest talks with Russia for Iran to withdraw 80 kms from the Golan, meaning beyond Damascus. Israel also demanded that it have free rein, without any Russian objection, to strike any side that violates this deal.

In the north, the American military reinforced its presence in the Tabaqa airport in SDF-controlled regions. The facility is one of the most important military airports in Syria and the international coalition combating ISIS had sought to seize control of it before the regime or Russia could lay their hands on it.

The reinforcements contradicted US President Donald Trump’s decision to withdraw American troops from northern Syria. Military commanders and his allies in Europe and the Middle East convinced him to postpone this move. American presence in Syria is now linked to completely eliminating ISIS, reducing Iran’s influence and achieving peace based on the Geneva talks.

The recent deal on Manbij between Washington and Ankara and the control by Turkey-backed Syrian opposition factions of Afrin has prompted the Kurdish People’s Protection Units (YPG) to postpone its battle to eliminate ISIS from the Syrian-Iraqi border, despite the advances it made over the past two days.

Given Trump’s wavering over the withdrawal from Syria, developments on the ground may push the SDF towards striking a deal with the regime. Threats from Damascus, mysterious assassinations east of the Euphrates River and the emergence of regime- and Tehran-backed anti-US armed groups have prompted the SDF and its political wing to adopt a more open approach towards the regime. It may opt for negotiations to reach political, military and economic deals with the regime that would secure Kurdish rights.

Also in the north, the pro-Iranian Revolutionary Guards Tasnim news agency spoke of an “unprecedented” agreement that would call for handing Tall Rifaat city to Turkey. This marks the beginning of a new phase of cooperation between Ankara and Moscow, it added. The agreement would call for Turkish forces to officially enter the town and manage its affairs. Currently, the city is controlled by the pro-regime forces. Tasnim said that Russia vowed to remove Iranian and pro-regime forces from Tall Rifaat to replace them with members of the Free Syrian Army.

The Russian military had previously set up a center for itself in Tall Rifaat, in a repeat of other deals that have been struck between Ankara and Moscow, such as the one over Afrin. Notably, the Tall Rifaat deal was disclosed shortly after Turkey and the US reached their Manbij roadmap.

Glaring from all these international moves, is the absence of the Syrians themselves, whether the regime or opposition, in determining their own fate. These developments have been taking place separately from efforts to form a constitutional council. Western diplomatic experts predicted that this discrepancy on the ground and political levels will continue until shortly before the 2021 presidential and parliamentary elections. Only then will the foreign influence on the ground be translated into the articles of the new Syrian constitution.

The external hard drive had been smuggled from Syrian regime territory through extremist-held towns and into Turkey. When Ghazwan Koronful finally got his hands on it, he sighed in relief.

Loaded onto the disk were pictures of thousands of title deeds from towns in central Syria recently recaptured by regume troops and largely emptied of their residents.

Fearing Syria's regime would expropriate abandoned properties or tamper with deeds, a network of activists and lawyers set their covert plan into motion, said an Agence France Presse report on Wednesday.

"It was our most complex operation yet," said Koronful, a 65-year-old Syrian lawyer who heads the network from Turkey, where he has lived in exile since 2012.

They enter town registries, photograph the documents, carefully log and organize them, then smuggle the hard drives across Syria's sealed northern border into Turkey.

Among them are up to 450,000 land-related documents from northern and central Syria — title deeds, contracts, and other papers that displaced Syrians could use to prove property ownership.

These documents are crucial now, Koronful explained, as the regime passes a series of laws that rights defenders fear may unfairly dispossess Syrians from their homes.

"Our work simultaneously protects against hostilities that could damage the deeds, and against the regime's attempts through these new laws to tamper with people's properties," he told AFP.

"Those files represent the hope of return."

FSL sprang into action after Homs city's registry was destroyed in a fire in 2013, which activists suspected was a regime bid to strip oppositionists of their land.

Smuggling out original deeds from other towns was risky and could be considered tampering, so the FSL's 15 lawyers opted for the next best thing: digital copies.

With help from civil society group The Day After, they traveled to Turkey to learn how to handle, photograph and archive documents.

Back in Syria, they began working through abandoned registries in northern rebel towns: Harem, Azaz, Saraqeb.

"We set up a little studio in the room with the most light," said an FSL lawyer still in Syria who identified himself as Samer.

Each month, they emptied their computers onto external drives which they sent to Koronful in Turkey.

They raced against air strikes that damaged cameras and wounded staff members, worrying registries would be bombed to pieces before they could finish.

"When we reached the last page, we'd be so happy to be finished. Whatever happens now, if we get bombed, we have a drive with everything on it," said Samer.

Sometimes they lost the race. In 2013, days before FSL was to begin photographing deeds in the northern town of Al-Bab, the ISIS group swept in and destroyed the registry, Koronful said.

They now struggle to get permission to enter registries from suspicious rebels, especially in Idlib, occasionally photographing in secret.

Since Syria's war erupted in 2011, more than six million people have been internally displaced and another five million have fled the country.

More than 920,000 have been displaced this year alone, the UN said, the fastest rate yet in the seven-year war.

A vast majority leave behind property-related papers, the Norwegian Refugee Council found in polls last year, according to AFP.

That puts them at risk of losing access to their land through decrees like Law 10, which allows for property expropriation for urban development.

A set of laws allows for missing titles to be restituted using digital copies, but it remains unclear if the regime would accept a version produced by opposition-affiliated lawyers.

"We're expecting a lot of people to ask for copies," said The Day After's Amr Shannan, pointing to similar post-conflict property disputes in Lebanon and Bosnia as precedents.

For now, the digital titles remain tucked away on a pair of hard drives, one in Turkey and another in an undisclosed European city. They aren't yet searchable, but are archived in the same order as the originals.

"If there's going to be a return of refugees, one of the most important factors is that they have homes or land to return to," said Shannan.