As operations in Daraa near their end, Idleb ponders its future writes Souriatna 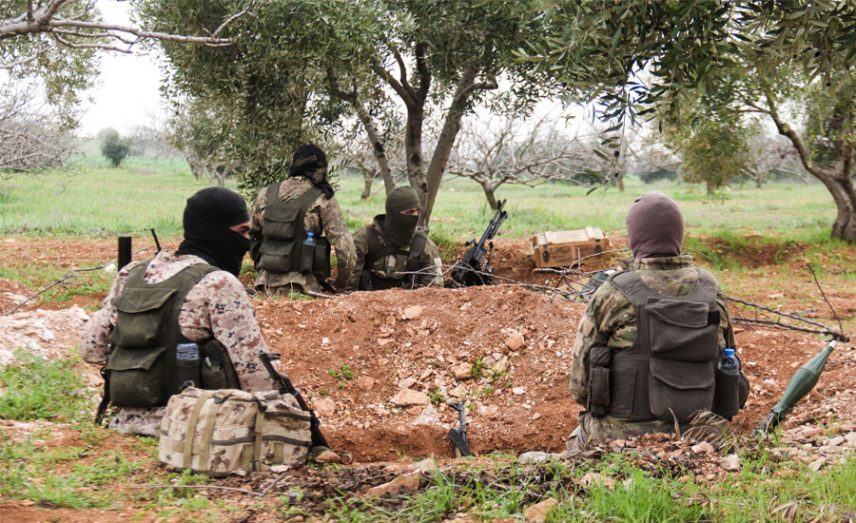 As the Assad regime moved closer to complete control over southern Syria, questions began to emerge around the extent of the regime and Russia’s seriousness in opening a major military action to take control over Idleb province — the last stronghold of the Syrian opposition — or whether the presence of Turkish monitoring points would prevent this. Meanwhile, there have been fears over the fate of the three million residents and displaced people currently in the north.

The Syrian regime recently has begun to promote the battle for Idleb, with the regime head Bashar al-Assad announcing in May that they would regain control over ever point in Syria, including Idleb. He said that they would first try to retake Idleb through “reconciliations and settlements,” and, if that failed, then they would resort to military action and an escalation of violence.

Following the completion of the deployment of Turkish monitoring points and talk about a total ceasefire between the regime and the opposition, regime helicopters dropped pamphlets on various areas in the Idleb countryside, which included threats against rebel groups and residents, telling them to lay down their arms and head towards “reconciliation” with the regime.

Assad’s warnings about the approaching battle for Idleb sparked fears among residents and those who have been displaced to the north. They began to question the possibility that a military action could actually occur, especially given that Idleb has become their final safe haven after the regime took control of other parts of Syria.

The spokesman for al-Ashair al-Suriya (Syrian Tribes), Mudar Hamad al-Asa’ad, told Souriatna: “Idleb is completely different from the other areas which the regime has invaded, especially given the presence of Turkish observation points. Therefore, military action by the regime would result it in colliding with Turkish forces, which Assad does not want. They do not have the military capacity to open any front without Russian air support, and for him to take military steps would have to be in agreement with Russia. As long as Russia adheres to the international agreement with Turkey in accordance with Astana, Assad will not dare to stray outside Russia’s will.”

Military analyst Col. Ahmed Hamada said it was unlikely that the regime would attack Idleb given that it was under a “de-escalation” zone agreement, which differed from those in Daraa. Turkey has economic and strategic interests in Idleb, and has deployed 12 observation points to prevent any military action towards it. A few months ago, these observation points prevented Assad from advancing in the Tel al-Touqan area from the Abou al-Dahour airbase toward Saraqeb.

On Saturday, Turkish President, Recep Tayyip Erdogan, informed his Russian counterpart, Vladimir Putin, that the efforts to contain the conflict in Syria would collapse if the Assad regime attacked Idleb and targeted civilians there as it did in Daraa.

The journalist Firas al-Allawi said: “Once the Assad regime has finished taking control of Daraa, it has two choices: Head toward Raqqa or Idleb. Both seem complicated. Opening a battle toward Raqqa, where the PYD is located, would require understandings and concessions with the Kurds, who could switch their alliances if they obtain material gains.”

Allawi added that, “Idleb’s situation is complicated as well, given the diversity of rebel groups there. Therefore, Assad entering Idleb would also require specific understandings and divisions of influence. Russia may give up some areas in Idleb to Turkey in exchange for Turkey giving up some positions to Russia and the regime, and disarming rebel groups and punishing any group that does not comply with the orders.”

The presence of Hayyat Tahrir al-Sham in Idleb is considered the greatest obstacle. Turkish Foreign Minister Mevlut Cavusoglu has previously referenced “the presence of a number of extremist groups in Idleb, which comprise a threat to Turkey and to the observation points which it has established on the Syrian side.” He said that “Turkey is working to purge Idleb of these groups and to prevent the occurrence of violations to the de-escalation zones agreement.”

Mudar Hamad al-Asa’ad said that, “Hayyat Tahrir al-Sham has a strong presence in Idleb despite its intellectual, doctrinal and military differences with the Free Syrian Army. But in the end we cannot allow the regime to get close to Idleb. Likewise, the Turkish army in the Idleb countryside will not permit Tahrir al-Sham to get close to the regime and cause fighting to erupt, which could disrupt the general situation near the Turkish border.”

Idleb also faces another danger, manifested by the infiltration cells of the Islamic State in various areas of the province, who have carried out a number of assassinations that have mostly impacted members and commanders of the Hayyat Tahrir al-Sham.

The organization’s Amaq news agency has spoken about a number of security operations in Idleb, and has published images of fighters from Tahrir al-Sham who have been killed after being put in orange robes and having their heads cut off. There have been a number of operations in Ariha, Maarat al-Nouman, and Jarjnaz, with the words “Islamic State, Idleb province, punishment and consensus.”

Can the opposition withstand the regime?

As the possibilities multiply, rebel groups are entering into their calculations the chance the Assad regime could take the military option. A number of groups are present in Idleb, most prominently Jabhat Tahrir Souria (Syria Liberation Front), which includes a number of groups, most importantly: Ahrar al-Sham, Nureddin al-Zinki, and Saqour al-Sham. Tahrir al-Sham is also present, as well as a number of groups who are part of the Free Syrian Army.

The general commander of the Saqour al-Sham group, Ahmed Eissa al-Sheikh, in a number of tweets, called for Idleb province to be fortified and to not depend on the Turks as a guarantee for the province’s protection from the regime and its allies. He stressed that the rebel groups should be a bulwark to preserve the revolution’s last stronghold.

The Turkish Yeni Safak newspaper has said that the rebel groups have a number of factors that will help them withstand regime forces, most prominent of which is that Idleb is a military haven containing thousands of fighters, as well as a popular base enclosing the rebel groups, as well as the fact that the bases of the regime and Iranian militias are not close to each other (Jourin, the Hama military airbase, and Jabal Azan south of Hama).

Idleb is also distinguished by economic factors including the continuing supplies to forces, as well as the presence of Turkish monitoring points deployed on the outskirts. Most importantly, Idleb connects geographically with a number of areas outside regime control which makes it harder to put under siege, as was the case in the Ghouta and in Daraa.