When residents were given 48 hours to leave their homes, they refused, forcing Hayyat Tahrir Al-Sham to cancel planned operations reports Al-Hal 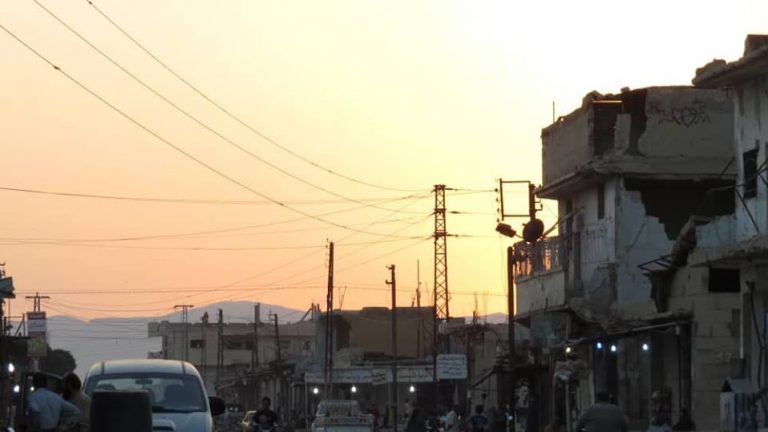 For the first time, residents living under opposition control have taken a bold step to prevent Hayyat Tahrir al-sham (of which Nusra Front is its core) from starting a battle in their area; a battle which they had announced and mobilized for. The residents’ insistence on remaining in their areas and not being displaced forced Hayyat to pull back and cancel the operation.

Residents rejected the military operation on the Kafr Nabouda axis and the surrounding area “because it has cost the factions many losses in equipment and materiel over the last few years without any notable results,” according to Fadel al-Satouf, a resident of Kafr Nabouda, who said that Hayyat “announced the military action solely on this front, without operating on the Hama countryside’s other fronts.”

Satouf said that the residents’ response came as a result of “their unwillingness to be displaced from their areas, since they have witnessed the results of previous unsuccessful military operations — especially given that Hayyat had given them 48 hours to evacuate, as well as the fact that the battles that occurred months ago in the area east of the rail line in the eastern Hama and Idleb countrysides had led residents to view Hayyat as having a role limited to the handing over the areas.”

Media activist Amar al-Mustafa believes that residents “feared the area being handed over and that the battle was a rehearsal for what Hayyat was working towards, as happened in the eastern Hama and Idleb countrysides, where Hayyat handed over dozens of villages to the regime in days and did not put the full weight of their military there. They were also worried that military action in the area would be the beginning of new fighting between the rebel groups and the imposing of control and expanding areas of influence, especially given that the axis where Hayyat decided to begin military operation is not part of the areas of its influence and it did not take part in seizing the area from the regime, nor has it even been deployed on the lines against regime forces in recent years.”

Residents have united in regards to the military action, Mustafa said, “when the action against the regime includes all areas of the Hama countryside, from Qalaat al-Madaiq in the west (in the center of which is the high-altitude al-Habousa checkpoint that overlooks wide areas that have been under an unannounced ceasefire with the regime) up to the village of Ma’an in the east, we will take up arms even before Hayyat.”

Khalid Abou al-Khitab, a military commander in one of the Free Syrian Army factions in the area, told Al-Hall that “Tahrir al-Sham has a small presence in parts of the Hama and Idleb countrysides. They are deployed in heavily populated areas in order to secure safe movement for their members, especially given that recently their popularity has declined significantly due to their behavior with civilians and their interference in public affairs, demonstrating its decline in the area.”

Abou al-Khitab stressed that if the Hayyat remained in the area, its fate “would be like the other areas which were handed over to regime forces and allied militias, such as the Damascus and Homs countrysides and more recently Daraa.” He said that Hayyat was “a peg for the regime, with Russian air support, to storm any areas in Syria where the group’s members are present.”

Hayyat Tahrir al-Sham announced on Jul. 6, 2018, that the northern and northwestern Hama countrysides were a “military zone” and asked residents — who number about 200,000 — to evacuate the area within 48 hours. Residents rejected the military action decisively, which forced Hayyat Tahrir al-Sham to cancel the operation.