There are increasing reports of Syrian refugees being forcibly returned to Syria, despite the dangers that await them writes The Syrian Observer 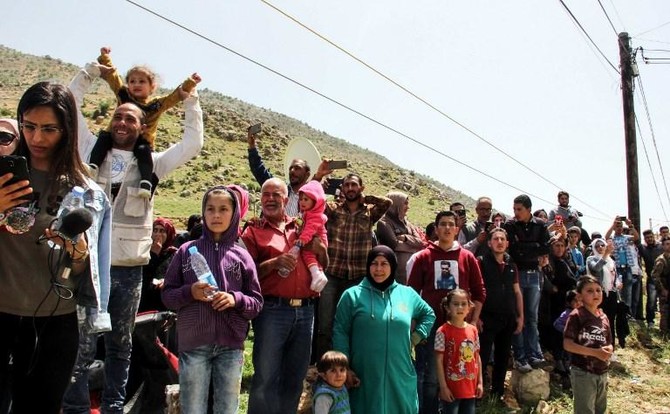 Recently, there has been talk of the possibility of returning Syrian refugees from some neighboring countries, particularly Lebanon, and to a certain extent Jordan and Turkey, irregardless of whether they voluntarily consent to return.

Last month, Lebanon witnessed a number of worrisome developments regarding the presence of Syrian refugees. Prominent politicians have increased calls for refugees to return to Syria and have made unfounded accusations about an international plot to settle them in Lebanon. At the Friends of Syria Conference in Brussels in April, Lebanon made significant commitments on the rights of refugees, including providing residency status, education and legal protection and pledged to refrain from forcing refugees to return to places where they could be at risk. These pledges could have a real and positive effect on the lives of Syrians in Lebanon – if implemented. But since then, things have taken a turn for the worse.

Sadly, no sooner had Lebanon renewed its commitment to not forcibly return refugees, politicians demanded that Syrians in Lebanon return to their country of origin. The Foreign Minister in the caretaker government, Gebran Bassil, recently gave the UNHCR two weeks to develop a strategy for the repatriation of refugees, claiming that the organization was trying to delay their return to Syria. He then froze residency permits for UNHCR staff in Lebanon – without the support of the government – accusing them of obstructing the return of Syrian refugees by "spreading fear.”

In Jordan, incidents of forcible expulsion of Syrian refugees are frequently repeated with authorities citing suspicion of links to "terrorist groups".

In its latest report, issued earlier this month entitled, "I Do Not Know Why They Brought Us Back” Human Rights Watch (HRW) documented the systematic return of Syrian refugees under the supervision of the Jordanian authorities.

According to the report, the Jordanian authorities have recently forcibly deported about 400 Syrian refugees in a single month, while about 300 registered refugees returned to Syria voluntarily during that period.

The group noted that mass expulsions had increased in mid-2016 and again at the beginning of 2017, following two terrorist attacks in the country, although there was no evidence that any of the deportees were involved.

While the situation in Turkey is still less acute for Syrians, when compared with both Lebanon and Jordan, President Recep Tayyip Erdogan reassured his supporters that the Syrians would not remain in Turkey forever, suggesting that his "open door" policy, which was activated in the early years of the conflict, had lost its validity.

A poll conducted by the Center for American Progress of Political Research showed that 78% of Turks believed their country was spending too much money on refugee care.

Human Rights Watch said authorities in Istanbul and nine provinces on or near the Syrian border had stopped registering new asylum seekers and warned of illegal deportations, forcible return to Syria and the denial of health care and education.

Meanwhile, inside Syria itself, Syrian officials are showing a false interest in the return of the Syrian refugees to the country. The government recently called for the return of refugees and passed legislation in preparation for reconstruction. The government is trying to create the idea that security has returned to Syria, despite the obvious signs that it has not. The government has two goals in mind when creating this illusion. The first is to give the image of a compassionate government that cares about its citizens, and the second is to minimize international attention to what is happening in Syria. If the number of Syrian refugees around the world is reducing, it is hoped that people will assume that the situation in Syria is improving.

Russia is now playing the biggest role in the arranging of forced returns. In mid-July, Russia announced that it had established the Centre for the Reception, Allocation and Accommodation of Refugees, which will monitor and facilitate returns, in cooperation with the Syrian government. However, Syria has not achieved the most basic standards of safety and security necessary for the return of refugees. Areas of the country are still seeing armed conflict, and there are growing fears that the government will invade Idleb. Even in areas that are largely peaceful, the threats to returning refugees still loom.

Nevertheless, the actions of the Syrian regime do not match its words. The Head of the Air Force Intelligence Jamil Hassan said that more than three million Syrians are wanted and their judicial cases were ready. He added that having such a huge number of people wanted by the government will cause major difficulty in the achieving of the plan.

According to the Syrian Reporter Website, Hassan described dealing with those who return to be like dealing with sheep. The corrupted ‘sheep’ will be filtered out and the good ones will be used, and those who are wanted will be charged with terrorism. He added: “After eight years, Syria will not accept the presence of cancerous cells and they will be removed completely,” citing a series of earlier speeches by Bashar al-Assad.

He added that more than 150,000 security files of wealthy people and Syrian businessmen who “aided the terrorists” have been complied. They will be dealt with through harassment and pressure, pending the full withdrawal of their funds, which will be used to “rebuild what they destroyed”. They will remain under house arrest by the security forces to speed up payment.

Article 33 of the International Refugee Convention of 1951 states that “No Contracting State shall expel or return a refugee in any manner whatsoever to the frontiers of territories where his life or freedom would be threatened on account of his race, religion, nationality, membership of a particular social group or political opinion.”

It is impossible to be reassured by a regime that has killed two million of its people, deported 10 million and destroyed homes, schools, hospitals and places of worship. No self-respecting government can be involved in a scheme to return Syrian refugees without their consent, until threats to their safety, security and dignity have been extinguished.