The Caesar Syria Civilian Protection Act will block companies and individuals from taking part in the reconstruction and profiting from the deaths of innocent Syrians. 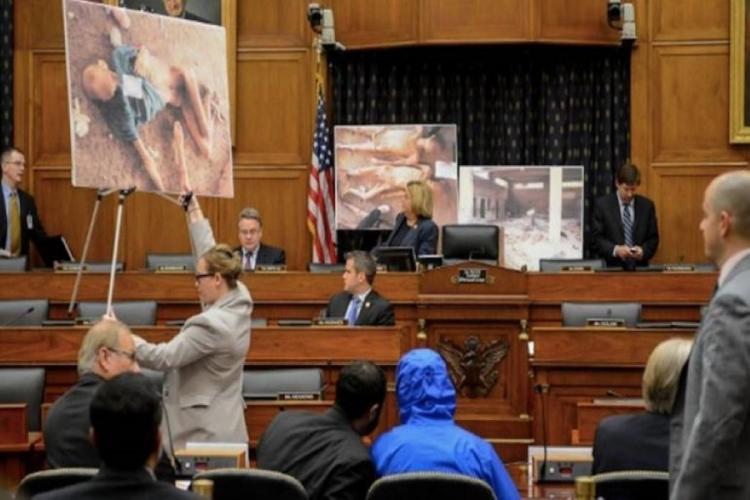 On Friday, US President Donald Trump signed the Caesar Syria Civilian Protection Act, in a new blow to the regime’s President Bashar al-Assad and all those who were waiting to cash-in on the reconstruction. This long line of money greedy hopefuls was led by Assad’s brothers, Rami Makhlouf and Vladimir Putin, but they may have lost their final hope for reconstruction.

Following approval by the House of Representatives and the Senate, and with President Trump’s signature, any company, institution, or government that carries out commercial dealings with the Bashar al-Assad regime, or provides support for the military efforts of the Assad regime in its war against the Syrians, will be punished.

These severe sanctions, imposed by law, will extend to military groups and mercenary contractors, including Iranians, Russians, Afghans, and Hezbollah’s thugs in Lebanon. But it will also affect international energy companies seeking to invest in the Syrian oil sector, and any company that provides spare parts for aircraft, including helicopters. The law also targets companies providing loans to the Syrian regime.

The Caesar Act grants broad powers to the State Department to support institutions that collect evidence and pursue prosecutions against those who have committed war crimes in Syria.

There was a time when Bashar al-Assad and his Russian allies felt that they had achieved a final victory, having destroyed Syria’s cities and bombed homes, hospitals, schools, bakeries and markets; it was now time to reap the fruits of their investments in Syria.

Syrian dictator Bashar al-Assad has clung to his throne tooth and nail, killing more than a million Syrians, including a large portion of the social base that supports him. As a result, Assad has lost part of his wealth, and the whole of the world’s respect for him. Now, after Assad imagined that he had accomplished his great victory, having destroyed as much as he could and displaced half of his people outside the borders of their country or their towns, he had been sitting in the palace waiting for reconstruction contracts to rehabilitate his image and re-accumulate his wealth, along with that of his family.

Russian President Vladimir Putin put all his cards in the Syrian basket; sacrificing his reputation as an international leader, and accepting an image as an international thug who provides protection to criminals and rogue regimes, all for the sake of political and economic influence. He also believed that he had achieved his last victory, and he was now in a position to reap the returns from his investment in Syria.

In addition to the two men, there are a large number of European, American, Chinese and Iranian companies that have set their eyes on reconstruction in Syria, which for them was to be the goose that lays the golden egg.

The Caesar Act came as a blow to everyone’s greed. What was most important about the law’s passage was that it won a similar consensus from both the Democratic and Republican parties, winning 86 votes in the Senate, which eliminated any chance for Trump to override it for the sake of his friend Putin.

The Syrian-American community contributed greatly to drafting the law and calling for it to be approved, with advocacy efforts by Syrian-American organizations and the financial support generously provided by the community.

The law will expose those companies that were intending to invest in the Syrian market in the post-war and reconstruction phase, and its effects will not spare anyone who had been drooling at that prospect. Among the companies that will be held accountable if they violate the law are the Chinese firm Huawei, Siemens and Ericsson, as well as oil and gas companies, insurance companies, contracting and construction companies in all fields, financiers, investment companies, service providers and businessmen. All of them will refrain from entering the Syrian market because they will not risk exposing their interests to the sanctions of the US Treasury.

We hope that this law will send a clear message to the Syrian dictator Bashar al-Assad and his Russian and Iranian defenders, that their dream of accumulating new wealth through reconstruction in Syria will vanish into the wind.

The passage of this law affirms a number of matters that Syrians have long considered key principles. The first of these is that crimes against humanity are not subject to the statute of limitation, and therefore no matter how many years pass, the day will come when criminals find themselves reaping what they sowed.

The second is that there is no justice without accountability, and that oppressors—no matter how long they have persisted in their strength, will one day be held accountable for the crimes committed against their people. All Syrians want a lasting political and peaceful solution, but they know that peace cannot be achieved unless it is based on a solid foundation of accountability.

Third is that victory and defeat in major historical milestones—such as the great revolutions and turning points—are not military, and are not measured by the size of the military victories achieved by this or that party. Whatever victories are achieved on the ground by a party that stands against history, and burns and destroys and seizes the houses and possessions of others—in the end these will not be victories. The real victory is measured by the extent of change brought about by a historic movement.