While both Russia and Turkey have intervened militarily in Syria, they have done so in different manners, which could lead to very different outcomes writes Asharq Al-Awsat. 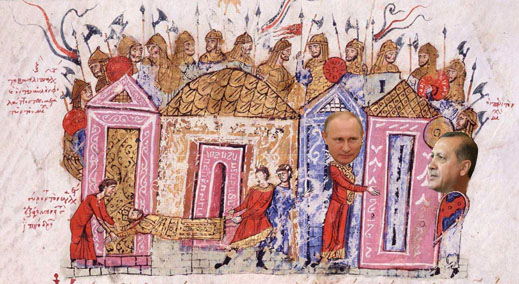 Russia has intervened militarily in Syria and here is Turkey doing the same. But how wide is the difference between the two interventions and the two approaches!

The first interference was based on an accurate reading of what is constant and what is evolving. It was based on interconnected steps that are made at the right moment and on a precise understanding of the balance of power.

The second was built on a hasty decision and erroneous estimates of climates and equations, and soon appeared to lack any legal or international umbrella.

Turkish authorities chose a poetic name for the invasion of northeastern Syria. Anyone who hears the expression, “spring of peace”, imagines that the intervention force belongs to relief agencies or the International Committee of the Red Cross, and that it provides tents to the homeless and food to the poor.

The first reactions to the operation showed that we are facing a dangerous new chapter in the open war in Syria. Ending “Operation Spring of Peace” will be much more difficult than launching it.

There is not enough space here to list the twists of the Turkish policy in the Syrian crisis. But we mention the most relevant ones, namely the success of the Russian plan to recruit the Turkish player, whose Atlantic spirit shriveled, to give way to the Astana process, buy Russian missiles and threaten to drown Europe with Syrian refugees.

When the Russian military intervention practically turned the page on the demands to topple President Bashar al-Assad, Erdogan’s Syrian dream was limited to the overthrow of the Kurdish entity, which appeared to be relying on a legitimacy derived from fighting ISIS, in addition to military, intelligence and political relations with the United States and the countries of the international coalition.

Erdogan tried to lure the United States into joining him in the “Safe Zone” project inside the Syrian border. Washington has shown resilience and postponed the decision, but Donald Trump’s administration is not in a position to engage in new conflicts, especially since Trump has already promised to bring back troops from “those silly and endless wars.”

When he lost hope of a permanent US cover for his operation, Erdogan carried out his threat unilaterally.

It is naive to say that the only reason for the Turkish military operation is Erdogan’s desire to escape from the inside, after his popularity waned and his party started to crumble. The issue is bigger and more serious. It is necessary to pay attention to the military and security establishment’s reading of national security requirements in the long term. Moreover, some of Erdogan’s opponents at home share his desire to uproot the “Kurdish belt” that is taking shape inside Syria and along its border with Turkey.

Those who follow Erdogan’s positions discover that he overestimates Turkey’s strength and the others’ dependence on it. This made him commit a serious mistake in reading the international scene. We will not be quick to recall the mistake of Saddam Hussein. The framework is different. But if a politician may commit an exaggeration in an enthusiastic election speech, he may not rely on a miscalculation to launch a military operation on the territory of a neighboring country.

Erdogan probably went too far in assessing Trump’s decision to withdraw some US troops from northeastern Syria. He considered it a US resignation from the region’s fate and an affirmation of the absence of the American policeman. Perhaps he bet that Washington would not take sides with local groups and organizations and risk old relations with an Atlantic country the size of Turkey, especially in light of the current tension with Iran. He might have considered that America needed Turkey more than the latter needed it.

Perhaps he also considered that Russia will not risk to blow up what has been achieved in the process of attracting Turkey. Perhaps he assumed that Europe would remain silent, fearing that the sultan would decide to expose the Old Continent to new waves from the “spring of refugees”.

Arab, European and international reactions showed that the sultan misjudged and misread. The adventure seems costly for the Turkish economy first. In addition, what if the Turkish army falls into a war of attrition inside and around the safe zone?

If the Syrian territory did not ignite under the feet of the Turkish army, Ankara will need to make concessions to Moscow, Tehran, Damascus and other capitals. Then what will happen if the Turkish operation is found to have given ISIS a golden opportunity to emerge again and topple international efforts for a solution that extinguishes the Syrian fire?

Rushed decisions have a high price. Erdogan is likely to return from his adventure with a drained economy and a degree of isolation to his country. The sultan ventures in a troubled region. Only if he stopped at the ingenuity of the Tsar, who is visiting Saudi Arabia Monday. The quest for stability in the troubled region is the big slogan of his visit. Relationships based on realistic reading and opportunities for collaboration despite differences… Enhancing trade exchange, oil cooperation, investment opportunities and political and diplomatic consultation…

Putin’s interview with Al-Arabiya confirmed the features of this Russian diplomacy. His ability to reap the benefits of two decades of building power, opening windows and establishing bridges.

A powerful Russia presents itself as a stabilizing force, having acquired the ability to speak to everyone. The image of a brilliant firefighter who protects his interests by pouring realism water on the embers of crises.

Realistic reading is a prerequisite for stable and beneficial international relations. Putin recognizes the importance of Saudi Arabia, Islam and the world. He recognizes their economic importance and the magnitude of the massive transformation they are currently undergoing.

At the same time, he is aware of the dimensions of Saudi Arabia’s strategic relationship with the United States, which is currently sending to the Kingdom defense reinforcements to curb Iranian adventures. Conformity is not a condition for good relations.

Saudi Arabia, on the other hand, knows that Russia is a major international player and speaks from the heart of the Middle East. The Kingdom knows that Russia’s presence in Syria gives its greater ability to influence the future of the country and the region… That opportunities for cooperation are wide, and that congruence is not a condition for deepening this cooperation.

Those were the starting points of the visits conducted to Moscow by King Salman bin Abdulaziz and Crown Prince Mohammed bin Salman. Building relationships on facts and numbers and credibility in committing to what is agreed upon.

Putin’s approach is very far from that of Erdogan. The Russian president overturned the course of events in Syria with a military intervention that did not drown him in a new Afghanistan, but made him a greater need for the countries of the region.

Erdogan’s operation in Syria threatens to lead his country to exhaustion and isolation. If only the sultan had learned from the tsar!