Turkey and Russia are slowly working towards a solution for Idleb, while also trying to ensure that they both get what they want writes Al-Arab. 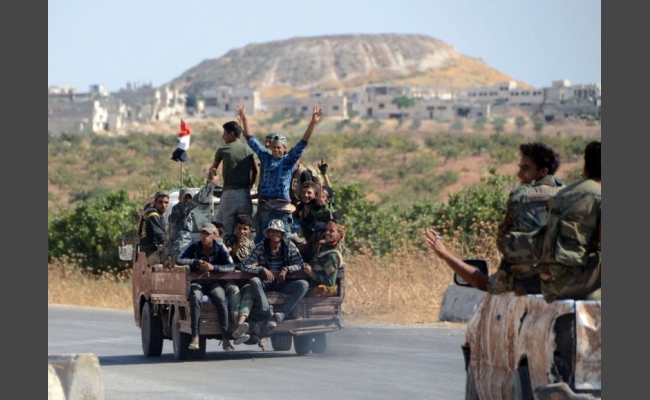 Regime militias withdrew from the city of Murak north of Hama under Russian orders and are preparing to withdraw from Khan Sheikhoun, which is on the Damascus-Aleppo highway. Turkish-Russian joint patrols are taking their place, in order to re-establish the Sochi agreement with regards to opening international roads. This shows the extent of the Turkish-Russian accord after Erdogan visited Moscow last week.

Russia imposed conditions on its Turkish partner, as well as its interpretation of the Sochi agreement for the demilitarized zone (in September 2018), by force of arms after the regime, with Russian backing, took control over the most important strategic towns on the international highway. But there is no complete clarity around the new coordination between the two sides, and so Russian pressure is ongoing through continued air bombardments on both sides of the M5 international highway, including Saraqeb and Maarat Nouman, as well as land bombardments on the al-Kabana front north of Lattakia, on the M4 international highway.

Western political support—American and European—for the Turkish position in Idleb has decline as a result of the American silence following the Russian rapprochement, with Israeli mediation, at the Jerusalem tripartite meeting. But the Turkish president, Recep Tayyip Erdogan, was still threatening the West with opening the border to a million refugees if the Europeans do not give military and political support for the security zone east of the Euphrates, when he said that Turkey is sheltering a million Syrian refugees.

Turkish and Russian agendas are not aligned east of the Euphrates, but interests do overlap in terms of putting pressure on Washington, although to different ends. Turkey wants to impose its conditions on the United States east of the Euphrates with regards to the depth of the safe zone and its observation points, with its zone of influence being similar to those of the Olive Branch and Euphrates Shield areas.

Moscow meanwhile is looking to benefit from resources east of the Euphrates and cannot confront Washington militarily. It has tried to do that and was stopped when its soldiers were killed in Deir ez-Zor in September 2017, when they crossed the Euphrates. It may prefer a bigger role for Ankara, which is easier to deal with on the outstanding issues between the two sides in Syria and with the tempting arms deals it is offering Turkey.

Moscow at the current stage is content with opening international highways and protecting its bases and its military deployment on the Syrian coast. It wants to take full control over all of Idleb and the western Aleppo countryside, but it has been delayed due to complications of finishing up the jihadist issue—especially the foreigners among them—and rebel groups submitting to the terms of the Russian-Turkish settlement through participation in the Astana meetings. It wants Ankara to take part in resolving the Hay’at Tahrir al-Sham issue as well as other jihadist groups by calling on the help of rebel groups, including the National Army and National Front.

The jihadist issue in Idleb is a major dilemma. It appears the Tahrir al-Sham is being targeted as the first step in resolving this issue. Turkey does not want it to remain in Idleb, and has taken advantage of its control over the province to delay the implementation of the Sochi agreement for the demilitarized zone and to open the international highway to the Russians and the regime without them being able to achieve many gains as a result of this delay.

In any case, Turkey alone cannot resolve the Tahrir al-Sham issue, especially given the lack of a clear Russian-Turkish deal that would ensure that the regime would not break through when moderate rebel groups fight the group.

The Russians and the regime may take on the task of ending Hay’at Tahrir al-Sham, but the price of that will be high, with the group hiding behind civilians, which will cause a wave of displacement towards the Turkish border. For this reason, the Turks will prefer to coordinate with the Russians in this matter.

Hay’at Tahrir al-Sham has been put under heavy pressure—local, regional and international—as well as splits in its internal structure, which has resulted in two wings appearing internally—the first wanting to dissolve itself and submit to the pressure, and the second being firm in resistance and rejecting the group’s dissolution, except within a framework of merging with other groups and remaining in control.

The group suffers from the weakening of the al-Qaeda jihadist ideology on which it was founded and has transformed, through its Salvation Government, into an intrusive entity that imposes tolls and buys loyalty and does not give aid to the newly displaced, which has contributed to popular anger against it.

The Idleb issue is on the way to being resolved, even if it goes slowly and at the expense of continuing Syrian bloodshed. There is an overlap between Turkey and Russia in wanting to resolve the issue and to move on to other matters. Turkey wants to resolve the security zone issue to its benefit, while Russia wants to advance in the settlement issue and to begin reconstruction and the return of refugees and has its eyes on the riches east of the Euphrates.