The image of young children in the aftermath of an airstrike on Ariha in Idleb province has brought the horrors of the regime assault back to the forefronts of people's mind writes Robert Ford for Asharq Al-Awsat. 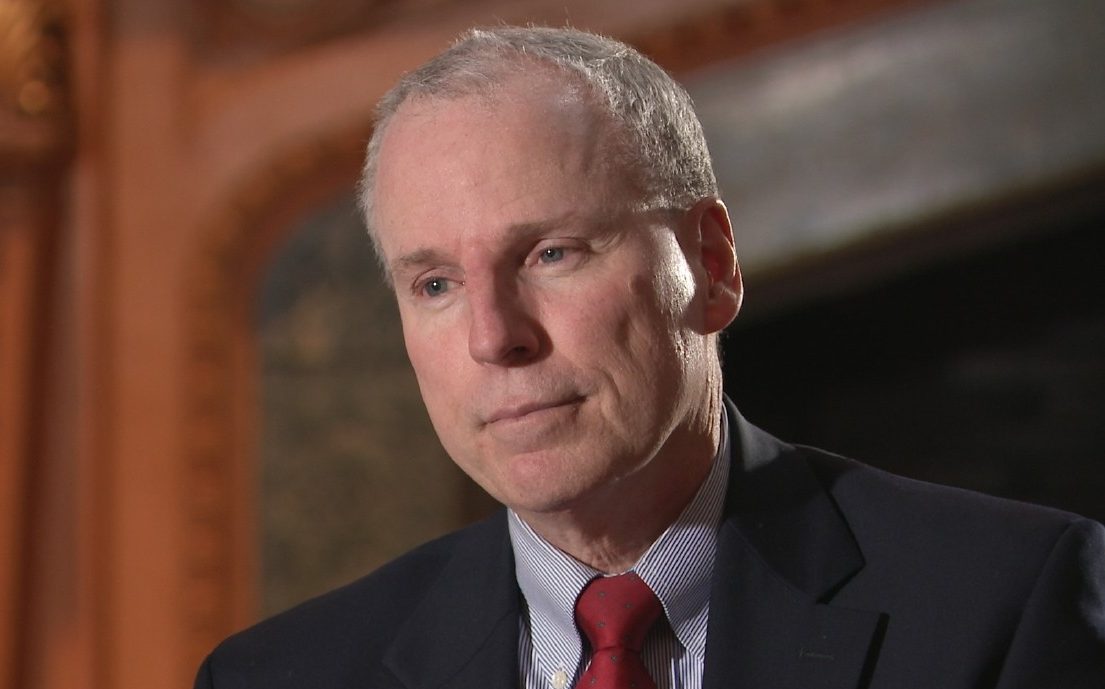 The picture of a young Syrian father trying to reach his daughter and infant son in Idlib province’s Ariha on July 24 after another Syrian and Russian airstrike was terrible and made a big impression on me and thousands of people around the world. On July 23 I saw a video of an American citizen in Maaret Numaan. She was standing in the ruins after an airstrike and she was pleading with President Trump to intervene to stop the Syrian government bombing. The State Department quickly condemned the airstrikes.

Many Syrians have told me that they expected the American military to intervene and stop the Syrian government’s atrocities. It is important that from America we be completely honest with the Syrians now. The United States will not intervene to stop the bombing in Idlib. It is fair for Syrians to ask why. I am retired from the government and I can speak frankly.

First, there is the question of international legitimacy. Normally, for a country to intervene militarily against another country, it needs either to be responding to a direct attack or it needs approval from the United Nations Security Council. Syria has not attacked the United States. And Russia and China will veto any Security Council resolution that gives the Americans permission to use American forces against the Syrian aircraft bombing in Idlib. Even American airstrikes after Syrian government chemical attacks are open to questions of legitimacy. (Of course, I have to ask those who demand an international system based only on international law and legitimacy this question: do countries that massacre their own citizens deserve to have their sovereignty fully respected?)

Second, Washington and Moscow have divided Syrian airspaces. The Russians control all the airspaces west of the river Euphrates and the Americans control all the airspaces east of the river. If the American air force begin to fly over Idlib, there is the real possibility of combat between Russian and American warplanes. No one in the United States is willing to risk World War 3 because of Syria.

Now I must also admit that when I was working on the Syria file at the State Department before the Russian intervention I did not make pressure for an American no-fly zone over Syria. We knew we would have the question about legitimacy. In addition, we remembered the experience from Iraq. The United States air force imposed no fly zones over Saddam’s Iraq from 1991 until 2003. Those air missions only ended when the American army entered Baghdad and overthrew Saddam. In 2012 and 2013 the American military in Washington during our discussions said a no-fly zone over Syria would require a huge number of aircraft and many combat missions. No one could say when the no-fly zone mission would end. We had finished withdrawing the last American soldiers from Iraq in December 2011. None of the top American officials responsible for Syria, including me, wanted to start a new, unlimited military operation in Syria.

But in 2015 American policy changed. In order to fight ISIS, the United States imposed a no-fly zone over Syrian lands east of the Euphrates river. This operation is much easier than what the American military had told us to expect in 2012; the operation is smaller but successful. Those northeastern Syrian cities do not fear airstrikes and enjoy relative security that the people in Idlib can only imagine.

Therefore, we can ask if the Americans really care about the lives of Syrian civilians or not. Emotionally, of course they do. Working with the United Nations, the Americans have spent more than nine billion dollars to help displaced Syrians and Syrian refugees outside of Syria. And there is the no-fly zone in eastern Syria. But that no-fly zone is to help the Syrian Democratic Forces (SDF) that fight ISIS. There is a sentiment in the administration, in the Congress and in much of the American media that the Americans must help SDF fighters and towns because they helped us against ISIS. No one knows how long this no-fly zone or this special relationship with the SDF will last. Experience tells me surely that it will end one day.

From Obama’s time until today the Americans keep their involvement in Syria limited. It is notable that President Trump insisted that the US would not provide much financing for the rebuilding of Raqqah after American and Syrian Kurdish forces recaptured it from ISIS. At the same time, the Americans send no aid to ease the terrible suffering of the displaced people at Rukban camp near an American base at Tanf in southern Syria. The Americans are there to block Iran from using a road there; they are not there to help Rukban. Even though the American army occupies the Tanf region and is responsible for Rukban according to international law, Washington claims Rukban is a problem for Damascus and Moscow only.

And it is also notable that Washington has banned most Syrian citizens from obtaining American visas. The Trump administration recently proposed to the Congress banning entry of any new refugees, including Syrians. So if you are a Syrian I have to tell you honestly not to expect something big and new from the United States.