As the land and air assault on the province of Idleb continues, discussions in the background are still trying to secure political advantages writes Alsouria Net. 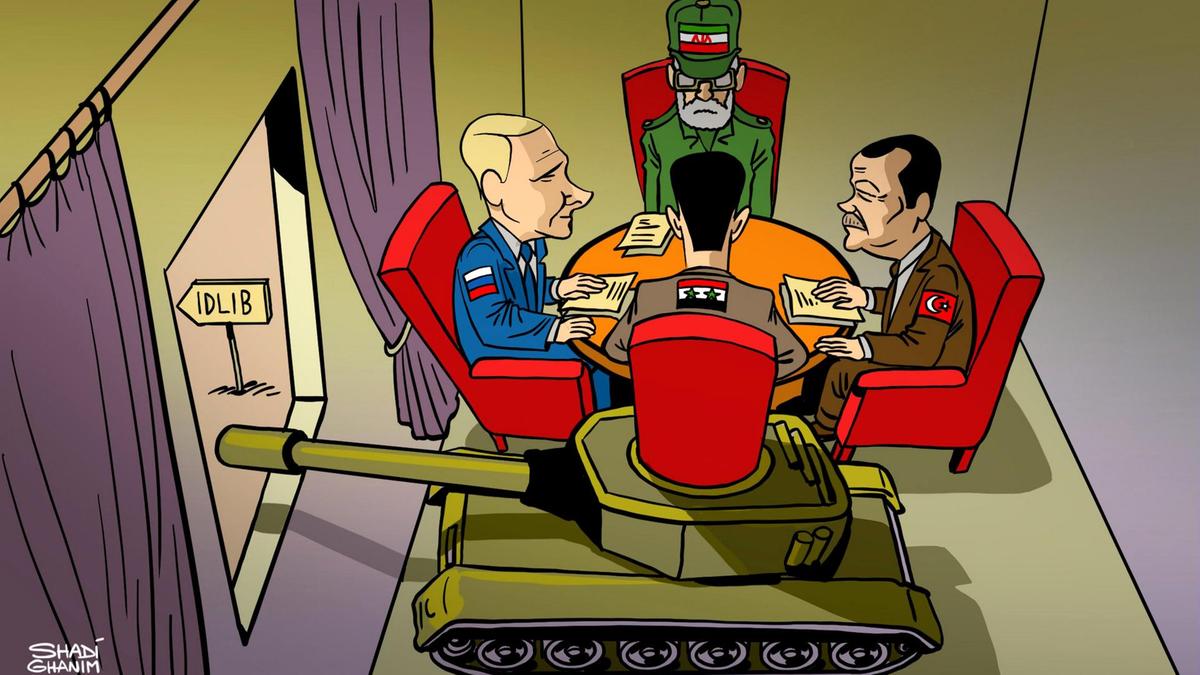 An understanding of the latest escalation in Idleb needs to be linked to the political developments which have occurred over the last two weeks.

The miserable failure of the Astana meeting with regards to the constitutional committee. This failure has pushed the Russians to become dissatisfied with the Turks because they did not put enough pressure on the Syrian opposition. It appears that Moscow is keen to have a breakthrough in this matter with the imminent arrangement of the UN Special Envoy to Syria, Geir Pedersen, to the negotiating halls to begin a new round of talks in Geneva, after the Russians inability to hold on to this issue became clear.

The Turkish-American joint statements that confirmed that the two sides are nearing an agreement on forming a safe zone in northeastern Syria after talks held by the American Special Envoy to Syria, James Jeffrey, with the Turks and Kurds.

Any American-Turkish agreement in eastern Syria would negatively impact Russia, which is working to have a role in this area, and would also give the Turks a new geographical area in Syria, outside Russian influence, giving Ankara a bigger role in northern Syria as a whole and giving them a greater ability to balance between the American and Russian forces.

The announcement by command of the Syrian Democratic Forces (SDF) that it was going to carry out indirect negotiations with Turkey while beginning preparations to resolve all outstanding problems between the two sides. These negotiations, which will be held with American mediation, are a very important development which represent a political breakthrough.

Although the contradictory Turkish conditions and Kurdish conditions will make it difficult for the two sides to reach a swift breakthrough, these negotiations have strategic dimensions on two levels—local and regional. For the SDF, this means that they have various choices to arrange the cards and not a single choice, that is, the Syrian regime. For Turkey, these negotiations, if they succeed, mean changing the arrangements and alliances in northern Syria which will come at the expense of Moscow and Damascus.

In these three developments, Turkey is playing the main role, which means that both Moscow and Washington are in great need of it to strengthen their presence and their cards in this broad region. Here we can understand the Russian military escalation on Idleb, and discuss two possibilities:

First, the Russian military escalation is part of a process of blackmail and political pressure on Ankara to prevent them from carrying out any political or military understandings with Washington that do not take Russia’s interests into account. Supporting this are the statements of the Kremlin and the Russian Foreign Ministry—and even Defense Ministry—which do not indicate the presence of a military operation in Idleb, with the excpetion of old general statements about fighting terrorism. Putin’s statement may contain evidence, when he recently said that the time was not appropriate for a major military campaign in Idleb.

Second, the Syrian regime, backed by Russia, carries out limited military operations in the Hama and Lattakia northern countrysides, and perhaps in the southern Idleb countryside, in order to keep rebel groups away from their current zones of contact or to force them to accept Russian-Turkish joint patrols as agreed at the recent Astana meeting.

It isn’t known to what extent it is possible for Russia to go militarily in this stage, especially with Turkish-American agreements. Any military pressure to change the military map in the Idleb area could push Turkey closer to the United States, which is not what Russia wants. This land military campaign, if it happens, could weaken Ankara’s ability to pressure rebel groups or direct them. As a result, the Sochi agreement stands on the edge of the abyss, and this is something that the sponsors of this agreement do not accept.