After a string of broken Russian promises, the Syrian opposition view anything that Russia says with a wary scepticism writes Geiroon. 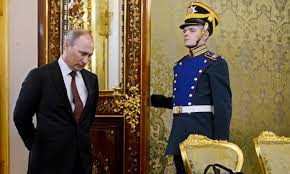 One of the most complicated questions in Syria is the extent to which Syrians should trust the Russians. They are trying to shake the ground under the Syrian political and military opposition’s feet and to shake their convictions, which are based on a bitter, tangible experience. The opposition wants to return to what was before 2012, when the Russians claimed neutrality.

Today, one of the riskiest gambles in Syria is trusting them without having tangible, practical guarantees protected by treaties from UN institutions or other major countries, who are able to uncover deficiencies and stop them when the Russians begin to play with them.

It did not take long before the “deals” that the Russians made with the opposition in Ghouta, Daraa and elsewhere were revoked, modified and passed with force. These deals did not succeed in curbing the Syrian regime’s lawlessness in these areas, and the results have not resembled those which the Russians agreed upon with the armed opposition.

Before that, no sooner had the Russians tried to convince the Syrian opposition that they were working towards a just and gradual political solution and ensure the opposition their demands as reasonable, the successive marathon conferences in Sochi and Astana proved that the Russians were trying to withdraw the solution from Geneva and move it into their court. They want a political solution that does not achieve even a minimum of the opposition’s demands.

Before that, it was not long after the claims in the first years of the revolution, when the Russians told the Syrian opposition that they were neutral, before the direct military intervention and their participation with the regime in killing Syrians. This showed that they were covering their real intentions with rapidly tumbling fig leaves.

The Syrian opposition’s bitter experiences are loaded with mistrust of the Russians and their promises. Over seven years, the Russians have tugged on the opposition’s strings, lied to them, broken promises and dealt with them with great disregard, to the extent that they make no effort to find pretexts for breaking their vows.

In Idleb, there is a new Russian agreement that promises to stop the killing. However, there is no guarantee which is tangible or protected with international treaties nor any explicit sponsor.

This does not mean that the deal should be rejected, but rather that care should be taken with it, justifications proven by all available means, and eyes kept open. Remember the French proverb, which says: “It is not wrong to trust the wolf, as long as your axe is ready.”